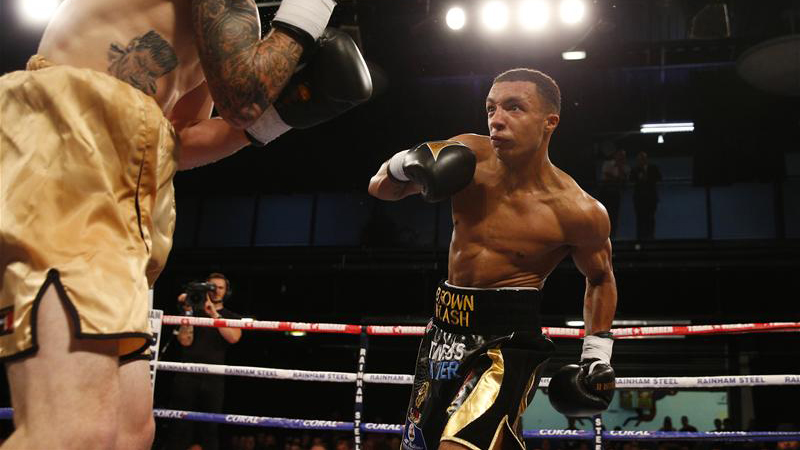 A product of the famous Collyhurst & Moston boxing club in Manchester, undefeated star, Zelfa Barrett has some pretty big gloves to lace up and follow, including the Black Flash himself, his uncle, Pat Barrett.

Just 23-years-old Zelfa, nicknamed ‘Brown Flash,’ is already creating waves having built up a thirteen fight winning streak since his October 2014 debut win over ‘Mr Reliable’ Kris Laight; of those thirteen, he has stopped seven, including his last four against Chris Adaway, Damian Lawniczak, Reynaldo Mora and Elvis Guillen.

Pat though is the bench mark, the top of the mountain, the goal which Zelfa will look to emulate. During an eight year fight career of the late eighties and early nineties the Black Flash registered 42 fights, won 37 (28 stoppages) and claimed the Central Area, British and EBU European super-lightweight titles, falling short on the grand stage losing the WBO World welterweight (to Manning Galloway).

Zelfa intends to go that one better saying: “I’ve a winning mentality in me already anyway.

“It’s just made a little more challenging because of what he [uncle Pat] has achieved. I want to go better than him, and go and win the world title for him.

“Family, whether at home or in the gym, is everything for me, it’s my motivation and, as a family man, I’ll stay living with mum [Sonia] and she goes everywhere with me, she’s a cool woman and certainly knows how hard I train.”

Coming out of Collyhurst affords Barrett that lineage and a backroom staff consisting of Pat & Myke Barrett, Paulie Da Silva, Thomas McDonagh and Chris Maylett, with the legendary nous of Brian Hughes guiding the way, and with it world class sparring.

With his next outing scheduled for December 17 at the Newcastle Racecourse Zelfa is looking to finish his busiest year as a professional in style, and doing so knowing he has helped others in their own quests along the way.

Being based in the North West means that the Brown Flash has the likes of Stephen “Swifty” Smith, 24-3(14), Anthony “Million Dollar” Crolla, 31-5-3(13), Terry Flanagan, 31-0 (12) and Scott Quigg, 31-1-2(23) at hand, the latter set to oppose Jose Cayetano for the WBA International featherweight strap the week before Zelfa appears.

“For me a fight is a fight and I’ll take on anybody, I’ll fight them five times if needs be as I’m there to do a job,” continued Barrett.

“I don’t worry about who my opponents are and if they’re there, in front of me, then I’ll be there waiting. Pat is wanting me to have a steady career and there’s some pretty big sharks out there, but only [Liam] Walsh and [Stephen] Smith are the big ones to me.

“I’ve sparred with some big names as it is and people like [Scott] Quigg, I look up to. The dedication that man has is amazing.

“Personally though, I don’t need to look at anyone else in the division though and people are yet to see the best of me. What I can do in the ring, then I tick every box and the only person I really watch is Walsh because he’s a good fighter.

“I’m already sparring with world champions though and stepping up is just that, stepping up – Pat is the man behind the plan and I dedicate my life to boxing.

“In fact the toughest contest I’ve had has to be against the Spaniard [Reynaldo Mora, whom Barrett stopped inside four rounds]. He was clever and knew what he was doing with it. It was a fantastic result in what’s been a fantastic year and I’ll continue to keep active towards the end goal.”

That end goal, for Zelfa, is to go just that one step further than his uncle Pat and claim the world title. In seriousness, the look on his face shows he means that.

“That’s what I want, that’s the big dream since I was a kid, I want that original WBC strap and I’m not bothered where I win it for I’ll fight anywhere.