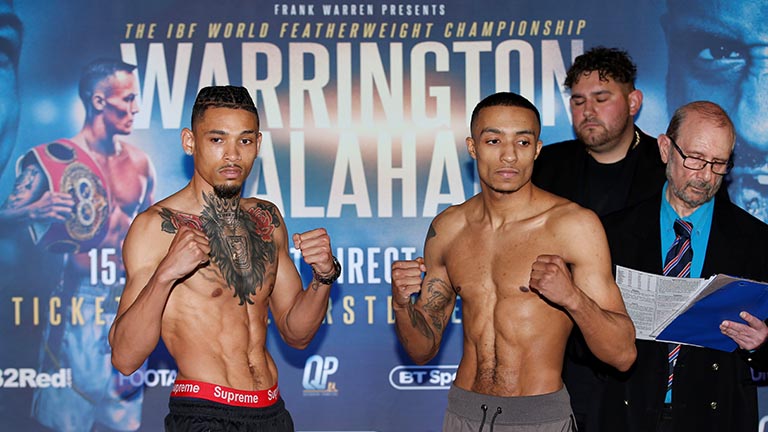 There are numerous similarities between the pair. Born within a month of each other in 1993, both grew up idolising their mothers on tough estates and both have been guided by trainers who haven’t only taught them how to box, but have also adopted the father figure role in their lives. Touted as two of the brightest prospects in Britain’s thriving 130lb division, both also suffered their first professional defeats last year.

Thankfully, at a time where most boxing talk seems to be focused on fights that aren’t happening, neither hesitated for a single second when the eye-catching matchup was offered to them.

“He’s a household name and it’s for a good title. It’s a fight people want to see and they seem to think its a fifty-fifty fight. I can only say that peoples’ reaction has been positive,” English champion, Zelfa Barrett, 25, told BN.

“I was due to have a 10-rounder against a decent opponent but the Commonwealth title is vacant and the fight got put to Pat [Barrett, his uncle and trainer]. I said: ‘Yeah, man. Let’s do it.’ I’m here now. What a great platform. I think the fight’s gonna be the main support to a Josh Warrington world title fight live on BT Sport, so why not? I believe I’ve got the beating of this kid and I believe I’m better so instead of just talking about it, why not just do it?”

Of the two, Barrett’s rise was more carefully managed whereas former Midlands Area champion, Woodstock – who trains with Ajmal “Hudge” Butt – already has a back catalogue of hard, back and forth battles. “Nobody needs to congratulate me for taking the fight. This is the problem and what people have to understand,” Woodstock, 25, told BN. “I’m gonna be real and keep it 100. The fans are getting robbed. You’re seeing fights that shouldn’t be happening and you aren’t getting the fights that should be. That goes for all weight divisions.

“A lot of people are really excited. I’ve seen a good response but I just don’t really care. I just get in there and do what I’ve got to do.”

Despite the long list of things they have in common, the winner might well prove to be the fighter who has who has changed the most over the past 12 months.

Before the relentless Ronnie Clark upset Barrett in February 2018, some observers declared that they would reserve judgement on him until they saw how he dealt with round after round of pressure. Before Woodstock was outpointed by Archie Sharp last October, the same people posed questions about his ability to pin down a skilful mover.

On the face of it, the critics were proved right but – rather than being exposed – both fighters proved plenty in defeat. Barrett climbed off the canvas and clawed his way back after Clark dropped him halfway through their fight and Woodstock bounced up from an opening round knockdown to pursue Sharp for every second of their battle.

This evening, he will once again be facing a slick boxer, while Barrett can be assured that Woodstock will be in his face all night. Both leapt at the opportunity to deal with a style thought to be their kryptonite.

“People might have thought that: ‘Oh, if you put it on him, you can beat him’ and if they have decided that that’s how it is always gonna be, I’m cool with it,” said Barrett who is now fully recovered after a serious achilles injury. “I know my style of boxing though and I know what I’m capable of. I know what happened that night with Ronnie but if that’s what people want to believe then I’ll be like a magician. I’m not gonna reveal my tricks. People can find out on June 15th. Ronnie Clark has upgraded my armour. I’m excited.

“I lost but I proved I’m fit, I have a chin, and I have heart. Every fighter thinks that they have these things but you can’t know for sure until you have them tested.”

“I’d always had a bit of ball ache with those fighters because they’re never still,” Woodstock said when remembering the battle with Sharp. “They’re always moving but since that night, a lot has changed. Things are different. It’ll be good. It’ll be fun to go out and display what’s changed.

“When I get in the ring I just know I’m going to do my thing and have some fun. I’ve grown, I’ve changed, and I’ve evolved. You’ll see some good skills and I wouldn’t be surprised if we get nominated for Fight of the Year. Again. I’m gonna start getting renowned for that aren’t I?

“‘The Lyon Woodstock Fight of the Year Award.’ Yeah, that’d be good. I’d like that.”

The physical battle lines are drawn, the key factor in the fight may just end up being who has responded better mentally to their first defeat. Losing an unbeaten tag can loosen the shackles but the threat of a second meaningful loss can just as easily tighten them back up.

“We’re sort of similar people from similar backgrounds so losing might well have motivated him more too,” said Barrett. “We can’t really go off his last fight because the opponent wasn’t really up to scratch but the defeat to Archie Sharp might have driven him to be a better fighter. I’m not worried about him though. If I do what I can do, there’s nothing to worry about.”

“I live by what I say,” Woodstock insisted. “I’m not full of this big, ego-based mentality. I always said that if I lost it wouldn’t affect me personally, it’d only highlight things to me. And it did. I’m not bothered about my wins or losses. Not one result will ever define me whether it’s a win or a loss. I’ll just do what I signed up to do, and that’s be a professional boxer and race through the ranks.”