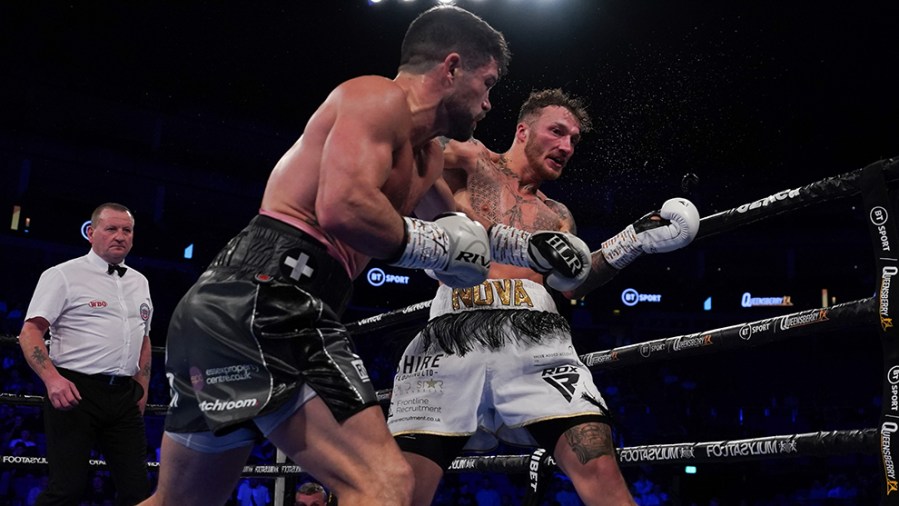 SAUL “CANELO” ALVAREZ could face John Ryder next after the Islington southpaw ended the best 12 months of his 12-year career by handing bookmakers’ favourite Zach Parker his first loss.

Parker was ruled out after the fourth round of a scheduled 12 at the O2 Arena with an injury to his right hand, a result that makes Ryder the mandatory challenger for the WBO super-middleweight belt.

Replays showed Ryder blocking a Parker uppercut with his elbow early in the fourth and the 28-year-old from Woodville, Derbyshire, said afterwards: “I couldn’t keep him off with one hand.”

Parker said he was “warming into the fight,” while Ryder’s reading of it was “the tide was starting to turn. I was getting more on top.”

Parker won the opening three for Mr McDonnell and Mr Roussel, while Mr Montella had them level after four.

Ryder landed the best punch of a close fight in the final minute of the fourth, a left hand to the jaw sending Parker’s gum shield spinning out of his mouth.

Going in, the feeling was the fight would be decided either by Parker’s youth (six years younger) and size (three inches) or Ryder’s skill and experience at top level.

Ryder had boxed 97 championship rounds compared to Parker’s 99 in his entire career and the older man was coming off his best win, a split points victory over Daniel Jacobs at Alexandra Palace in February. Parker, in contrast, hadn’t boxed for a year.

Ryder edged out Jacobs with a surge in the second half of the fight after he lost early rounds and there was a possibility the Parker fight would have unfolded in the same way.

Parker used up a lot of energy in the opening three rounds, Ryder won the fourth clearly – and there were still eight rounds to go.

For three rounds, there was only a punch or two between them.

Parker moved and switched, firing the occasional long single, while Ryder calmly looked to edge his feet into range an find his target with jabs.

Ryder’s protests about a possible low blow in the second were waved away by referee Howard Foster and Parker showed him no sympathy either, whacking him on his unprotected chin while he was distracted.

Ryder shrugged it off and went back to work.

The instruction to Ryder in his corner from coach Tony Sims was “make him work” and Parker slowed enough in the third for Ryder to catch him on the way out with right hooks.

Ryder quickened his feet at the start of the fourth and his supporters at ringside were excited when he got close to Parker and let his hands go.

Parker came back with jabs before shipping the best punch of the fight, Ryder’s pinpoint left.

Nigel Benn walked Ryder to the ring and the Commonwealth middleweight title he once held was contested on this Queensberry Promotions show. 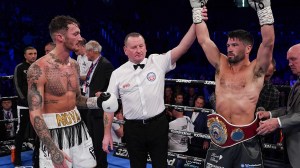 Hamzah Sheeraz brought the belt back to Ilford – where Benn was billed out of in his career – in impressive style, referee Victor Loughlin ruling River Wilson-Bent could take no more after 2-55 of the second round.

Only beaten by Tyler Denny on a split in 15 previous fights, Wilson-Bent (Coventry) had been rocked repeatedly, dropped and his left eye was badly swollen.

Sheeraz has now stopped his last 11. The 23-year-old is known for patiently breaking down opponents, but against Wilson-Bent, he was straight down to business.

There was only around an inch in height between them – Sheeraz with the advantage at 6ft 3ins – and it was Sheeraz who found his range with his lead hand quicker. The speed and force of his jabs had Wilson-Bent blinking and disorganised and the crisis deepened when Sheeraz started landing his right.

Wilson-Bent ended the first badly shaken and with blood coming from a nick on his left cheek – and Sheeraz kept drilling him with left-rights in the second.

Sheeraz pinned him in a corner and, unable to see the punches coming and with nowhere else to go, Wilson-Bent took a knee.

Mr Loughlin waved it off after he got to his feet at “eight.”

Dennis McCann and Sam Noakes – both from Maidstone and fighting out of the iBox Gym in Bromley – also claimed vacant Commonwealth titles, at super-bantamweight and lightweight respectively.

McCann stopped Glasgow’s Joe Ham in eight, a career-best performance from the 21-year-old southpaw. Ham had never been stopped before.

True, the Scot had fought only three times in the previous three years – losing two – but he was competitive against Jack Bateson over eight rounds, more competitive than he was here.

McCann, never past eight rounds before, said: “I just broke him down” and was very impressive. The starlet did a bit more in the opening three rounds as both were reluctant to make the first move,

He bloodied Ham’s nose with uppercuts and jumped through the gears in the fourth after landing a clean combination.

Ham fired back with rights, convincing McCann to call off his attack and go back to picking single punches. There was another two-fisted burst from McCann in the fifth after he dazed Ham and again, the Scot kept him off with rights.

Ham went on to finish the round on the front foot and may have edged a quieter sixth, but you sensed McCann had deliberately taken his foot off the gas and wanted the Scot to know his best wasn’t going to be enough before upping the pace again and putting him in his place.

Told by his corner to “walk him back,” Ham instead found himself pushed back in the seventh and the end came in the next.

McCann knocked Ham into the ropes with a right uppercut-straight left and this time, he kept him there until Marcus McDonnell waved it off after 2-28 of the round.

Noakes proved too strong for Calvin McCord (Ayr), dropping him four times in the fourth with body shots before Mr Loughlin waved it off.

The opening two rounds were competitive as McCord was able to find some room, but once Noakes got close to him, there was only going to be one winner.

McCord felt a body shot late in the third and had to take a knee early in the fourth from a similar punch.

Noakes didn’t let him recover, the end coming at 2-14 of the round after a fourth knockdown.

The well-schooled O’Leary had the clumsy Mungandjela down in the first and fifth with quality short punches and had him wobbly in most rounds.

Each time, Mungandjela would straighten himself and fire back. Badly shaken in the ninth and way behind on points, Mungandjela took the fight to O’Leary at the start of the 10th, but after a minute or so, the Irishman was back in charge.

THE VERDICT: Anti-climatic end to the main event but some showcase performances on the undercard