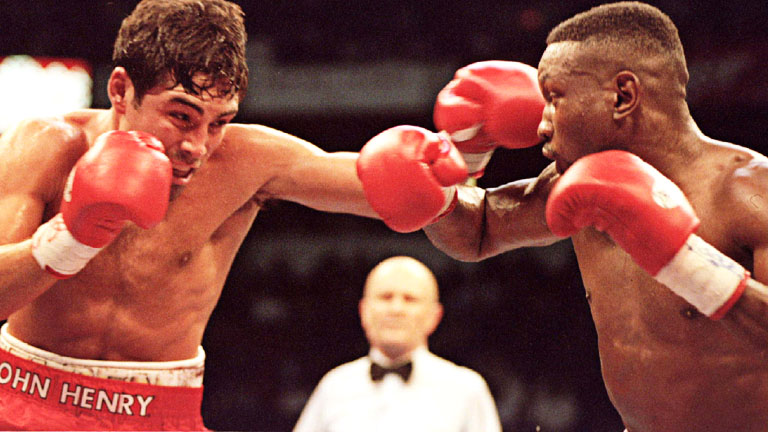 I WAS absolutely devastated to hear of the recent passing of my favourite fighter of all time, Pernell “Sweet Pea” Whitaker. I grew up in the ‘90s when fans raved about the explosive knockouts from the likes of Nigel Benn and Mike Tyson, but for me, give me a Pernell Whitaker fight any day of the week! He was simply beautiful to watch and a master of his trade. He was the definition of the old saying, ‘hit and don’t get hit.’ In my opinion, he just pips Marvin Hagler and Joe Calzaghe as the best southpaw ever. From the Olympic gold medal in 1984 to becoming a four-weight world champion as a pro, he provided a perfect example to any fighter out there of how to defend yourself properly. Pernell was a special, special fighter and will be sorely missed. Rest in peace, champ. Matt Gale

FLIP OF A COIN

FOLLOWING Anthony Joshua’s surprising defeat to Andy Ruiz Jnr in June, there is a big risk for “AJ” going straight for the rematch. I cannot help but think about what happened to David Price. He had the weight of the world on his shoulders heading into his rematch with Tony Thompson, and the subsequent turn of events had a catastrophic effect on his career. History could well repeat itself with Joshua. A part of me thinks that Joshua may be able to correct his mistakes and box the type of disciplined, controlled fight like he did against Joseph Parker. However, another part of me keeps thinking back to the Ruiz fight and how, once Ruiz adjusted to Joshua’s power and the pattern of his punches, he was handling him pretty well. Ruiz is fast, well-schooled and has deceptive power. The effect of the Ruiz body attack really took away Joshua’s legs. This rematch, therefore, really is a flip of a coin. If Joshua beats Ruiz, what happens then? Deontay Wilder and Tyson Fury are tied up with each other, and there’s the small matter of mandatory defences that are becoming backlogged. Either way, I fear the murky world of boxing politics will keep the Ruiz-Joshua and Wilder-Fury rematch winners apart. How frustrating for fans of the heavyweight division and boxing as a whole. Paul Wickes

THINGS ain’t what they used to be! Am I alone in wondering why the sport of boxing needs extra show business to accompany big fights? Dancers, singers and masked combatants during a ring walk are childish. Even some ring announcers are trying to be entertainers nowadays! They just need to introduce the boxers; we don’t need to be asked if we are ready! What next? Pre-fight ballroom dancing? Maybe five minutes of tango dancing for an Argentine fighter? Or a Flamenco dancing show before a Spanish boxer enters the ring? In the old days, dimmed lights and a simple fanfare of trumpets generated far more excitement than the concocted nonsense that fight fans now have to endure. Come back Jack Solomons! Max Winberg