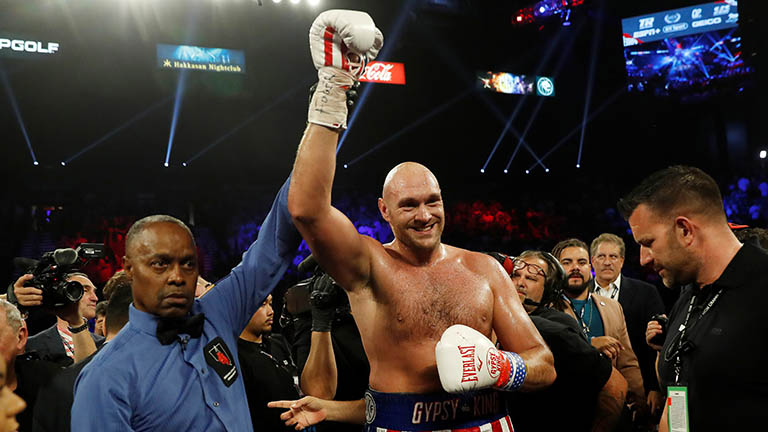 VEGAS SHOWCASE
HE came, he saw, he conquered. Just two rounds were enough for Tyson Fury to finish the job against Tom Schwarz in Las Vegas. The “Gypsy King” was not being paid for overtime. Once he was in the ring with Fury, Schwarz soon realised that he had bitten off more than he could chew. The referee was inclined to agree, as he waved the fight off when he saw that the German had become a dangerously outclassed punch bag in the corner. Having boxed with variety, venom and superior ring smarts, Fury probably landed more kisses on Schwarz after the contest than his opponent managed to land punches on him during the fight. After the victory, it was time for a song. And Fury gave that his all too, serenading his appreciative wife, Paris, in the ring. Hopefully the rematch between Fury and Deontay Wilder is not too far away. Gavin Littaur

R.I.P ISOLA AKAY MBE
THE founder of All Stars Boxing Gym, Isola Akay MBE, sadly passed away on Saturday June 15. In the 1970s, ‘80s and ‘90s, he gave hope to disaffected youths in the London area and provided a safe space for them to train. He gave them wisdom, meaning and purpose, as well as pride, confidence and direction. He taught them that there was a bigger battle to fight – the competition with yourself to be the best person you could be. He blessed me as a skinny 14-year-old in 1980 and helped me on my boxing journey that still serves me well to this day. For that I’d like to thank him. He demonstrated kindness, compassion and humour. He stood on the shoulders of giants. Cassius Campbell, All Stars Boxing Gym

BUCHANAN BARGAIN
I RECENTLY had the pleasure of reading the Ken Buchanan scrapbook, compiled by Tommy Burling and Raymond Lee, and produced and published by the Essex Ex-Boxers Association. The book covers Ken’s career from 1965-1981 and goes into great detail about his fights, including numerous press cuttings and photographs which I had never seen before. It is a great collector’s item and, priced at £10, is very much a bargain. Essex EBA have also produced and published scrapbooks on Terry Downes and Johnny Pritchett, which also make for excellent reading. Terry Sharp

RUIZ’S BLUEPRINT
IN the aftermath of Anthony Joshua’s shock defeat to Andy Ruiz Jnr, there have been rumours about Joshua’s physical and mental wellbeing prior to the fight. Whatever the rumours, what we now know is that his chin is suspect. More worryingly for him, we also now know that his conditioning and powers of recuperation are even more suspect. Full credit must be given to Ruiz, who surprised almost everyone with a fantastic display of aggression and speed. Has Ruiz shown the other heavyweights the blueprint for beating Joshua? Only time will tell. In the meantime, I wish Joshua the very best and hope that his career has not sustained serious damage. Chris Strange