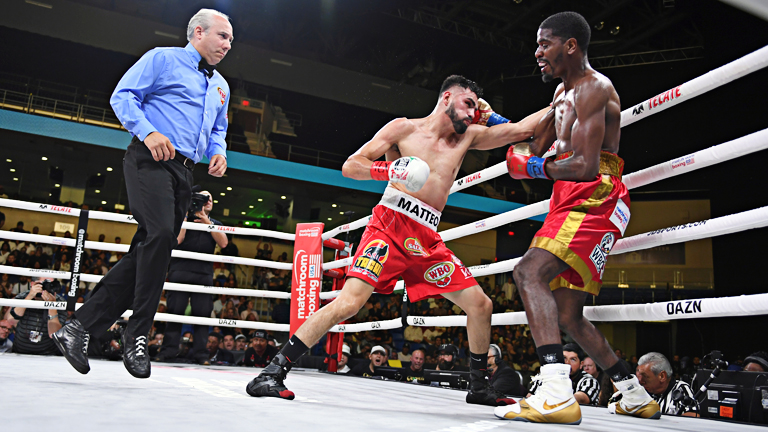 THOUGH it was irrelevant in the end, had the Maurice Hooker-Jose Ramirez fight gone to the scorecards, how controversial could the incorrect knockdown ruling in the first round have been? Clearly, the referee missed that it was a trip that caused Hooker to hit the floor, resulting in a count against him. Various sports have embraced video technology to review key decisions that could alter the outcome of an event. Surely this is something boxing could look into. A minute between rounds is ample time for a qualified referee to review incidents like a controversial knockdown and inform judges if an alteration to a call is required. After all, it is in the interests of fair play and that is all any boxer should expect when they enter the ring. Dermot Bolger

SECONDS OUT PROJECT
MY name is Antonio Risa and I’m writing to you from Rome. In collaboration with the Modavi Onlus Foundation, and under the patronage of the Italian Boxing Federation and the European Boxing Union, I would like to bring to your attention the Seconds Out project – a boxing gym for the public which will be built in in Bogota, Colombia. The aim of the project is to create a place where boxing can become a tool for integration in order to help those who are growing up in a disadvantaged environment. The project wishes to promote inclusion and the prevention of discomfort. To achieve this, we need the help of everyone who loves boxing and believes in the values it transmits. For more information and to donate, please contact segreterianazionale@modavi.it. Antonio Risa

VERY SPECIAL TALENT
WE have a very special talent on our hands in Genvonta “Tank” Davis. This young fighter is really developing and improving at an impressive rate. Even in the brief time that his fight with Ricardo Nunez lasted, his Floyd Mayweather-influenced ring IQ was evident – he let his challenger show him what he had, before working out his own keys to victory. Perhaps Genvonta’s rise to world title level initially came a little too early in his development, but now we are seeing a more polished and patient champion who still retains his knockout-seeking style. He is up there as one of the best world champions in the sport at the present time. Although he’s still young, he’s clearly the man at super-featherweight. Paul Thorpe

IN AGREEMENT
IN his letter in the July 25 issue, reader Max Winberg could not have put it better about the absurd amount of hoopla affecting most cards nowadays. The blasting out of music before and after fights, and even between rounds, can’t be good for the fighters’ focus. There’s also the growing tendency for referees to utter a catchphrase before the first bell rings. The most ridiculous in this sense is Kenny Bayless’ “What I say you must obey” line. Please! Massimo Ricci