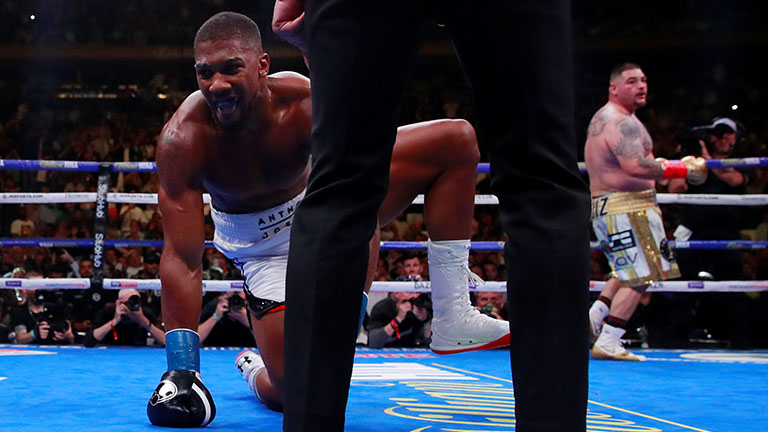 SO MUCH WENT WRONG
I HAVE been a referee since 1993. I run a boxing club and I boxed myself as a senior for 20 years. I just wanted to give my view on Anthony Joshua’s loss to Andy Ruiz Jnr last month. A lot of disruptive things happened to Joshua in the build-up to the fight. His original opponent, Jarrell Miller, failed three drug tests, then there were various rumours about who was going to replace him, until Ruiz – a better fighter than Miller – was finally brought in. So after training for a fight with Miller, Joshua had to switch things up to focus on Ruiz. It’s easy to forget that Joshua hasn’t had a huge amount of fights as a professional and he’s still essentially learning his trade. So much went wrong for Joshua, and the way he was acting both immediately before and during the fight makes you think that he could possibly have been suffering from concussion, although this has not been proved. Jack Wilson MBE

WEEKLY ROUND-UP SHOW?
NO doubt you will receive many emails about Ohara Davies’ controversial victory over Miguel Vazquez on the MTK promotion at York Hall. Whatever the reason for the decision, I hope it won’t overshadow the fact that this was a great show, with several entertaining fights on the bill. I have no knowledge of the ins and outs of broadcasting and the business behind it, however, perhaps the mainstream broadcasters could start to stream/televise some cards like this one. It doesn’t have to be shown live necessarily – a great concept would be a weekly round-up show similar to football’s Match of the Day or Rugby League’s Boots ‘N’ All. A special mention must go to Daniel Egbunike and Martin McDonagh. Not only did they engage in a great fight, but they both handled themselves with dignity after the final bell. Both prospects have a bright future. Jamie Ingleby

TOUGH TO SCORE
ALONG with many other armchair fans, I do like to score TV fights round by round while making a determined effort not to be influenced by the commentators. Midway through the Josh Warrington-Kid Galahad world featherweight title bout, I abandoned my scorecard in frustration at my own indecision. There was so little clear-cut action that I quite simply found it impossible to reach a conclusion as to who was prevailing in the rounds. My overall feeling at the final bell was that Galahad had not done enough to wrest the title away from the holder, and two of the officials agreed with me. The three scoring judges did not have the luxury of abandoning their cards and they therefore have my utmost respect. David Hibbert

NOT IMPRESSED
I READ with interest your interview with Jarrell Miller (June 20 issue) and I have to say that his denials about cheating didn’t surprise me one bit! In my opinion, the guy is a drug cheat, plain and simple. He failed multiple tests and got a paltry punishment, yet is now somehow being talked about as a potential foe for Tyson Fury, if rumours are to be believed. Boxing needs to ban all drug cheats! Owen Hollifield