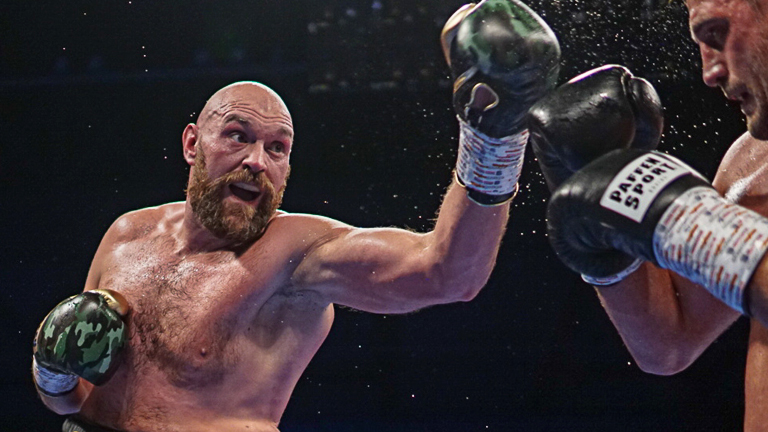 Tyson Fury explains why he was very happy with his latest performance, writes Declan Warrington

TYSON FURY will challenge WBC heavyweight champion Deontay Wilder in Las Vegas in November after easing to a 10-round victory over Francesco Pianeta at Belfast’s Windsor Park.

The 30-year-old needed only to defeat his little-known opponent to secure the ambitious fight, which will represent only the third since his comeback began in June, and was afterwards joined in the ring by the powerful American where both fighters and promoter Frank Warren confirmed they will meet.

Crucially for Fury, after the disappointment of his four-round victory over Sefer Seferi in June, in being taken the 10-round distance he was given the chance to shift much of the ring rust that would have developed during his near-three-year absence.

He will have to lose further weight and continue to rediscover his sharpness following an unremarkable performance in which he rarely hurt his opponent, but standing opposite Wilder, he vowed: “I’m going to win this man’s belt and bring it back to defend right here in Belfast.

“You can’t knock out what you can’t hit. This man (Pianeta) couldn’t land a blow on me.

“This was the performance I needed to prove against a tough opponent that I can move and box again at the best level.

“It was a calculated boxing performance as promised. Working on my boxing, get the rounds in. I’m very happy with my performance. It was a step up in opponent; I needed to box and move and still show I can go 10 rounds.

“We are two men that will fight everybody; they called, I answered, I said ‘Send me the contract’ and they sent it, I signed it. One thing I promise is that I’m knocking you the f*** out.”

Wilder, 32, and who clashed with Fury at Friday’s weigh-in, then told the former WBA, WBO and IBF champion: “It is one thing that Tyson Fury has never had. He had many belts, but he’s never had the WBC belt.

“If he ever thinks about having this belt, he better wake up and apologise to me because he’ll never have this.

“I can’t wait to fight you because I am going to knock you out. I promise you. You’ve never been knocked out but you’re going to feel the experience, what it feels to get hit by the ‘Bronze Bomber’.

“I’m happy to be here but I’m sorry to tell you that Fury will not be bringing the WBC belt back here. This fight we are having is on; it’s official, it’s on, baby.”

Warren, who has overseen Fury’s comeback, added: “All (a date and venue) will be revealed next week, but the fight is on.”

IBF featherweight champion Josh Warrington similarly travelled from Leeds to join Carl Frampton in the ring after the latter stopped Australia’s Luke Jackson in nine one-sided rounds, and Warren confirmed that they will also fight before the end of the year.

“We’re now going to make the dream fight,” he said. “It will happen, definitely this year. It’s on.”

Warrington, 27, responded: “He performed well, but listen I’m looking to get the fight, I beat (Lee) Selby and I’m still ranked behind Carl.”