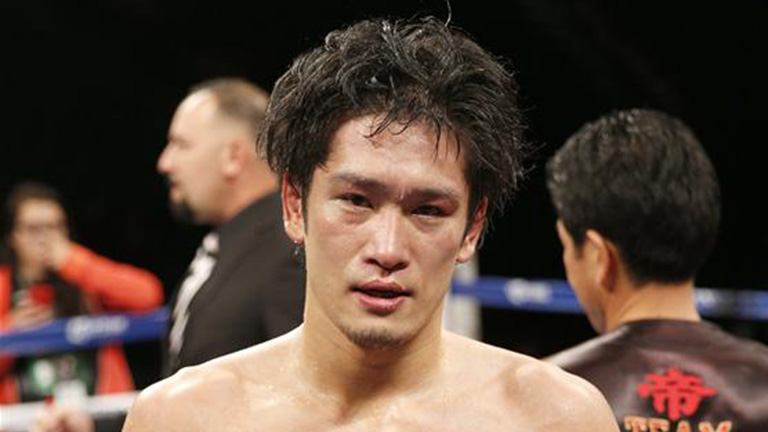 Yoshihiro Kamegai and Jesus Soto Karass pick up their slugfest right where they left it, as Kamegai walks away with the victory

THE first time Jesus Soto Karass and Yoshihiro Kamegai fought, the pair battled hard but battled to a draw. Last night, after their rematch on the Gonzalez-Cuadras undercard, it was the Japanese fighter that walked away the victory.

While neither boxer left Los Angeles with the win earlier in the year, the fight fans in attendance were treated to a war that will likely end up on the short-list of nominees for fight of the year.

Their rematch on Saturday, while fought at a much slower pace than their first fight, was the same kind of no-nonsense, no-defense slugfest that we’ve come to expect from Soto-Karass and Kamegai

When the first bell rang, the fight picked up right where the last one left off. Kamegai had a field day early on with his haymakers, landing more than the he should have on a Soto Karass that seemed to be allergic to head movement.

The Mexican, who struggled to make weight leading up to the fight, was active to the body but wasn’t able to hurt Kamegai with his shots upstairs.

Kamegai, who spent a lot of time working on his power-punching during training camp, seemed to inflict more pain than absorb it. His straight right had a reserved parking spot all night with Soto Karasss making little to no effort to avoid his rival’s best shots.

That said, no specific punch seemed to hurt Soto-Karass over the first seven or eight rounds, but Kamegai’s consistent pressure eventually took its toll and wore down his opponent.

In the seventh, a Kamegai flurry sent Soto Karass reeling back to his corner. Soto Karass resorted to the low awkward clinch and the pair almost hit the canvas as the former Mexican contender struggled to stay on his feet

After getting knocked down by a lunging left hook, straight right hand combination, halfway through the eighth, Soto Karass’ barely made it to the bell. The referree, Jack Reiss, put a stop to the fight between rounds, per his corner’s direction, before the Soto Karass was able to answer the call to start the 9th.

It may take another victory, or two, or three, before Kamegai can peel off the gatekeeper label that’s been stuck to his name. While he may never be a world-beater, or even competitive on the championship level, tonight’s victory got him one step closer to a big fight, and another decent payday, at super welterweight.

Just like there’s always a market for a high-energy opening act, a fan-friendly, all-action fighter like Kamegai will always have a home on boxing undercards, especially in Southern California and his home town of Tokyo.