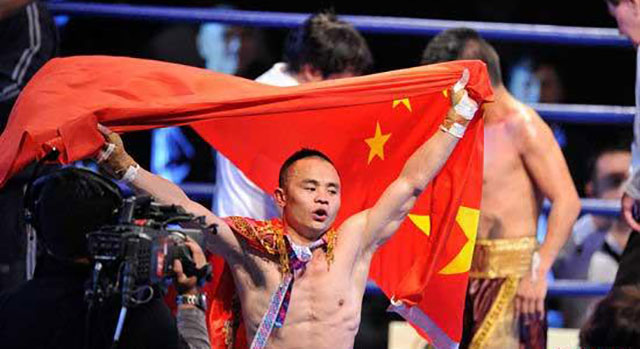 This is according to his manager Liu Gang, who says that Zhong’s status as China’s first ever professional world boxing champion has accorded him superstar status in a nation of 1.3 billion people.

“The Chinese call him ‘Mini Mike Tyson’ because he hits so hard for a small boxer,” said Gang. “We like this . . . he grew up admiring Mike Tyson.”

Packing a strong right hand, Zhong, 24-5-1 (14) won the WBC belt in 2012 only to lose it in his third defence to Oswaldo Novoa in an upset in February. Gang explained that as the fight took place during the Chinese New Year, Zhong’s mind wasn’t completely on the fight and he competed with an injured right hand.

“But now it’s different. He is training very hard to be a two-time champion. He has wild sparring sessions with two excellent Filipino fighters.”

Zhong trains in his hometown of Kunming in south-western China. Unusually, he had no amateur career to speak of, having turned professional in 2006 after just a few months of training. This is perhaps not as unusual as it sounds: competitive sport was banned in China until the early 1980s and boxing only gained a foothold in the 1990s.

When Zhong captured the WBC belt against Mexico’s Javier Martinez Resendiz in the local city stadium in 2012, there were wild celebrations that prompted local promoters to re-double efforts to grow boxing in China.

Zhong, who is 32, has given himself just two more years to box. According to Gang, he wants to “open a gym and help poor people.”

In May, Zhong got back into the winning column with a stoppage of journeyman Roilo Golez. He followed this up with a regulation stoppage of Jack Amisa in July.

In Budler, 26-1 (9), he will be meeting a boxer at the peak of his powers, having scored consecutive stoppages in his last three fights. The South African is widely considered the number one boxer in the division.

“We tried enticing the other champions, but they wanted no part of Budler,” said Rodney Berman of Golden Gloves, which is promoting the “Title Tornado” event. “Getting a former champion was the next best bet and tapes of Zhong suggest a boxer who will push Budler hard.”