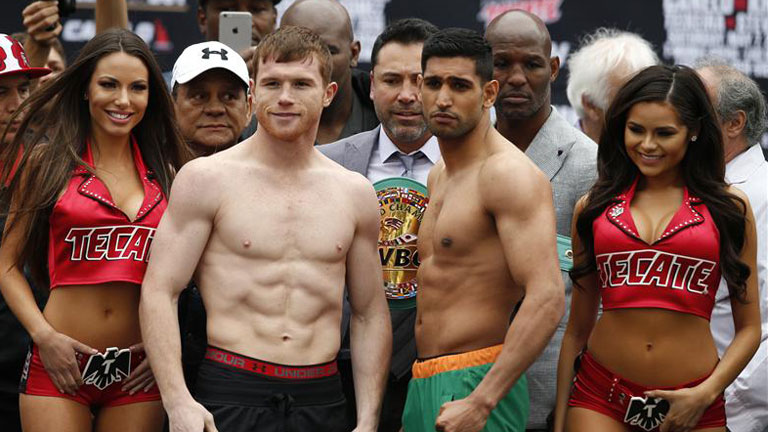 THE 2017 Annual from Boxing News is coming soon, available to pre-order HERE. We throw readers’ questions, things that they’ve never been asked before, at some of the biggest names in boxing, including Anthony Joshua, Sugar Ray Leonard, Carl Frampton and others. Plus there are features, year in review and much more. Don’t miss out.

Here is an exclusive extract from Amir Khan’s interview in the Boxing News Annual:

Would you be interested in a fight at middleweight against Gennady Golovkin?

“No, because I think middleweight is too much of a jump for me. I think Brook would say the same if you asked him since the Golovkin fight. Look, I’m never afraid to go in the ring with anyone, but there’s a life after boxing as well, so you have to be smart about what fights you take. I wouldn’t go up to middleweight and fight someone like Golovkin, because he’s simply a bigger man than me.

“I never truly knew what [moving up from welterweight] was going to be like until I fought Canelo [at 155lbs]. Now that I’ve done it and experienced it, I realise that it’s not for me. I need to stick to my own weight division, which is welterweight. You can see by my body frame that I’m not really a big guy. When Kell went up to middleweight, he seemed a more natural fit at the higher weight than I did. He was walking around heavier than Golovkin at one time before the fight. When I got in the ring against Canelo, I only weighed about 158lbs, whereas Canelo walked in at around 187lbs. That’s a massive difference there, you know.”