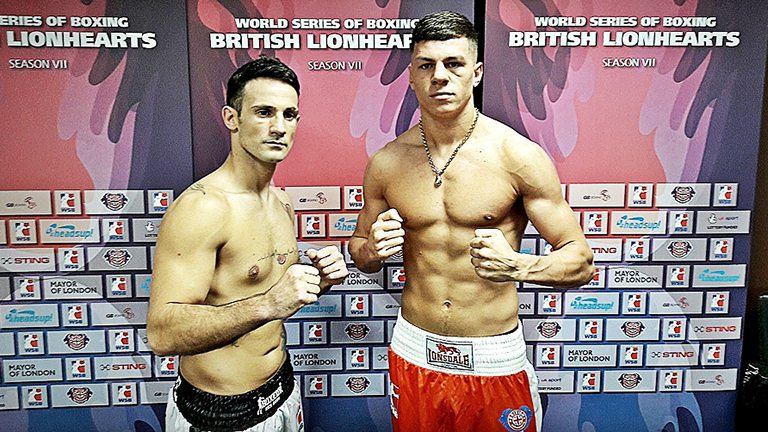 TONIGHT sees the British Lionhearts take on Italia Thunder at York Hall as the World Series of Boxing moves past the halfway point of the group stage.

With the Lionhearts sure to be intent on avenging their 3-2 defeat in Rome in the reverse fixture and Group B being close (the Lionhearts, Italian Thunder and France Fighting Roosters all being on seven points), the Italians have announced a strong team.

Boxing News has profiled the Italian opposition ahead of the match.

Facing Muhammad Ali at flyweight will be fellow Rio Olympian Manuel Cappai [below]. The Sardinian lost in his first bout in the games against eventual bronze medallist Nico Hernandez. The bout against Ali will be his first in the World Series.

The twenty-four year old with a 47-18 record has long been seen as one of the best hopes of Italian amateur boxing though he hasn’t yet managed to convert his early promise into major medals.

He was called up to the Italian national team after winning his first eight bouts and since then he has been an almost constant presence in the squad. In 2011, his first year as a senior, he won the Assoluti (the Italian national championships) and retained it in 2012 and 2013. He has not competed in it since – Italian national team boxers often focus solely on international competition after having achieved domestic dominance – thus boasting a 100% record over three years in Italy’s top tournament. In 2012 he qualified for the London Olympics at nineteen years of age, becoming the youngest Italian boxer to ever compete in the games. Despite losing in his first bout, that was further evidence of his precocious talent. The following year he reached the quarterfinals of the Worlds in Kazakhstan. An EU bronze came in 2014 but he was then banned for a year after failing to disclose his whereabouts for anti-doping testing.

Cappai is seen as the latest in a long line of very good Sardinian fighters in the lower weight classes, a tradition that ranges from the likes of Salvatore Burruni, Franco Udella and Piero Rollo to familiar modern names such a Simone Maludrottu and Andrea Sarritzu.

Relatively tall for the weight, Cappai is usually at his most effective when he has the range to use his long arms. At mid to long range his reach, hand and footspeed, and impressive reflexes can be problematic even for the very best opponents. He can be particularly sharp with his straight right. One obvious question is how his tournament-style long-range boxing will stand up to the rigours of the five-round WSB format.

The fighter from just outside Rome trains in Eugenio Agnuzzi’s ProFighting gym and has benefitted from learning his trade in a gym that has developed or honed a host of fighters – such as Domenico Spada and Emanuele Blandamura – with top international experience.

He had a relatively short amateur career but quickly made a name for himself in putting together a 42-4-6 record. Notable fighters he beat include Donato Cosenza (then Italian number two behind Domenico Valentino), Paolo Di Lernia (who went on to become a two-weight national champion), Mirko Natalizi (reigning national champion at 69kg) and Luca Rigoldi, current Italian super bantamweight champ in the pros.

As a professional he has a 9-0 (4) record and is seen as one of the best domestic prospects at the moment. He made his WSB debut in February, beating and flooring Mohamed Hamout of the Morocco Atlas Lions in a quality fight. Hamout had competed in Rio and already had WSB experience. Though the Moroccan was coming up in weight, he was arguably the best fighter Magnesi has fought.

“He’s very enthusiastic about it. It’s going to be very useful for his pro career. All his opponents are quality fighters and going abroad with Italia Thunder will prepare him well for when he has to do that as a pro.”

Magnesi has the style and professional experience to do well in the format. Essentially an intelligent and compact pressure fighter, he has the versatility to go on the back foot, fight at different distances and change stance. His outstanding attributes are probably his accuracy, excellent inside work and his composure.

A second bout on the night between Rio Olympians will see Pat McCormack square off against experienced Vincenzo Mangiacapre [see main image].

The Italian’s WSB victory against Anas Messaoudi last month took him to one hundred career victories (his record is now 100-29-2) and raises him to 12-3 in the World Series.

A few years ago it looked like Mangiacapre was going to become a leading figure in his weight class at world level and enjoy the same sort of success as countrymen Clemente Russo and Roberto Cammarelle. By the age of 23, and in the space of little more than a year, he had won European, World and Olympic bronzes.

Since then, however, he has failed to get beyond the quarter-final stage of any of the three major tournaments. In Rio he won his first bout but then had to withdraw with a fractured cheekbone. Though probably one of the top ten welterweights in the world, he hasn’t yet reached those exalted levels that were once predicted for him.

On his day he is a nightmarish proposition, extremely difficult to decrypt and hit. Often fighting with his hands at waist-height he bends and sways to avoid punches in a style reminiscent of Nicolino Locche. He switches stances with ease and his handspeed can be bewildering. His bout with McCormack will be intriguing.

The solidly-built Sicilian is only 26 but he seems to have been around for much longer, largely due to having already made a name for himself at youth level almost ten years ago. Those early successes – a bronze in the Youth World Boxing Championships in 2008 and victory in the Italian junior championships the same year – remain the most notable feats on his record. As a senior he has been something of a nearly-man: in 2012, 2014 and 2016 he finished as runner up in the Assoluti. He did, however, win Italy’s second most important senior amateur competition – the Guanto D’Oro – in 2011 and 2012.

Largely a front-foot aggressive fighter, Rosciglione can sometimes appear a little one-paced or predictable in his approach. Nevertheless, he is fit, tough  and accomplished at closing the range, frequently ducking under his opponent’s punches before springing a quick hook or right hand.

Rio Olympian Guido Vianello was the hero of Italia Thunder’s home victory over Morocco Atlas Lions back in February. With the tie balanced at two wins apiece, the 22-year old super heavyweight had all the pressure of having to win the fifth and decisive bout of the evening. He coped admirably, decking and outpointing three-time Olympian Mohammed Arjaoui.

That win took the 6’4” Vianello to 5-2 in the WSB  (46-20 overall) and was a good demonstration of both his qualities and the weaker facets of his game. He’s very mobile for his size, powerful and possesses fine technique – as shown by the perfect uppercut that dropped Arjaoui – while his tendency to drop his hands and rely on reflexes for defence means he can be caught with counters. Nor does he yet seem fully comfortable or effective on the inside. However, he appears to be very much a boxer who is steadily improving and there is the feeling in Italian boxing circles that the more he fights, the better he will get.

He will meet Frazer Clarke on this evening [above]. The two met have already met once before – in the 2014 EU Championships final Clarke beat Vianello 3-0.