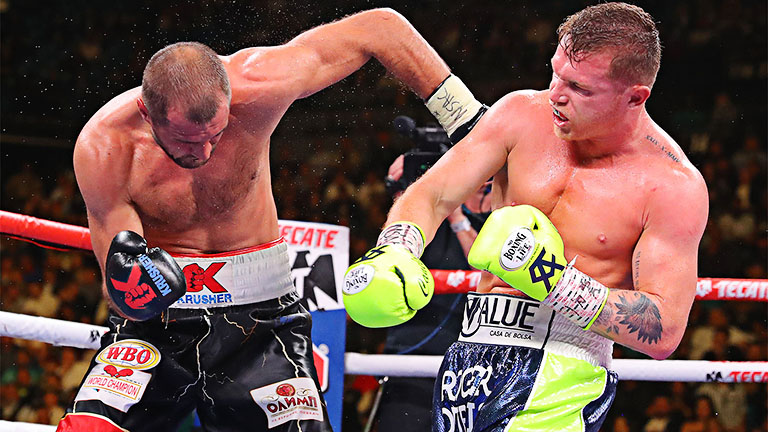 1. Canelo Alvarez
Mexican superstar Canelo scored two of his biggest wins in 2019. He defeated Daniel Jacobs via decision to unify the WBC, WBA and IBF middleweight belts, before venturing up to light-heavyweight to dethrone WBO champion Sergey Kovalev inside the distance.

2. Manny Pacquiao
They thought he was finished, or at least on the slide, yet this year Pacquiao confounded the doubters with a humbling decision over Adrien Broner, prior to an even better points victory by the veteran Filipino against WBA welterweight champion Keith Thurman.

3. Naoya Inoue
By now a cult hero, Japan’s Inoue, the WBA and IBF bantamweight champion, romped to victory in the WBSS tournament with a stunning early knockout of Emmanuel Rodriguez, followed by a hard-earned decision over Nonito Donaire in a modern classic.

4. Artur Beterbiev
Fearsome Russian Beterbiev started the year with a dominant knockout of Radivoje Kalajdzic and ended it with both the IBF and WBC versions of the world light-heavyweight title after breaking down fellow champion Oleksandr Gvozdyk in impressive fashion.

6. Errol Spence Jnr
Though Spence’s year ended badly, due to a terrible car accident, it still featured impressive 12-round victories for the top-quality Texan against Mikey Garcia and Shawn Porter, the latter adding the WBC welterweight belt to the IBF version Spence already owned.

7. John Riel Casimero
Filipino Casimero had four fights in 2019, winning each of them inside time, but it was the final one of the year, a stunning third-round stoppage of the feared Zolani Tete, which landed him the WBO bantamweight title and made him a three-weight world champion.

8. Vasyl Lomachenko
The technically superb Ukrainian Lomachenko, the WBC, WBA and WBO lightweight king, again produced exhibitions, fights to be studied, in 2019, this time at the expense of a pair of game but well-beaten Brits in Anthony Crolla (KO’d) and Luke Campbell (outpointed).

9. Juan Francisco Estrada
Mexico’s Estrada felt unlucky not to get the nod against Srisaket Sor Rungvisai when they met in 2018 but put it beyond doubt in their 2019 rematch, outpointing the Thai to win the WBC super-fly title, a belt he then retained via stoppage against Dewayne Beamon.

10. Teofimo Lopez
Explosive Brooklynite Lopez boxed no less than four times in 2019, knocking out Diego Magdaleno and Edis Tatli, before outscoring Masayoshi Nakatani and ending the year on a real high by stopping Richard Commey to become the IBF lightweight champion.

British fighter of the year: