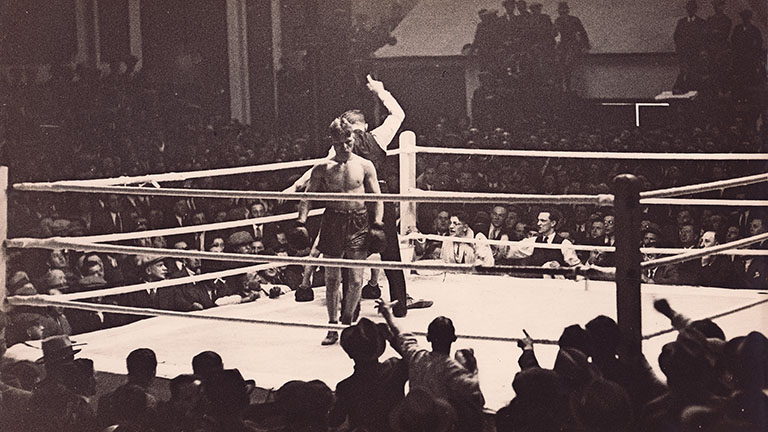 STUDY the photo that accompanies this piece. What do you see? The muscular figure striding purposefully towards a neutral corner appears on the verge of victory, and the fighter – just visible – who is having the count tolled over him looks to be in the throes of defeat. Don’t let the photo fool you.

The powerfully built boxer is Alf “Kid” Pattenden, a British bantamweight champion of the interwar years. Pattenden was age 21 when the photo was taken – at Premierland, Whitechapel, in July 1929. But his opponent, Nipper Pat Daly, was only 16.

The Daly-Pattenden match was one of the domestic fights of the year. It pitted a brilliant boxer (Daly) against a relentless, improbably tough, hard-hitting pressure fighter (Pattenden), both of whom were huge favourites at Premierland, East London’s top fight hall.

Marylebone-based Daly, known as the “Wonderboy”, was viewed as Britain’s finest young boxer. He had fought as a pro from the incredible age of nine or 10, and in the last two years had boxed the ears off most of Britain’s leading fly and bantamweights, sometimes entering two or three 15-rounders in a week. His rise to fame had been meteoric, but his fight frequency was worrying.

In his last bout, Pattenden had lost his British bantamweight title to the great Teddy Baldock in a closely contested 15-rounder. He was now keen to prove his worth for a return title fight, and a win over Daly – who lay just behind Baldock and Pattenden in the bantamweight pecking order – would greatly help his cause.

For Daly, a win over Pattenden could help smooth the way for a match of his own with Baldock, though not for the title, as a new BBBofC rule prohibited boxers under 21 from contesting championships.

But the fight was a dangerous one for the 16-year-old. Pattenden had poleaxed title contenders such as Kid Nicholson and Young Johnny Brown. He had also outpointed the superb Nel Tarleton and drawn with future world champ Panama Al Brown and world title contestant Archie Bell.

So the press critics were doubtful about Daly’s chances. “It really looks as though Nipper Pat Daly is running the risk of having his career ruined,” wrote the Daily Mirror in its preview. Even the great Jimmy Wilde, a big Daly supporter, writing for the News of the World, admitted: “I must confess that Daly’s chances are not particularly rosy.”

But Nipper Pat astounded them all in a one-sided yet spectacular 15-rounder. Aside from enduring a single knockdown – in the 12th round, as shown in the photo – he dominated the fight.

Boxing News’ report read: “Most people, including myself, expected to see the ex-champion far too strong for the frail-looking Daly. Pattenden boxed as well as he has ever done, but up until the 12th he had not won a round, for Daly outboxed and outfought him at a pace that bore testimony of his remarkable strength for so young a lad. To beat the ex-champion was a big performance, but it was also a feast of boxing in every round. It is no exaggeration when I say that Daly beat Pattenden far more convincingly than Teddy Baldock did.”

Within two months, Daly would outgrow bantamweight. The leading sports critics thought he was destined for a world title. But sadly his arduous fight schedule saw him finished before his 18th birthday. As the distinguished boxing scribe, O. F. Snelling, wrote: “He went up like a rocket, burst into sparks well before he had reached his peak, and sank into darkness.”

You can read about Daly’s life and unique boxing career in Alex Daley’s Born to Box: The Extraordinary Story of Nipper Pat Daly, available from Pitch Publishing.