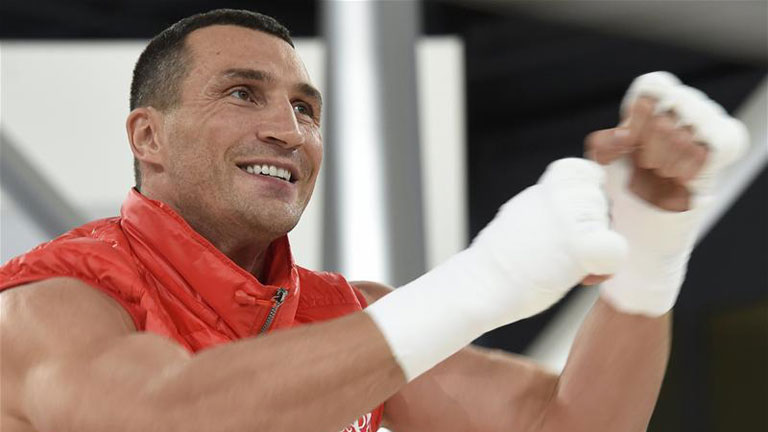 But Fury warns Wladimir Klitschko that he needs to be 'a thousand times better' in rematch, writes John Dennen

WLADIMIR KLITSCHKO is the last man you expect to launch a foul-mouthed tirade. But perhaps Tyson Fury is getting to him. Wladimir’s message to the reigning heavyweight champion at today’s press conference was a simple one. He told Tyson to “f*** off!”

Speaking at the Manchester Arena, the venue which will host their July 9 rematch, Klitschko condemned comments from Fury that have caused outrage.

“There are many people out there that are looking forward to having a champion that represents the sport in a certain way, in a good way, and also myself, that I can look up to and say, ‘You know what, he did a great job, I’m okay with that,’” Klitschko said. Referring to Fury, he continued, “I’m not okay with that. What comes out of Fury’s mouth and statements that he’s done. He’s done a lot of statements. For example [Fury said] that all homosexual men and women and paedophiles belong in the same place… All women belong in the kitchen or on their back. So that’s basically the way he sees Elton John and the Queen. To people that say and think the same way out there, and to you, Fury, I want to say f*** off.”

It was an arresting comment from a former titlist who is normally so restrained in his approach. Perhaps Tyson has rattled him. There is no doubt that Klitschko longs to reclaim the titles he once held. But whether he can outbox Fury in their return is another matter. The Ukrainian is however promising a different performance in their rematch.

“This is my first time in a long time fighting back here on British soil,” he said. “In the past months I was going through a lot of emotions, analysing certain things, understanding one thing that I can confirm – I made a mistake in the fight with Fury that was staged in Dusseldorf and that mistake cost me the titles. Of course, it’s not so easy to fight a challenger with great skills that Fury has, obviously, otherwise he wouldn’t take the titles.”

He only elicited a mocking response from the Englishman. “It seems that Wladimir has found his b******* from somewhere,” Tyson scoffed. “What can I say? He got beat the first time fair and square. He can make all the excuses: ‘I was having a bad day my fingernail broke.’ Who gives a s*** what happened to your fingernails? You got beat fair and square the first time, in Germany, on your own turf, all your own stuff, in front of all your own people, on your own TV station and you got whupped, let’s face it. You’re going to have to come back a thousand times better because you landed about four shots in 12 rounds. You might be going down as a hall of fame fighter but you’re a hall of dogs*** fighter in my eyes.

“The reason why he was so victorious in 11 years is because he never fought anybody who had a pair of b******* to fight back. He always fought men who didn’t want to win, who were turning up for the money but when Team Fury bowled through the doors in Germany, he knew that he couldn’t get away with his cheating antics, cheating with the ring [they tried to put in extra padding that had to be removed], the gloves. So many bulls*** things that he had to do to try to win. But as soon as that went down he knew he couldn’t win. Because when it’s fair and square, he can’t win. Simple.”