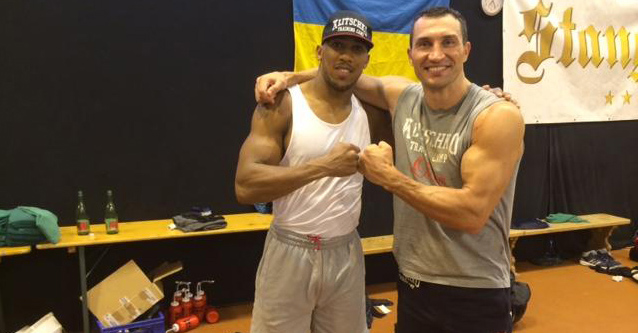 The two Olympic gold medallists, Klitschko and Joshua train together in camp

WLADIMIR KLITSCHKO, the holder of WBO, WBA and IBF heavyweight titles, has been sparring with fellow Olympic gold medallist Anthony Joshua in his current training camp.

Klitschko, a dominant champion and clearly regarded as the best heavyweight in the world today, is preparing to defend his titles against Kubrat Pulev on September 6 at the O2 World Arena in Hamburg, Germany.

Klitschko won his Olympic gold medal in 1996. Joshua, who triumphed at London 2012, is just starting out his professional career. 7-0 (7) so far, this kind of sparring will provide invaluable experience. Joshua is expected to box on the September 13 show in Manchester.

For more news, features and interviews, including an article on how to train like Wladimir Klitscko, don’t miss this week’s issue of Boxing News magazine