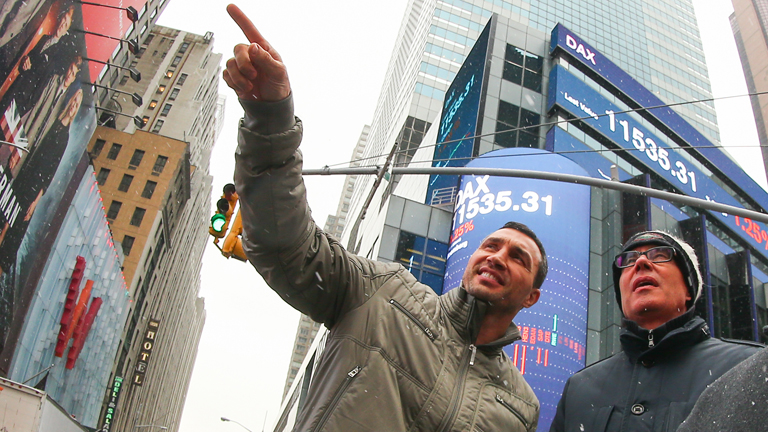 DOES Wladimir Klitschko need to take the Anthony Joshua fight? He’s had a well-remunerated and hugely successful career, ruling the heavyweight division for 10 years. Tyson Fury befuddled him to seize his titles and now the Ukrainian, a venerable 41 years old, has been out of action for well over a year. Not the ideal run in to taking on the power-punching rising star of the sport, Anthony Joshua.

But, appearing on Sky’s ‘The Gloves are Off’ programme Klitschko gave every indication of relishing challenging the British hero and IBF titlist in a packed Wembley stadium on April 29.

“If the loss against Fury hadn’t happened, I wouldn’t be here. He wouldn’t be champion,” Klitschko shrugged. “We will see on the 29th the truth, what works and doesn’t… History and momentum are advising us to take this challenge because otherwise it could be too late.

“It’s amazing to watch for the fans. This is once in a lifetime, to watch two Olympic champions fight each other.”

Klitschko is adamant his “practical experience” will make the difference. He believes he has been in a similar situation, citing his first fight with Sam Peter as an example. “I’ve been fighting guys that had a great record of knockouts, the Samuel Peter fight, he was totally hyped up as the next champion. I was dead man walking, that’s literally what I was called,” Klitschko said. “I was on the floor multiple times during this fight and nobody thought this was going the distance. So you never know.”

But that was a long time ago. “I’m totally away of all the jeopardy and danger and all of this,” he acknowledged. “It’s an absolute extravaganza… I’m just happy about it so you should be too.”

He expects to enter the stadium to boos, but hopes to leave to cheers. “In sport there’s only one language – your performance,” he declared.

Addressing Joshua directly, he said, “If you win I will congratulate you. When you lose I will help you to come back.”