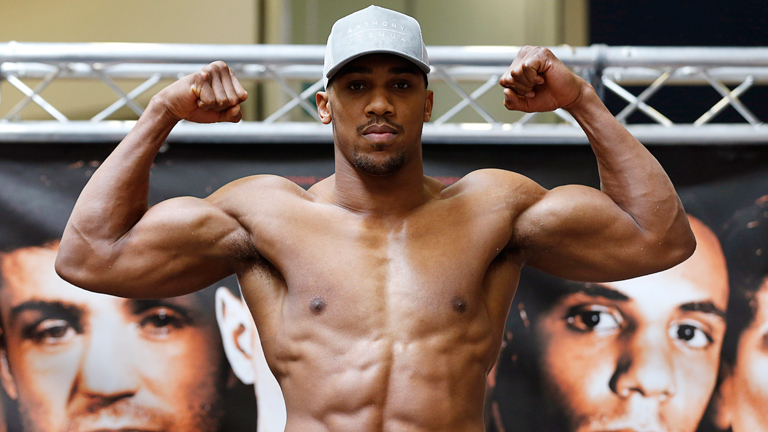 WLADIMIR KLITSCHKO was surprised at the size of Anthony Joshua when the two came face to face earlier today at the final press conference for their heavyweight unification title fight on Saturday.

The mutual respect that has propelled the promotion was evident throughout the day, though there was an underlying tone of menace as the two giants prepare to fight in front of 90,000 fans at Wembley Stadium.

Klitschko, 41, was in good spirits and chatted away with Joshua during the obligatory head to head – and asked the unbeaten Londoner what size t-shirt he was wearing.

“We know each other well. Now we’re standing before our biggest challenge, for both of us. We prepared well, I can tell. I’ve never seen AJ as big as he is now, he’s as big as Arnold Schwarzenegger,” he said.

“There could be a lot of questions and answers and I think we’re pretty much done with this. As fighters, we’re looking forward to the challenge. It’s not long to wait anymore.”

Vastly experienced and having ruled the banner division for almost a decade, ‘Dr Steelhammer’ is known for his pre-fight psychological warfare.

He insists he is not engaging such tactics with Joshua, a former sparring partner, though he has recorded a pre-fight prediction and saved it onto a USB, which will be put on auction for charity.

“This is not about mind games, this is my game that I wanted to bring over. I don’t know if it’s stupid or smart. I am extremely confident. Comfortable and confident,” he said.

“I have done it all, there is always something new to learn, but I am focused, concentrated, maybe a bit nervous, but very confident and very comfortable.

“It is not Anthony Joshua’s style that makes me confident, It’s really not about that. It’s about my own peace and why worry?

At his advanced age and with a Hall of Fame-worthy body of work, Klitschko has frequently been asked about retirement, particularly in the wake of his upset loss to Tyson Fury in 2015. He states that, throught his entire reign as world champion, he never looked beyond his next fight – and he’s not going to change that stance now.

“My world right now is very small,” he admitted.

“My life is ticking until Saturday night, I have no plans for afterwards. It’s basically, waking up with the same thoughts and concentration. I start to visualise images and understanding of experience how AJ functions. I understand the circle of life, I’ve been there, I feel it.”