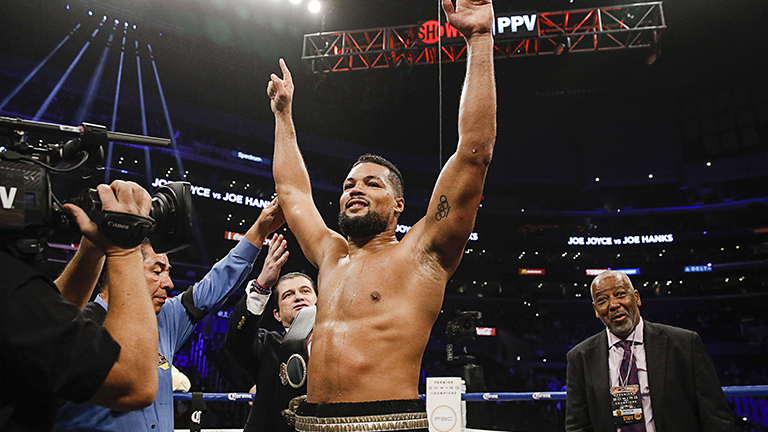 After signing with new promoter Frank Warren, Joe Joyce outlines his plan for what comes next

JOE JOYCE is unafraid to travel. He’s been to America both to fight and to train with Abel Sanchez in California. But he will return to England to link up with new trainer Adam Booth and new promoter Frank Warren. It’s both a return and a new start.

“I think I’ve found my permanent home now. I picked up things from all my coaches and going forward that’s obviously going to benefit my career. But now I’m working on a lot of head movement and footwork. I’m only two, three weeks in but I’m doing a lot more pads than I was doing in Big Bear,” Joyce said. “I think he [Booth] likes generating power from the legs and after I’ve finished punches I’m learning to come off at angles so I don’t get hit with silly shots.

“It’s more that I’m adding more tools to the toolbox and more weapons to the armoury. It’s not so much a reinvention but a fresh start where I’m adding to my game.”

“I probably haven’t got too many years left so I need to get on with it,” he added. “I think I’ve three or four years left in me. I’m quite fresh at 33, only had eight bouts with eight KOs.”

While Joyce will have his first bout on a Frank Warren promoted show on May 18 on the Billy Joe Saunders undercard in Stevenage. There has been much speculation that Joyce is building towards a British heavyweight title fight with rising star Daniel Dubois. Hopes have been raised for that fight to take place on July 13 at the O2 in London and, while Joyce does expect to compete on that show, it is by no means confirmed that it’ll be against Dubois.

“We want [Agit] Kabayel for the European [title] on July 13,” Joyce said. “I want to go for world titles and maybe the European, the British is not a huge target and I already have the Commonwealth belt.

“I want to move up and forward, the British is always an option but it is possible that I miss it out, we will see.”

He’s quite happy to box Dubois and is familiar with him as a fighter. “He still is very young and I thought mentally he’s not quite there yet. It’s obviously an interesting fight. Everyone thinks I’m going to fight him next,” Joyce said.

“Dubois has much more to gain from our fight than me, if he knocks me out he is suddenly in line for the WBA regular and the European [titles] but if I beat him then I have only beaten a kid. It’s more of a risk for me.”

But he adds, “I think I am a lot more mobile, with better movement and a better boxing brain than him and I am mentally stronger. His only hope is a lucky shot.”

Firstly Dubois ought to have a fight to get through on Saturday. He is due to fight at Wembley Arena on April 27, though his scheduled opponent Richard Lartey is having issues getting a visa, so whether he can make it to Britain in time for the weigh in, or if a replacement can be found, or if Dubois will box at all, remains to be seen.