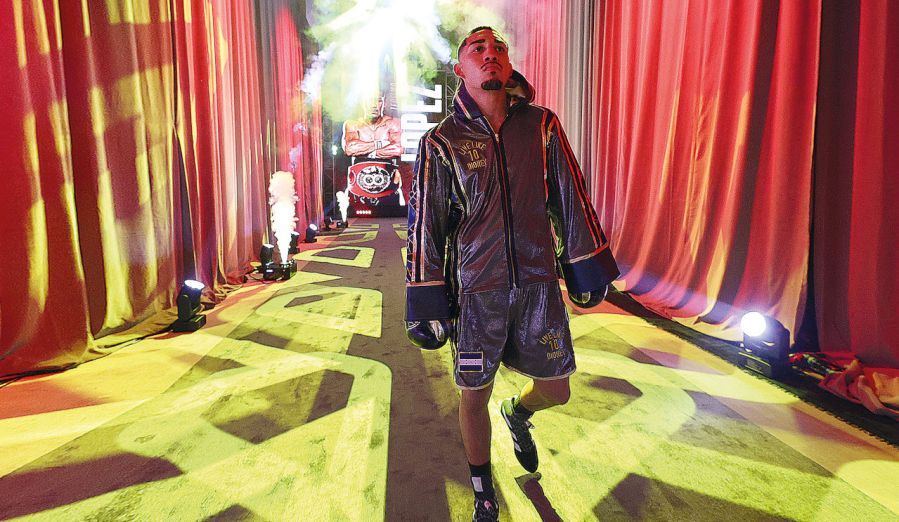 It is Thursday afternoon, five days after Teofimo Lopez outpointed Vasiliy Lomachenko at the MGM Grand in Las Vegas to unify the lightweight division, and David McWater, a boxing manager of relatively recent vintage, is sitting in his New Jersey home racking his head, trying to articulate why he was not able to fathom any other outcome than the one that ended up unfolding on the previous Saturday night.

Lopez, a cocksure 22-year-old Honduran-American, broke down the seemingly shatterproof Ukrainian wiz Vasiliy Lomachenko over 12 rounds to earn a surprising unanimous decision. All three judges scored it comfortably for the youngster (though Julie Lederman was seemingly too casual with her 119-109 scorecard), who is now the lightweight division’s fully unified champion.

McWater manages Lopez, has guided him since he joined the professional ranks in 2016 on the heels of a stellar amateur career, so it seems merely a matter of course that McWater would envision only the rosiest of scenarios for his charge. What is a manager if he is not also his fighter’s biggest booster?

But McWater isn’t always composed in such circumstances. Typically, he is fraught with jitters, doubt-addled, in the moments before one of the seventy-odd fighters whose careers he is responsible for shaping ducks through the ropes. “I get real nervous before fights,” he said. October 17, then, was the exception, though that’s not to say that there weren’t real concerns leading up to that night.

“We had some issues with Teofimo’s wrist [going into the fight] so that worried me a tiny bit and his ankle was bothering him so he couldn’t do any of his sprints the last week,” McWater admitted, conscious perhaps of new reports swirling around that Lomachenko went under the knife after the fight for a supposedly damaged right shoulder. “But I know how tough the kid is I figured he’d fight through it, and you saw it in the 12th round. It’s one of the best 12th rounds I’ve ever seen. He hit the guy 50 times [per CompuBox] in the last two minutes.”

Numbers are important to McWater, more so than, say, feelings. Numbers, like the 50 punches that Lopez landed in the final round, or the “first seven rounds that were whitewashed” by Lopez and which tilted the probability of winning the bout vastly in his favour, mean everything to McWater. Numbers, in the end, are what account for his confidence, why he knew, as opposed to felt, that Lopez was going to win that night.
“It was thrilling,” McWater said of the victory, “but for us it wasn’t unexpected. We always felt we had the better fighter. He’s a once in a lifetime kid. You’re just not going to find other people like him. We think he’s going to be a legend.”

Hyperbole? Perhaps. But there’s also a smidgeon of truth there, argues McWater, who points out that he hasn’t changed his tune since Day 1 of signing Lopez out of the 2016 Olympic trials. He has crunched the numbers, and the numbers paint a fairly compelling story. There’s a particular statistic that McWater likes sharing. According to him, up until 2016, there were only six fighters in the past 35 years who had won a national Golden Gloves tournament, a US nationals tournament, and had fought in the Olympics, all before the age of 22. Their names are Devin Vargas, David Reid, Ricardo Williams, Demetrius Andrade, Deontay Wilder, and Floyd Mayweather Jnr.

“This is an elite group to be a part of as prospects,” McWater said. “If you could sign all six of those guys, you would accept that Vargas and Williams are screw-ups [Vargas had poor promotional representation and Williams got busted for cocaine possession] and Reid got injured [suffered a career-ending detached retina].”

If the first three names are now obscurities, the last three, for the contemporary observer, are common knowledge. Andrade, for all his self-inflicted promotional wounds and antiseptic style, is a two-division titleholder and multi-millionaire; Wilder, until recently, was one of the longest reigning heavyweight titleholders in recent memory, and Mayweather is, well, Mayweather, or TBE, as he would say.

So when 2016 rolled around, McWater was stunned to discover three amateurs had met the above criteria: Gary Antuanne Russell [the brother of longtime featherweight titleholder Gary Russell Jnr], super-welterweight Charles Conwell, and Teofimo Lopez. In addition to Lopez, McWater signed Conwell to managerial contracts. [Russell is signed with Al Haymon].

“I still say that they’re the best in that class,” McWater said. I know [former featherweight titleholder] Shakur [Stevenson] is way up there and [welterweight contender Jaron] ‘Boots’ Ennis has done great, but today, if you said it’s a draft and you get the first three picks from that class, I would still take Teofimo, Conwell, and Gary Antuanne.”

Statistical analytics is nothing new in professional sports, having infiltrated front offices by storm since MLB general manager Billy Beane started implementing “sabermetics” with the Oakland Athletics, but it remains largely unused in the domaine of professional boxing. The exception, it appears, is Split-T Mangement, the name of McWater’s managerial firm which he started in 2014. Split-T may not boast the biggest talent roster in the sport nor is it the most recognised, but it is probably the most aggressive managerial entity in America at the grassroots level of boxing, thanks, in no small part, to its data-centric methodology. (McWater, in a former life, was an agent for MLB and NBA players). Using a proprietary algorithm based on decades of amateur boxing data stretching back to 1984 (think Golden Gloves, US Nationals, and Police Athletic League), McWater, with his small team of earnest scouts, are able to decide, to the decimal point, which aspiring pros to sign, which ones to avoid. Analytics is his Big Bertha.

The idea is to figure out, as concretely as possible, which amateurs stand the greatest chance of having success in the pros, the pinnacle of which, as McWater defines it, is fighting for a world title. There are many factors that McWater’s calculations rake in, including, but not limited to, a fighter’s age, the strength of his opposition, timing of his fights, whether or not a knockout is verifiable, the type of victory it was, how many wins he had in a row, what level of fight it was at a particular tournament, etc. When McWater ran his “best formula” on Lopez, Conwell, and Russell, all three returned scores in the 80 per cent range.

“The average prospect has a 10 per cent chance of fighting for a world title,” McWater said. “Shakur [who won a featherweight strap in his 13th fight] was like 71 per cent. I know that sounds like, ‘Oh my god, it’s so much less than [Lopez], but 71 per cent is still completely off the charts. At 30 per cent we will follow you around and recruit you. 10 per cent is the average of guys who get signed by the big promoters. At 30 per cent my guys will follow you around, like ‘we’re interested.’ We start taking you to dinner. At 70 or 80 per cent you’re completely insane. Anyone over 50 per cent you’re just off the hook.”

“So when you start [rating] guys in the 80s in a promoter neutral environment and you put them in with promoter like Top Rank, it’s almost a mortal lock for him to fight for a world title, and of course, Teofimo did, basically in record time.”

All of which reminds McWater that he’s on the right track, a satisfying feeling in what is an often bewildering sport. “Yeah, it’s very vindicating,” McWater mused. “There were major promoters that turned down Teofimo coming into the pros. Roc Nation turned us down flat, Golden Boy turned us down. Yeah, definitely vindicating.”

McWater wants Lopez to stick around at 135 and potentially pursue what he deems are marketable fights with the talented Devin Haney and Insta-star Ryan Garcia. Barring that, a move to 140 is possible, but only in the event that Lopez gets the right to face the winner of the Josh Taylor-Jose Ramirez unification. (As for Lomachenko, McWater, annoyed by the Ukrainian’s supposed excuses, quipped, “We don’t give a s**t what that guy says. We didn’t take him that seriously before then, we’re not going to start now.”)

Meanwhile, McWater keeps churning the numbers, finding new wrinkles, getting ever closer to that Pythagorean perfection. The results have been illuminating. One study his team ran centered on finding the right age in which an amateur should make the leap to the pro game. The “sweet spot” he discovered is anywhere from 19-21.

“Kids who turned pro at 17 did about 30 per cent worse than their matched group,” McWater revealed. “And at 18 it’s about 10-15 per cent. I’m not saying that we’ve haven’t taken anybody pro at 17, we have, but only when if we didn’t do it they were going to sign with somebody else. But there’s always a worry if you have somebody turning pro at 17, always a worry. You don’t really know the man you think that person is going to become.”

Such are the inherent risks of doing business in a cutthroat pursuit teeming with rapacious middlemen. In an ideal world, McWater would only sign fighters only after they’ve had 15 fights under their belts. Nevertheless, McWater claims he has signed more national Golden Gloves and US national winners in the past four years than all of the other managers combined.

“There a lot of guys on our roster that we expect big things from. I would be disappointed if a third of these guys don’t fight for world titles,” McWater said. “Stephen Shaw, Brian Ceballo, Antonio Vargas, Ardreal Holmes, Ivan Baranchyk [who, in fact, briefly held the IBF super-lightweight title], Diego Pacheco, Otho Jones III, Abraham Nova, Sonny Conto, these are all guys we think will be world champions.”

The image of the typical boxing handler is rarely complimentary, as it conjures up noirish stereotypes of middleman who wear oversized pinky and walk around in a perpetual cloud of cigar smoke. By hewing to a more scientific – but no less passionate – approach, McWater is aware that he is giving the traditional image of the boxing handler a positive revision.

“The old sort of image [of the manager] was that you owned the kid, that you owned his contract,” McWater said. “That’s not really what we’re into. Obviously they pay us a percentage just like any agent, but we treat them more like as sports agents, treat them like clients. That’s the best way to put it.”

To read our latest features subscribe to Boxing News magazine