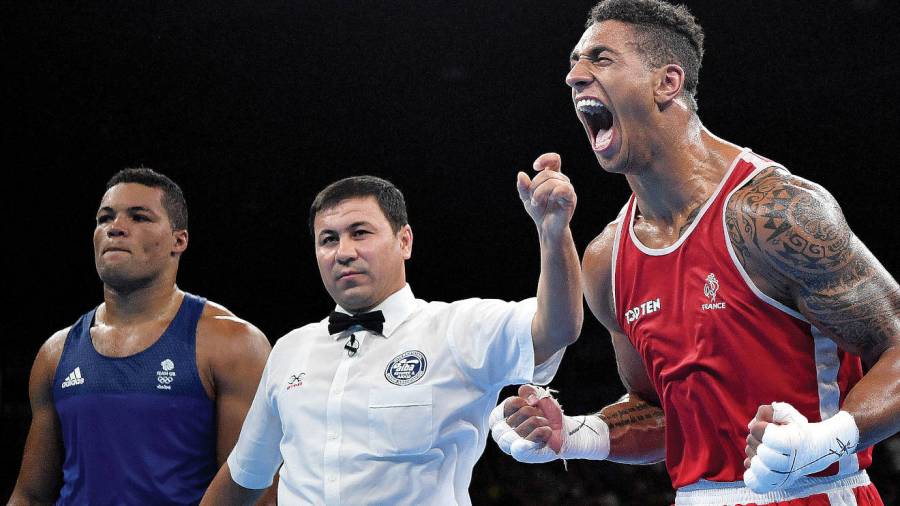 The Olympics produced Joyce, Usyk and Joshua. But boxing more than ever needs these Tokyo Games to be a success. John Dennen explains

THE first names Joe Joyce called for, after his victory over Carlos Takam on Saturday, were Anthony Joshua and Oleksandr Usyk. He knows them both well enough. He boxed Joshua as a raw amateur 10 years ago. He’s also gone five rounds with Usyk in the quasi-pro World Series of Boxing format at York Hall. Renewing hostilities with either man as a high level professional makes sense. It’s certainly what Joyce wants.

But you don’t always get what you want, when you want it. Joshua and Usyk’s own excellent heavyweight clash is set for September 25. If Usyk were to win, a rematch would almost inevitably follow in 2022. If Joshua defends his position, anticipation will once against build for him to put a fight together with great British rival Tyson Fury. Those talks had started, intensified and failed earlier this year. Perhaps they can be revived, but there’ll be no substantive progression until Fury completes his trilogy with Deontay Wilder in October.

Joyce deserves a showdown with one of the big names. He beat Daniel Dubois last year and was Boxing News’ seventh ranked heavyweight contender going into this fight with Takam. He’s also shored up his position with the WBO sanctioning body. He’ll be the mandatory for their belt, which Joshua currently holds, after Usyk. But it’ll be a long time before the WBO order that mandatory challenge and by then Joshua could even have vacated their belt. The most important thing has to be matching the two leading heavyweights, Joshua and Fury, against one another, regardless of the status of the sanctioning body belts.

That might leave Joyce on the outside looking in. But there’s no shortage of intriguing opposition as he rumbles towards the upper echelons of the heavyweight division. With his style and his propensity to take a shot on the way to unleashing a barrage of his own punches, he’ll provide compelling action whoever takes him on.

It’s worth noting that the professional success of this trio of leading heavyweights is underpinned by their Olympic experience. Anthony Joshua won the super-heavyweight gold medal on the last day of London 2012, a star-making event. Oleksandr Usyk became Olympic champion at 91kgs at the same Games. Joyce came through at the following Olympics. His Rio 2016 silver medal and his vast experience of major international tournaments have helped him move so quickly in his rise through the professional ranks. Boxing needs the Olympics, and needs to be in the Olympics, to create those stars of the future as well as for the long-term health of the sport. But that is not necessarily a given.

Joyce’s loss to Tony Yoka in the super-heavyweight final in Rio was just one of many judging controversies that marred the 2016 Olympics. The amateur sport is in such a parlous state, and governing body AIBA in such need of reform, that for these Tokyo Games the International Olympic Committee (IOC) has suspended AIBA and appointed an independent Boxing Task Force (BTF) to run this Olympic tournament. It’s an open question as to what will happen for future editions of the Games. It won’t just be considerations of what weight divisions, and how many of them, will be available at the Paris Games in 2024. Boxing’s long term future as an Olympic sport has been called into doubt.

Ominously, before the tournament got underway in Tokyo, Kit McConnell, the IOC sports director, said, “The next two weeks are about what happens here, it’s about the boxers. The wider question of the future we will look at after these Games. The role of the BTF has been to deliver the qualifiers and the event here in Tokyo. That’s the focus of the entire team for now, then it’s a separate question for the IOC with regards to the future of boxing. We have always said we will do that after Tokyo and not mix the two processes. Let’s focus on the ring and these incredible athletes and incredible young people for the next two weeks.”

The hope must be that by the end of the Tokyo Games, instead of discussing dodgy decisions and possible corruption, that the action will be the big story, that how good an Olympic boxing tournament can be and what this sport actually brings to the Games will be the focus. The boxing in Tokyo has to be a success. The whole sport needs it to be.

Matt Christie will be back next week