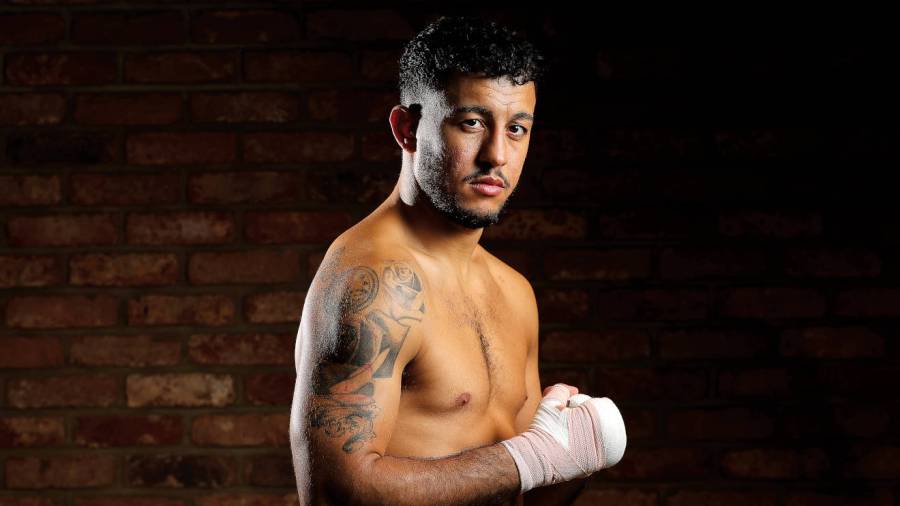 Michael McKinson was meant to be fighting Vergil Ortiz in Los Angeles tonight. He gets a short notice opponent instead. So often an underdog before in his career, McKinson's story shows he's never been out of his depth. Matt Bozeat spoke to him and his team

FOR years, Michael Ballingall and his boys went unnoticed. “I’ve handed up to David Haye and Tony Bellew,” said the 47-year-old from Portsmouth, “and Kevin Mitchell, Rendall Munroe… I’ve worked all their corners – but most of them probably wouldn’t remember me.” Ballingall worked as a house second for Frank Maloney and Hayemaker, learning the trainer’s job from the inside.

“I wanted to be a pro trainer,” he said, “and I learned the job working as a house second. You get some coaches who want to gatecrash pro boxing and go straight into it from the amateurs or white collar. I went through the system.

“As the house second, you have the best people around you. I wanted to be a trainer and a successful one, so I watched the successful trainers and learned the qualities you need.

“I was always in the background at the big fights, listening to the best trainers and fighters. Nobody noticed me, but I was taking everything in, learning how the game works.

“This was a time before social media. I wasn’t there to get my photograph taken, I was there to learn.”

Everywhere Ballingall went, his two sons went with him. “Every Friday, we would get in the car after school and go to a boxing show – if I was at school,” said Lucas Ballingall with a mischievous smirk. “I was never at school much. I was always getting suspended for fighting.”

A decade on, Lucas is still fighting – he’s won 13 of 15 – and so is his big brother, welterweight Michael “The Problem” McKinson, who’s taken the name of his Irish grandparents for his pro career.

Today (March 19) McKinson was meant to fight Vergil Ortiz Jnr in Los Angeles. “Everyone thinks he’s a future pound-for-pound star,” he said. “I’ve spent my whole career being ‘out of my depth’ – and I’ve won every fight.

“That’s the motivation, hearing people say I can’t do something.”

McKinson way is to make opponents miss and unravel them mentally. “The first time I blew kisses was in the Ryan Martin fight [April, 2017],” he said. “His team were so smug before the fight. They completely wrote me off. The crowd booed me all the way to the ring – and then I completely humiliated their boxer.

“I was in complete control and I remember blowing a kiss at his corner after I made him miss with a punch. Then I started blowing kisses at him! He was getting more and more desperate and the more desperate he got, the more he missed and the more kisses I blew at him. I was smiling at him and breaking his spirit.

“I did it against Sammy McNess as well. At the weigh-in, he got in my face and I knew that, mentally, he was struggling. I just kept my cool and then I outboxed him. Blowing kisses is my way of telling an opponent: ‘I’m winning, I’m number one, I’m going to break your heart.’

“I have always been able to make opponents miss and that’s because I started sparring professionals when I was 14 years old and I didn’t like getting hit.

“I didn’t like getting punched in the face by grown men, so I learned how to avoid their punches. I was nicknamed ‘The Problem’ long before I knew who Adrien Broner was.

McKinson’s last seven opponents had a combined record of 102-5-3 and only Chris Kongo (12-0) got close to him, a first-round knockdown the difference between the fighters on two of the judges’ scorecards when they boxed last March. “The week before the Kongo fight, everyone expected me to lose,” said McKinson, who has a five-year-old daughter, Tiarna, and a girlfriend, Lucy. “Every time I looked on social media I read I was going to lose. They thought any normal fighter would crumble under the pressure, but I’m not a normal fighter. By the time I get on the scales, mentally I feel invincible.”

McKinson remembers putting his slickness to the test in a hard Philadelphia gym a couple of years ago. “I was on my own out there,” he remembered. “It was like Rocky III where Rocky goes to Apollo Creed’s gym! They were all staring at me and they all wanted a piece of me. They wanted me to spar an amateur light-heavyweight who was on the US team. I had to either spar him or not spar anyone – and I had gone there to spar.

“It was hostile and I had to earn their respect.”

The way Ballingall sees it, The Problem has spent his entire life working towards an Ortiz fight. “I remember Mikey sitting in his high chair when we had a Prince Naseem Hamed video on,” said Ballingall, a father of seven who had a handful of amateur bouts himself. “I think his first words were: ‘Prince Naseem’ and I would take Mikey to the amateur gym where I trained when he was three, four years old.”

McKinson said: “I don’t remember anything before boxing. My first memories are of shadow boxing. My path was set out from birth. I was only ever going to be a professional boxer. Boxing is the family business.

“I travelled around with my dad, going to shows and watching Tony Oakey sparring. We would go to the York Hall about once a month. I saw Johnny Tapia box there. Boxing is all I know.”

Ballingall said: “Lucas and Mikey respect the fighters, but aren’t in awe of them.

“They’ve grown up knowing people like Ovill McKenzie and Rendall Munroe are no different to them – and that they can achieve what they achieved. I use Rendall as an inspiration. He proved you don’t have to be a decorated amateur to become a world-class pro. I saw it for myself, how far self-belief and dedication can take you. You don’t have to be a Great Britain amateur.”

McKinson missed out on national honours during a 47-bout amateur career and by the time he made his professional debut aged 20, he knew something of the boxing business – and how hard it would be to get anywhere in it. “I didn’t earn a penny for my first 10 fights,” he said, “and then I took a 50-50 fight with Ryan Martin in his home town.”

Martin was 7-0 – and McKinson knew all about him. “When we were amateurs, he was the best around my age group,” he said. “He was in the age group above me and after I boxed, I would stay to watch him. He used to win a lot of fights by knockout. I was a massive fan of his!

“I got into his head at the press conferences [before the fight]. I was telling him how I remembered all his amateur fights – and even what shorts he used to wear. I could see him thinking: ‘Wow, he’s really studied me.’ He definitely had a mental dip.

“The crowd booed me all the way to the ring and I smiled at them. I go into every fight believing I can’t be beaten.”

That confidence also carried him through a test against veteran Colin Lynes in November, 2016, a sixth-round stoppage win that sent the 39-year-old former two-weight British champion into retirement. “After that, nobody wanted to fight him,” said Ballingall. “Why risk your fighter against someone who could humiliate them?

“People acted as if we didn’t exist. They wouldn’t pick up the phone. I’ve tried every single way I could think of to get my fighters recognised.”

McKinson got a chance when paired with McNess (10-1) at the York Hall. To the disappointment of the majority of the East End crowd, McKinson dished out a boxing lesson to win unanimously. Barry Jones, the former WBO super-featherweight belt-holder, described McKinson as “a bit of a revelation”, and he built on it with six straight points wins, including the victory over Kongo (12-0) on the undercard of the Dillian Whyte-Alexander Povetkin rematch in Gibraltar.

That secured McKinson a deal with Matchroom and a points win over Poland’s Przemyslaw Runowski (19-1) set up the clash with Ortiz Jnr, cancelled this week when Ortiz became sick and replaced by a 10 rounder with Alex Martin on DAZN. McKinson said, “Nobody can say I don’t deserve this chance. I started out at the bottom of small-hall shows, took gambles and worked my way up.”