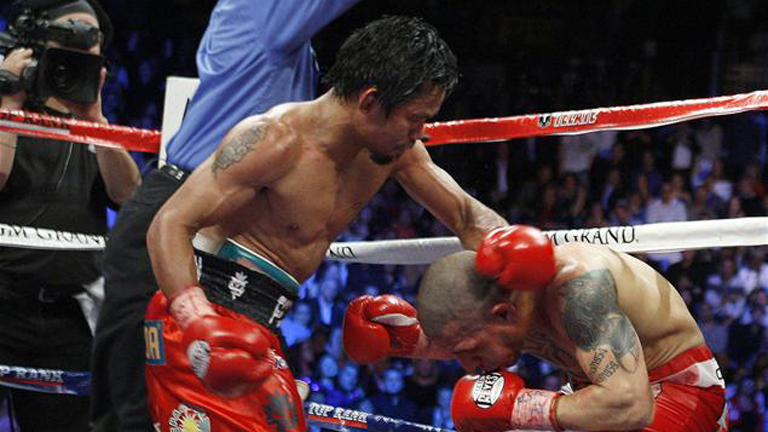 IT’S been a long time since Manny Pacquiao took a knockout victory, in fact he hasn’t won inside the distance since beating Miguel Cotto in 2009.

Manny however revealed he could be a lightweight, rather than welterweight. “Remember my minimum weight is – I can still make 135lbs. I can still make 135 and my natural weight is 140. When I move up into the higher weight divisions it changes my preparation – I eat a lot to make 147. Where I may gain a pound of two between the weigh-in and the fight, my opponent may be a lot heavier. I am not saying that I cannot do that, but what I am trying to do in every fight I try to do my best. It just so happens that my opponent is tough and bigger than me. But I am still trying to do my best to get a knockout in the fight. I am not saying what I am predicting for this fight but if the knockout comes, it will come – it is the bonus for all of your sacrifices in training,” Pacquiao said. “My opponent is bigger than me but that doesn’t matter – I am not disappointing the fans that I have and I did my best. I work hard in the fight and in training and I have proven that to the fans.”

His promoter Bob Arum added, “There is another factor. The fighters that Manny is fighting, because he is so powerful and he throws so many punches and he throws them in bunches and he hurts guys – is that they tend to fight in defense. Now any fighter or trainer will tell you that if that happens it is very difficult to knock somebody out – very difficult. I think with Jessie Vargas, who is an offensive fighter who is going to go after Manny, whose goal is to knock Manny out – I think you will see, one way or another, a knockout in this fight. And it’s a lot because Jessie will be fearless and some people say reckless, will be going after Manny to try and knock Manny out. And when that happens it is easier for the other to knock that guy out – you know that.”

His trainer Freddie Roach however is satisfied with how Manny is performing in the gym. “He has been very aggressive in his sparring – throwing combinations and he seems to be getting back to the old Manny – really quick combinations, in and out, flurries and very hard punching.  He has been hurting me while on the mitts. My shoulder is a little messed up. Buboy’s hand and shoulders are messed up. We’ll hang in there … but holding the mitts for Manny is not the most fun thing in the world to do – it’s hard, hard work. If he carries that over into the fight I think he will knock somebody out. He hasn’t knocked out any 147-pounders in awhile but again they are much bigger guys and they can take better shots, but I feel that with the combinations and the way he has been training he has been very close to knocking guys out in the gym and so forth. I am very impressed with him in the gym workouts so far,” Roach said.