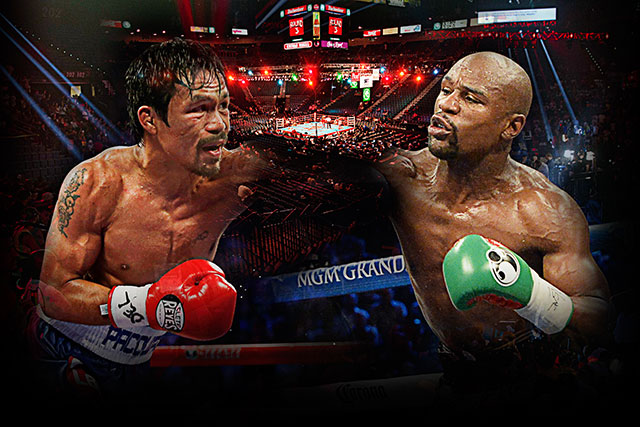 WHEN Frank Sinatra has to masquerade as an official fight night photographer just to guarantee himself a ticket, the hyperbole surrounding such an occasion is likely warranted. 44 years ago, Ol’ Blues Eyes had to do just that in his surreal capacity as the official photographer for Life magazine (he eventually provided the cover shot for that publication) when Muhammad Ali squared up with Joe Frazier in the ‘Fight of the Century’ at New York’s iconic Madison Square Garden in March 1971.

Tickets are at a similar premium for this weekend’s super fight between unbeaten Floyd ‘Money’ Mayweather Jnr and Filipino idol, and eight weight world champion, Manny ‘Pac Man’ Pacquiao. Unless you had a spare £85,000 wafting around your current account, there was little point in logging on to the extortionate secondary ticketing outlets last Friday evening when tickets for Saturday’s MGM Grand extravaganza belatedly went on sale to the public. Despite its horrendously tedious and, at times, labyrinthine-like negotiations over the past six years, the fight boxing craved more than any other is now just days away from becoming reality.

Yes the protagonists are slightly ageing versions of their great selves, Mayweather is 38 and Pacquiao is 36, but no other story matters in boxing this week as the two pound for pound kings of their generation clash in a fight which could generate close to $500 million.

For almost a decade now, whether calling himself Pretty Boy, Money or TBE (The Best Ever) Mayweather has sought the whole world as an audience.

“Nobody can ever brainwash me to make me believe that Sugar Ray Robinson or Muhammad Ali were better than me,” he now infamously said last week.

Those typically bold musings confirmed Floyd’s ego was at an all-time high ahead this career-defining encounter and the statement carried no hint of mischievousness in its tone. Simply put, in Mayweather’s eyes, he is the best boxer of all time. Period. If anything is consistent in him, it can only be the hunger for universal attention.

However, with a perfect 47-0 ledger and given the record-breaking pay-per-view numbers he consistently churns out, he is entitled to his own inflated opinion. For when the numbers are tallied up on Sunday morning, Money will only be breaking his own records.

His May 2007 clash with ‘The Golden Boy’ Oscar De La Hoya still holds the record for US pay-per-view (PPV) buys at 2.51 million, whilst his September 2013 meeting with Saul ‘Canelo’ Alvarez generated $152 million and became the first fight to surpass $20 million in gate receipts. He is a marketing phenomenon, and doesn’t he know it. Despite the $89.95 pay-per-view price tag this Saturday night ($99.95 if you’re a high definition indulger), the most expensive cable or satellite television offering ever, it is still expected to obliterate the previous high water mark in PPV buys and gate revenue, plus the record-shattering international television rights and sponsorship deals in addition to unprecendentled merchandise sales.

As well as having contrasting fighting styles, Mayweather, the defensive master who loves to potshot and move in and out of range whilst Pacquiao is a supreme volume puncher with blurringly quick speed of foot, the two combatants have wildly different personas.

Pacquiao widely distributes his wealth and still lives in the Philippines, where he is an elected politician determined to tackle the country’s extreme poverty. Mayweather unashamedly flaunts his vast wealth, with his obscenely expensive fleet of cars evenly distributed between his Florida and Nevada mansions, and now lives in his adopted hometown of Las Vegas (the western embodiment of seedy vice and excess) via Grand Rapids, Michigan. Both men started out from abject poverty and have risen to become global sporting icons through being wondrously articulate in such a dangerous language.

Mayweather has yet to taste defeat in 47 professional contests and is now within two wins of equalling Rocky Marciano’s immortal 49-0 record. The Pac Man has endured a far rockier rock en route to the boxing summit, suffering the first of five losses in just the 12th contest of a 64-fight professional career that has seen him crowned world champion in divisions spanning from flyweight to light-middleweight. His most recent reverse in December 2012 was a shuddering knockout loss to his arch rival Juan Manuel Marquez which many thought had ended all talk of a future Mayweather showdown, given the scary brutality of the finish in the dying embers of Round six. Simply put, Money may be two years older than his decorated Filipino foe, but he has far less mileage on the clock in boxing parlance.

The change seems to have borne fruit and despite shipping more blows than he’d become accustomed in his first clash with Marcos Maidana, Money convincingly staved off the Argentine’s rough-house tactics in their rematch last year, having easily accounted for boxing’s rising superstar Alvarez 12 months previous to that.

Whilst Manny may have lost some of his primitive punching power that reduced both Ricky Hatton and Cotto to a bloody pulp in 2009 (the second-round knockout blow delivered by first class Filipino post against ‘The Hitman’ was arguably one of the punches of the last decade) he was largely responsible for ending the career of controversial Mexican loose cannon Antonio Margarito in 2010 despite giving away nearly two stones in weight come fight night in his only foray into the light-middleweight kingdom.

Since this super fight was announced in late February, it’s largely been one-way traffic at the bookmakers with the Filipino being backed off the boards from 3/1 into 7/4 on the cusp of fight week according to Betway. Floyd is 1/2 to make it 48-0, which incidentally, was the same price Floyd was available for in his clash with Hatton in December 2007.

Of potential significance is the fact that Manny has succeeded as a heavy underdog before, when terminating De La Hoya’s golden career as a 9/4 outsider in 2008. In contrast, the underdog tag doesn’t sit well with Mayweather, so it’s just as well he’s never sat with it throughout his unblemished career. It is intriguing and perhaps pertinent when assessing the contest, that out of the pair’s five common foes, De La Hoya, Hatton, Shane Mosley, Marquez and Cotto, four side with Mayweather and his unbeaten streak continuing, with Cotto deeming it too close to call.

Thus, despite lacking the historical and political significance of Ali-Frazier I, just the one boxer unbeaten, as opposed to the pair in 1971, and the very valid claims that it has come too late in the fighters’ respective careers to carry optimum significance, the hitherto unseen fight purses on offer and a fervent global sporting public eagerly awaiting boxing’s most lucrative ever clash.

I, like Sinatra, could begrudgingly tolerate being a part-time photographer to get a ringside view for this extraordinary sporting occasion.

MISSING ANYTHING? NOT ANYMORE…