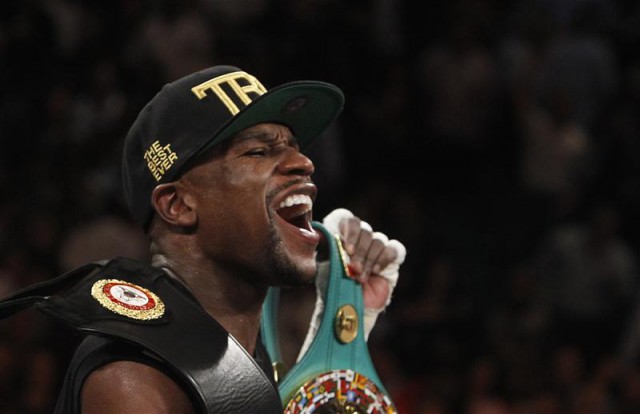 This article was originally published in the Floyd Mayweather – Boxing Icon special 164-page edition, which covers Mayweather’s life and times up to the pinnacle of his career so far, victory over Saul Alvarez, and is still available in the Boxing News Shop. Click HERE and use this coupon code: THEMONEYTEAM for a 25% discount.

FLOYD is a perfectionist. He is completely dedicated to the sport of boxing. When he trains for a fight, he trains extremely hard each and every day. He is also very engaged in the overall operations of his life, going over every detail of what is needed in the gym and with regards to The Money Team and Mayweather Promotions. This is why he’s enjoyed so much success, both inside and outside of the ring.
I first met Floyd when he moved to Las Vegas after the 1996 Atlanta Olympics. I was friends with his uncle Roger, and he introduced us. I started helping him soon thereafter with his strength and conditioning work before fights, and our relationship just evolved from there. We are business partners, friends and family. I have his back and I know for sure he has mine.
I am very proud of my role both in Floyd’s life and on his team. Trust me, it has been an incredible ride and experience and I truly appreciate that Floyd has given me this opportunity to be a part of something so special.
I’m sometimes asked if I can ever imagine the sport of boxing without Floyd Mayweather. Well we’re not at that point in time yet, so I don’t like to think that far in advance. I do believe Floyd will be a part of the sport after he is done fighting himself.
We are growing Mayweather Promotions daily and he is our Commander-in-chief.
First and foremost, I think boxing fans are drawn to Floyd because they have a complete appreciation for the way he fights. The level of his success, his style in the ring, his finesse and in most cases, domination of his competition. He is simply amazing to watch in the ring.
Floyd has always been his own person. He provides fans with an opportunity to see all aspects of his life, whether that’s his family, or his flashy lifestyle in general. I think that makes him an exciting character too.
After the career Floyd has had so far, he is rightly mentioned alongside the best fighters ever. In my opinion, I believe he’s the greatest of all-time. Absolutely, 100 per cent.

Let us know what you think. Post in the comments section below this article.