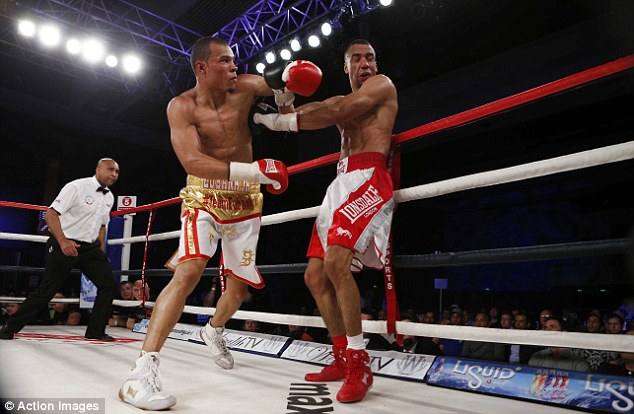 A 24-YEAR-OLD boxer, with an unbeaten record of 16-0 would generally be considered a top prospect with a promising future. Chris Eubank Jnr however, is often dismissed as being an annoying and arrogant Chris Eubank Snr-wannabe. His strange ring act, his quirky persona, and the fact that he hasn’t taken on any credible opponents to date, lead many to believe he is overrated.

Many of Britain’s favourite world champions, Ricky Hatton, Joe Calzaghe and Naseem Hamed to name but a few, began their careers beating opponents with losing records, but used these early fights to nurture their skills (in actual fights and in the daily, repetitive, environment of the gym) and use them as a kind of work-experience, to learn their craft, and get that experience in the bank – which would benefit them later on in their careers.

Chris Eubank Jnr appears to be doing just that. But comparing him to his father, Eubank Snr (who also began his career boxing nobodies) when he was a world champion, as opposed to his early career, is a flawed comparison.

Getting a last-minute call-up to box Eubank Jnr, I happily took the fight because I too thought he was overrated. I wanted to burst his bubble, and plant the arrogant Brighton man’s feet firmly back on the ground – or his face on the ring canvas – in front of one of my favourite British boxers off all-time, Chris Eubank Snr.

Our contest, in June 2013, was scheduled for eight rounds. Despite being unaware of the numbers written on the potentially biased judges’ scorecards, theoretically speaking, I won the first five rounds, with the next two rounds going to Eubank. Therefore, in an ideal world, due to being ahead, five rounds to two, all I had to do was get through the final round and Eubank’s bubble would have been burst for the first time.

But then what happened in the final round made me realise Eubank might actually be underrated, and not overrated. He dug deep to force the stoppage, showing grit, determination, hunger, mental toughness and the will to win. All of which cannot be gained from training in a gymnasium. No amount of skipping, running or even sparring in 16oz gloves with a head-guard will show a fighter’s true desire, once you’re getting hit with 8oz gloves against an opponent, in a real fight, whose objective is to win, by any means.

Eubank Jnr’s critics however, may say: ‘So what if he dug deep, and turned the fight around against a nobody?’ But the opponent he boxed that night isn’t important, what is important is the mental toughness Eubank exhibited. Instead of thinking to himself during the fight ‘forget it, if I’m being outboxed by a nobody, what chance will I have against a somebody?’ But he had other ideas.

Despite Eubank Jnr beating a boxer who most would probably say isn’t credible, the same people would probably say the same about Carson Jones, prior to his first contest with Kell Brook. The Sheffield man dominated the first two-thirds of the contest, before facial damage, fatigue and a hungry, strong-willed boxer decided to go for a stoppage victory. If there were one or two more rounds remaining, Jones may have got that stoppage victory.

Many of the boxing fraternity claim that when Brook steps into the ring in California, on August 16 against world champion Shawn Porter, he will be out of his depth, claiming Porter will be too powerful and aggressive for the man who has faced relatively unknown opponents throughout his career. The last two rounds against Carson Jones in their first contest, however, showed the mental strength of Kell Brook, a mental strength that may potentially outdo physical strength, that same mental strength that Chris Eubank Jnr showed glimpses of in our first contest.

And as they say, boxing is 90 per cent mental and 10 per cent physical.