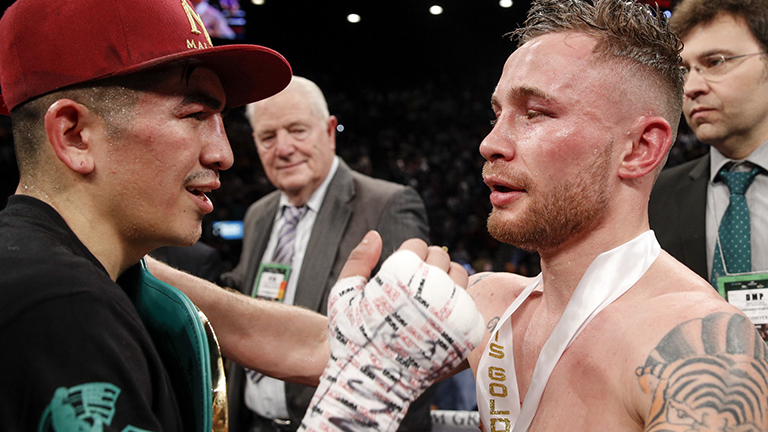 LEO SANTA CRUZ has been ordered to defend his WBA featherweight title against Abner Mares, scuppering the chance of an immediate trilogy fight with Carl Frampton.

Santa Cruz outpointed Frampton in January, having been handed his first professional loss by the Ulsterman last year.

With the score 1-1 between them, both men expressed interest in a third fight though it now seems that will not be coming next.

Yesterday the WBA announced it has ordered Santa Cruz to fight Mares, who he defeated in a 2015 thriller, and they have been given 30 days to reach an agreement or else purse bids will be called.

The fight should be relatively easy to make, given that both are open to it and they are both advised by Al Haymon and box under his Premier Boxing Champions banner.

Mares has fought once since losing to Santa Cruz, when he upset Jesus Cuellar in December to lift the WBA’s ‘regular’ title, thus putting him first in line to fight the Frampton-Santa Cruz II winner.

Mares was ringside in Las Vegas for that January rematch and immediately after spoke to Boxing News about his desire to resume hostilities with Santa Cruz.

“He [Leo] did just enough changes to win this fight, and I was surprised. Before, he said ‘I’m going to box this guy, I’m going to use my range and box him on the back foot.’ I thought he was playing, I thought he was just trying to get into his [Frampton’s] head, but he did it. Frampton did not catch that,” he said.

“I am looking for a rematch with Leo. I am going to be throwing skittles at Leo’s face until he notices I’m here. With the WBA situation, the fight should be made quite easily. Let’s get it done.”

Frampton, who had not lost as a pro prior to his rematch with Santa Cruz, intends to stage his next fight in Belfast, somewhere Leo said he would not be willing to travel. However, ‘The Jackal’ could land a fight with Wales’ IBF champion Lee Selby.

Selby and his team are currently working with the IBF to find a resolution to his mandatory challenger situation, but they hope the path is cleared for a huge fight with Frampton in the summer.

Frampton is also ranked highly with the WBC, whose featherweight title is currently held by Gary Russell Jnr.