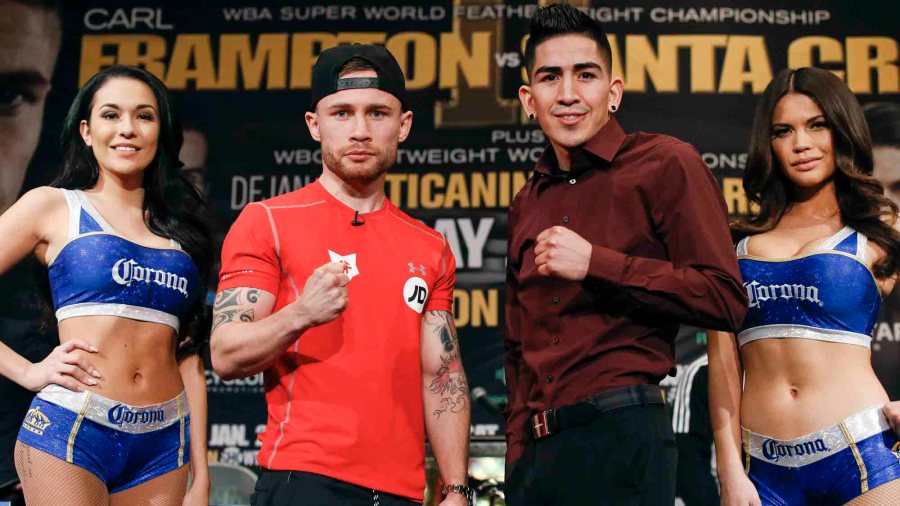 STEPHEN ESPINOZA believes Carl Frampton could create as much of a stir in the US as Ricky Hatton did back in his fighting days.

The Showtime Sports exec is excited to once again have the Northern Irishman boxing on the channel this weekend against Leo Santa Cruz.

Frampton is already proving a hit Stateside but if he continues to perform in exciting, high-profile fights, Espinoza believes he will follow in Hatton’s footsteps.

“I think the sky’s the limit for him. He’s clearly the best Irish fighter, probably ever, and there really hasn’t been someone who’s come to the US from the UK or Ireland since Ricky Hatton who has the potential of Carl Frampton,” he told Boxing News.

“Carl and Ricky are both funny, likeable down to earth guys and are both action-oriented in the ring. Candidly I think Carl is a more skilful fighter and will have a longer career, but I think there’s a real chance the US market embraces him the way they embraced Ricky Hatton.”

Showtime’s current schedule is a huge treat for fans, with James DeGale-Badou Jack more than delivering two weeks ago and Frampton-Santa Cruz and Keith Thurman-Danny Garcia still to come.

The channel is including UK fighters in some of its biggest fights and also has IBF heavyweight champion Anthony Joshua tied into a multi-fight contract.

“You have to go where the talent is and the UK market is really hot,” Espinoza said.

“Between Carl and James DeGale and a host of young guys. We’d be missing a huge opportunity if we weren’t fishing in that market. Whether it’s Anthony Joshua or Carl or DeGale or a younger kid like Josh Taylor or even someone like Katie Taylor, we have our fingers on the pulse out there because it’s a great talent pool right now.”

While British boxing is thriving, the American market took a hit after Mayweather-Pacquiao failed to deliver. There are already several pay-per-view fights confirmed for the early stages of 2017, some – like Miguel Cotto’s fight with James Kirkland on HBO – have been criticised.

Showtime are broadcasting several standout fights on a non-PPV platform, including the Jorge Linares-Anthony Crolla rematch from the UK.

“I think [cards like Frampton-Santa Cruz] are critical because it’s a competitive television market and a competitive sports market. It is important for boxing to be putting its best foot forward as often as possible,” Espinoza continued.

“Everyone is quick to point out our missteps when Mayweather-Pacquiao takes long to make, there are a lot of reasons, it was a complicated fight but people get frustrated.

“But when we can have a great fight and we can have an immediate rematch within six months, that’s fantastic. When we can have guys like Mikey Garcia and Dejan [Zlaticanin] who want to fight the best without any games or ducking, it’s great for the sport and we should do it as much as possible.”

Espinoza feels that elite-level fights create a self-perpetuating cycle, where other fighters are lured into pursuing bigger challenges.

“When fighters are taking tough fights and not delaying or hesitating, then it leads to other great fights. It sets the tone.”

However there is also a set plan at Showtime, and it’s one with a view to creating more clarity in the sport for the fans who tune in and attend live shows.

With Selby boxing on the Frampton-Santa Cruz undercard, it provides context for fans given that the Welshman is set to fight the winner, should he prevail in his own fight.

Similarly, Showtime will also show Zlaticanin-Garcia and Linares-Crolla, another situation where the winners of each fight will meet later in the year.

Espinoza said: “The other thing we’re trying to do at Showtime is focus on divisions. The featherweight division is something we’ve been working on for about 18 months and last year it started to pay off, we had six world title fights in the featherweight division, of course with the marquee fight being Frampton-Santa Cruz. It gives fans a sense of context. Boxing’s a fragmented sport so when we can say, ‘hey, the guy on [Showtime] Extreme, Lee Selby, he could be a future opponent for the guys in the main event,’ or when we have Mikey and Dejan, we know we also picked up the rights to Crolla-Linares, we can provide some context and the sport begins to feel more organised to the fans.”