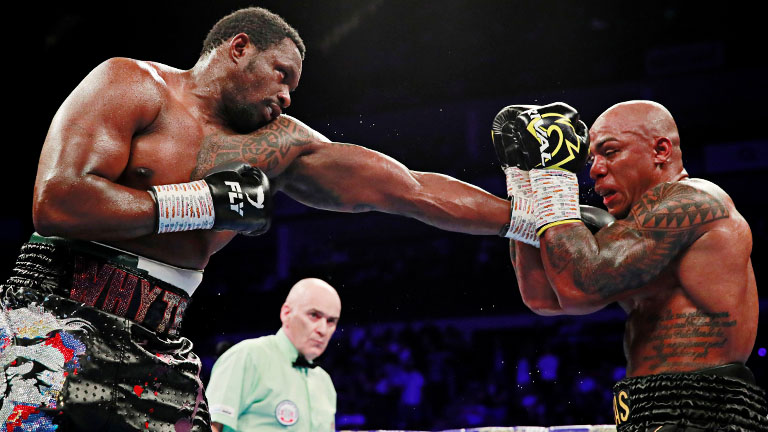 Dillian Whyte impresses in a 12-round victory over Oscar Rivas but still has to wait a while to land his WBC heavyweight title shot, writes Ron Lewis

WHEN Dillian Whyte looks back on his career, it will be interesting to see what prominence he gives to the night he beat Oscar Rivas at the O2 Arena, London. It was the night he was finally handed a WBC belt featuring the words ‘World Champion’, but in reality it was just one more step on his gruelling journey through the sport.

Whyte had to get up from a ninth-round knockdown before claiming a unanimous points victory over Rivas, a Colombian who now calls Montreal home. It was Whyte’s 10th successive win since he lost to Anthony Joshua for the British heavyweight title in 2015. It earned him the interim WBC title, a reward as much for occupying top spot in the WBC rankings for more than 600 days as anything specific.

What Whyte really wants is a shot at the real WBC title, currently the property of Deontay Wilder. Eddie Hearn, the promoter, said the WBC had promised Whyte, the 31-year-olf from Brixton, a shot by the end of next May. He might have to wait a bit longer than that.

As the promoter of Joshua, Hearn has found himself in a delicate position with Whyte. They have stuck together without a long-term promotional deal largely through expediency. While Joshua’s defeat to Andy Ruiz Jr last month dented the earning power of a Joshua-Whyte fight, it strengthened Whyte’s position. Last year Hearn seemed to hold all the cards in the heavyweight division. Now neither could afford to see Whyte beaten like his most famous rival.

Rivas was a serious test. The 32-year-old, signed to the promotional giant Top Rank, was notably lighter than Whyte, but had the edge on speed. He came with ambition too. Rivas wanted what Whyte had come to assume as his right.

Rivas started well, but it was Whyte who had the first big success, stunning Rivas with a big right and following it up with a string of heavy shots. Rivas rode out the storm but Whyte didn’t get greedy, establishing control behind a thudding jab.

By the sixth round, Rivas’s face was starting to swell up and he was becoming subdued. He got through with one big right and also forced Whyte back onto the ropes in the seventh round, but Whyte turned the attack around well, catching Rivas coming in with an uppercut.

The momentum switched dramatically in a thrilling ninth round, when Whyte was dropped heavily with a right uppercut and a left hook. Whyte rose on unsteady legs and for a moment looked there for the taking. Whyte survived, though, while Rivas seemed to punch himself out.

Whyte re-established control, rocking Rivas in the 10th round, before boxing well in the last two sessions to claim a clear win.

Guido Cavalleri and Mark Lyson both scored it 115-112 to Whyte, while Craig Metcalfe made it 116-111. Victor Loughlin was the referee.

So when will Whyte get his shot? Wilder is next due to defend his title against Luis Ortiz, of Cuba, a bout that the latest murmurs from America suggest will not take place until late November. That would make February 22, which has been claimed to be the target date for a rematch between Wilder and Tyson Fury, seem unlikely.

All of which pushed Whyte’s position back even farther, even before you factor in suggestions for rumours that his deal with the champion is for two fights. One more fight for Whyte? Two? No wonder he seemed underwhelmed.

The best news of the night came in the form of a post on Twitter by Darren Barker, trainer of Dave Allen, reporting the heavyweight in good health in hospital after he left the ring on a stretcher after his fight with David Price.

The 10 rounds of action that had preceded the rather worrying conclusion had made a complete mockery of the bookmakers’ decision to make Allen a strong favourite in his scheduled 12-rounder with Price.

Price won an Olympic bronze medal, had held the British and Commonwealth titles. He had advantages over Allen in size, power, experience and pedigree. Class is permanent, as the quote most regularly attributed to Bill Shankly, famed manager of Price’s favourite football team, reminds us.

If Allen did have a plan to beat Price, he lacked the tools to put it into action. Price won the fight at distance, he won the fight up close, using his jab well and landing a series of hard shots almost at will.

Allen, from Doncaster, greeted many of Price’s best punches with a slight shrug. He could find no other response. Marcus McDonnell, the referee, accepted Allen’s retirement after the 10th round.

It has become popular to knock Price in recent times. But while the 36-year-old from Liverpool punches as hard as any heavyweight and has an excellent jab, four of his six defeats were against boxers who were guilty of a doping offence. Tyson Fury, after all, once vacated the British and Commonwealth titles rather than go through with a purse bid to face Price.

Dereck Chisora continues to enjoy a remarkable Indian summer to his career as he wiped out Artur Szpilka in the second round. It was a brutal finish as referee Mark Lyson’s tardy intervention left the Pole a sitting target for a ruthless Chisora.

Few heavyweights can have been written off as much as Chisora, who seven years ago this month did not have a licence or seemingly much of a future in the sport when he was comprehensively beaten by David Haye. Whyte knocked him cold at the end of their arduous rematch in the same ring in December, but this was already his second win since then. At 35, he is becoming an enduring fixture of the heavyweight scene.

Szpilka, 30, had gone nine rounds with Wilder for the WBC title in 2016, but Chisora was in no mood for him to hang around. Early in the second round, Chisora landed a crushing right that saw Szpilka slump back into the ropes. He went on to land five more punches, including three crushing blows to the head, before he slumped motionless to the floor.

Only after the final punch landed did Lyson attempt to stop the fight, by which time his action was irrelevant. Medical personnel flooded into the ring and, fortunately, Szpilka was soon back on his feet. The official time was 1-01.

Lawrence Okolie, the British and Commonwealth cruiserweight champion, could be in line for a shot at the European title after taking time to break downMariano Angel Gudino before stopping the Argentinian with one second remaining in the seventh round of a scheduled 10.

Gudino was very negative, backing away from the opening bell and Hackney’s Okolie, in his first fight since Shane McGuigan took over as his trainer, took time to gain the upper hand. The Argentinian was down several times, which were ruled slips, before Okolie finally caught up with him in the seventh, knocking him down three times before Bob Williams waved it off.

McGuigan has plenty to work on with Okolie. While the 26-year-old boxed at the Rio Olympics, he did not have many amateur bouts and was recording his 13th straight win as a professional. Against Gudino, he struggled to cut down the ring and was too right-hand happy, often telegraphing his shots, which gave the Argentine opponent an easy escape route.

A seventh-round knockdown proved the deciding factor that meant Richard Riakporhe kept his unbeaten record at the expense of Chris Billam-Smith’s in their cruiserweight 10-rounder.

It gave Riakporhe the extra point that gave him a 95-94 on Leszek Jankowiak’s decisive card. Terry O’Connor made Billam-Smith a 96-93 winner, while Salvador Salva sided with Riakporhe by a generous 97-92. Bob Williams refereed.

It was a case of Billam-Smith’s workrate against Riakporhe’s power. Billam-Smith was the busier and started better. By the fifth round, there were signs that Riakporhe was starting to come apart, after he was caught by a heavy right hand.

Riakporhe, from Walworth, stuck with it, though, and by the seventh it was Billam-Smith in trouble. A clubbing right had him backing off, then a left hook and flurry of punches sent him sprawling over the top rope.

By the ninth, Bournemouth’s Billam-Smith looked tired and in survival mode, although he produced an excellent last effort to win the last round.

Dan Azeez claimed the vacant Southern Area light-heavyweight title in only his ninth professional bout as he forced Charlie Duffield’s corner to pull their man out after six largely one-sided rounds. Duffield was badly hampered by a large swelling below his left eye, which started becoming a problem in the opening minute and reduced his ability to see Azeez’s right hand coming.

The accumulation of blows took its toll, as a clubbing right had Duffield sagging in the sixth round. Another big right rocked him, prompting Mark Tibbs, Duffield’s trainer, to throw in the towel, although before referee Marcus McDonnell could act, Azeez landed three more shots to send the Canning Town man tumbling to the floor at two minutes 49 seconds of the round.

Alen Babic, from Zagreb, took just eight seconds to knock down Morgan Dessauxwith a sharp left hook in a swiftly-settled show opener. The Croatian heavyweight, who won his professional debut in two rounds in Rome nine days previously, decked the Frenchman soon after, which led to Dessaux taking Bob Williams’s full count on one knee at 56 seconds of the first round.

In another heavyweight encounter, scheduled for eight rounds, Ipswich’s Fabio Wardley recorded his eighth successive win as he stopped Mariano Diaz Strunz, of Argentina, 66 seconds into the sixth round.

Wardley, 24, seemed satisfied slowly breaking Strunz down, until Diaz Strunz found some ambition in the fourth round and landed two meaty hooks.

That show of defiance seemed to inspire Wardley, who landed a series of big rights in the fifth, which Diaz Strunz did well to withstand, although a flurry of punches did send him to the floor late in the round.

Early in the sixth, Wardley trapped the Argentinian in his own corner and unloaded until Bob Williams intervened.

Dalton Smith, the former highly-ranked amateur, record the second win of his professional career as he forced Ibrar Riyaz’s retirement at the end of the second round of a scheduled super-lightweight four-rounder. It was one-way traffic while it lasted, Smith, from Sheffield, opening up with some flashy combinations, which Reading’s Riyaz was forced to absorb. Marcus McDonnell refereed.

THE VERDICT: Whyte is in danger of wearing himself out before he gets to that deserved world title crack.