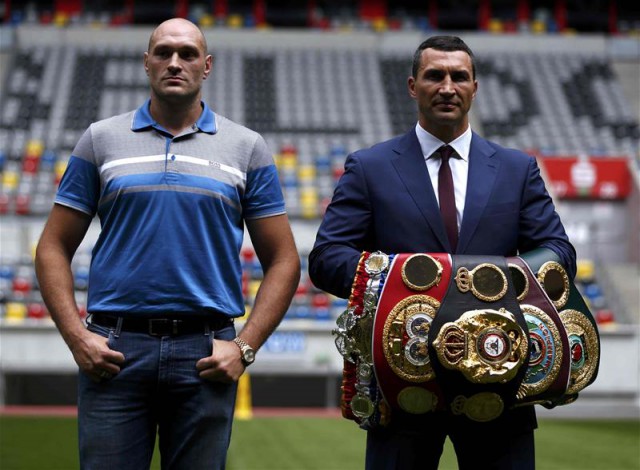 TYSON FURY made quite a splash at last week’s press conference in Germany to officially announce his October challenge of heavyweight king Wladimir Klitschko, and the unbeaten Fury is full of self belief. But can the vocal challenger pull off the win?

Here, ten names from the world of boxing tell us what they think will happen in Dusseldorf:

“I got for Klitschko by late stoppage, around the 11th round. Fury has no chin, he was dropped by Steve Cunningham, who is only a cruiserweight. Also, Fury has been largely inactive recently. Fury has not fought quality world class fighters. Fury’s size is what keeps him in the fight as long as the 11th. I think he should take the whipping, take the experience and the money, and move on.”

“To me there is no way Fury will win. Today’s fighters, they don’t think about winning or believe they can win. Their managers just try to set up their fighters to get a chance to fight for the title and make some money. Because these fighters have no skill or heart or desire to fight, they only try to make money. Also, today’s trainers are people who didn’t fight themselves or if they did were not any good – so they cannot teach. I cannot teach a person how to do subtraction if I cannot do addition!”

“I definitely give him [Fury] a shot. I wouldn’t write him off, not with his size. With his size he won’t have to work chasing  Wladimir down. From the outside he can maybe hold his own and match Wladimir’s jab. I heard he is maybe going to fight Wladimir from a southpaw stance, and with his stronger hand being the jab, maybe he can overcome Wladimir’s jab.”

“I give him [Fury] a shot – you can’t teach size! I just hope they get a good referee who won’t allow all the holding [from Klitschko]. I think that could be an awesome fight. Fury’s a ballsy fighter and I’m sure he wants to get down and fight. The problem is, whenever he [Klitschko] fights in Germany, he gets away with all the holding and it becomes boring to watch.”

“I like Klitschko. I’m not sure if it will be a KO or points, but my pick is Klitschko to win.”

“A pure and simple win for Klitschko, due to his great experience. Do I see a Klitschko KO? I hope so, I can’t stand Fury and I don’t want to hear him sing any more either!”

“I go for Klitschko to win by early KO. He is well past his best but he still has too much power for Fury. But I hope I’m wrong, I love watching Fury, he is great entertainment.”

“Come on, man; Klitschko’s just giving Fury a payday! He’s [Fury] just big, a brute. But once Klitschko chops that tree down, that’s it. He don’t have no skills, I don’t think, and he don’t have no punch. As soon as Klitschko hits that chin, it’s a wrap.”

“I think Fury’s size will get to Klitschko. Even though Klitschko is very strong, the game changes when you face a fighter who is bigger than yourself. Let’s see how he [Klitschko] can adjust to being the smaller, shorter man in the ring.”

“Giants do fall! First off, I don’t like Fury as I think he’s arrogant as hell. Nor am I a fond Klitschko fan. But in my opinion Klitschko is more skilled and he has faced better opposition. My pick is Klitschko by 8th-round TKO.

CLICK HERE FOR A VIDEO INTERVIEW WITH TYSON FURY