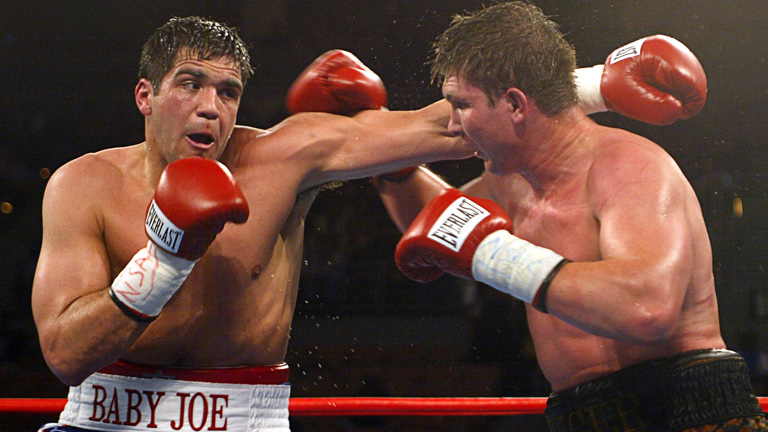 WHO misses “Baby” Joe Mesi? I do, so God only knows how the people of Buffalo feel. In a time when heavyweight boxing was far friendlier on the eye, no one was more jovial than Mesi. A proud product of Buffalo in North-Western New York, Mesi excelled in a variety of sports before finding a boxing gym in his late teens in what was an initial attempt to lose weight. Impressed by the physique and conditioning his latest pastime had bestowed on him, Mesi made the realisation that he was a useful fighter and he soon embarked on a mission to bring boxing back to Buffalo.

“Let me make this point, I didn’t need boxing in my life,” insists Mesi. “I’m college educated so boxing wasn’t my first priority when I was finding my way but it was something I was good at and I definitely felt I could become a champion and bring good nights to Buffalo on a regular basis. This city is so important to me. I love it here and it’s the best place on Earth and I’ll never ever leave Buffalo so to have the chance to become a champion and to do it front of my community, it meant so much to me and it was a challenge that was so rewarding.”

Despite his belated beginning in boxing, Mesi soon picked it up and began collecting amateur titles on a frequent basis. His transition to the professional game occurred in 1997 and with Mesi regularly delivering explosive performances, it was boxing logic that American audiences would get animated. Possessing supporters and critics throughout his meteoric rise, Mesi made believers of doubters in September 2003 when HBO’s “Night of the Heavyweights” hit a sold out HSBC Arena in Mesi’s backyard. Pitched against former USA amateur teammate, DaVarryl Williamson, Mesi took seconds to dispose of his opponent and announced himself on the radar of the era’s leading competitors.

“That was some fight because DaVarryl was a highly skilled fighter who knew me as well as anyone. We’d sparred plenty of rounds together and spent so much time with each other when we were growing up and it was an absolute pleasure to share the ring with him in front of my people. The result was one that came as a great surprise to most people because DaVarryl was a brilliant amateur and he had made a good start to his professional career so to end the fight with one punch in the first round was really something special.”

A Madison Square Garden outing against the durable Monte Barrett provided more action as both fighters endured knockdown before Mesi was given the verdict and then it was onto the Mandalay Bay in Las Vegas in 2004 for the most memorable moment of Mesi’s career. Opposing seasoned Kazakh, Vassily Jirov, on the Shane Mosley/Ronald Wright undercard, Mesi dominated the first eight sessions with relative ease before suffering a series of knockdowns in the final two rounds. A rapturous crowd displayed their gratitude towards both fighters at the contest’s end and Mesi was declared the victor by the ringside judges. The real drama would occur in the months after the fight though as Mesi was medically suspended following injuries suffered in the Jirov fight.

“They were tough times but I refused to give up throughout,” reflects Mesi. “The Jirov fight was a wonderful result because he was an exceptional fighter with a fine pedigree who’d competed at the highest level both as an amateur and a professional. I went all out to prove I was fit to fight and I was granted a licence but not by New York or Nevada. Those two places are where every boxer needs to be to be a success in this country and if I couldn’t box there then it was going to be hard to fulfil my championship ambitions.”

Instead, Mesi took his brand of excitement to a variety of boxing outbacks such as Rhode Island, Arkansas, and West Virginia. His undefeated record remained intact as Mesi blitzed his way through a cast of journeymen but the dreams of glory he desperately clung to remained out of his reach and he decided to bow out of the sport.

“There were times I was so bitter about boxing because it didn’t give me the opportunity I think I deserved. I brought so many good nights to the people of Buffalo but there was so much more I could’ve done. Me and Mike Tyson held talks about putting on a fight in the Ralph Wilson stadium which is home to the Buffalo Bills and whenever I see Mike these days he still reminds me of it and says we could’ve made so much money. I can’t stay angry at boxing and I still take an interest in it today but I just wish I could’ve gone out as heavyweight champion.”

Today, Baby Joe is a successful sales manager for St Jude Medical. He speaks passionately about his job and his manner during our conversation suggests that Mesi has never been happier. He beams with pride when speaking about his wife, Michelle, and three children, stepdaughter, Hope, Juliet and Joe, key elements of a boxing story that for once has a happy ending.

“My family life was put off when I was boxing because I was always away fighting or in camp so it wasn’t always possible to be there for them. I’m with them all the time now and I’m doing a job that I love so much and I’m really good at it too. My boxing career was a part of my life I’m so proud of as I brought boxing to so many people. I brought big time boxing on HBO to Buffalo and they even called me “Buffalo’s Third Franchise” behind the other sports teams so for someone who loves where he’s from, that was very much a big deal for me.”