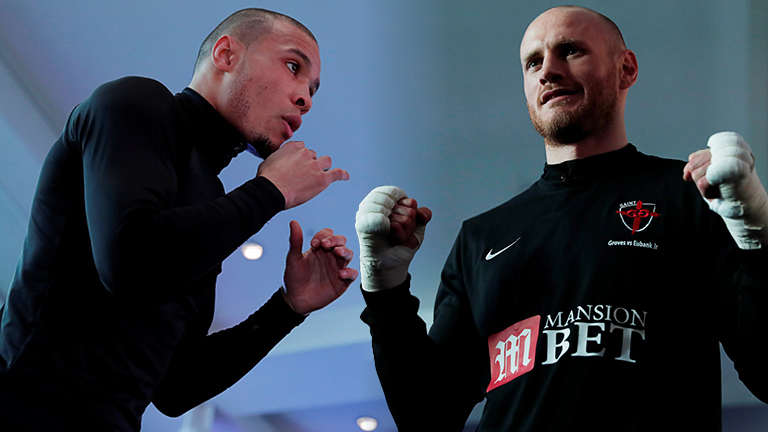 CHRIS EUBANK JR is the favourite to beat George Groves, with bet365 placing the challenger to the WBA super-middleweight title at 8/15, with the champion currently priced at 6/4.

Odds are as long as 40-1 on Groves winning in round one or two, while Eubank is at 33 and 28/1 respectively. Furthermore, the odds are significantly shorter for the challenger to win inside schedule at any point.

Are the odds correct? Generally, the bookies are about right, but deeper investigation – particularly when there is money to be made – is worthwhile here.

Why is Eubank Jr favourite? It’s likely more money is being placed on him for a start but, importantly, his reputation has soared in recent years while Groves – since the unforgettable one-punch loss to Carl Froch in 2014 [below] – has seen his stock drop, if only by a little bit.

It’s true that he’s won a world title since then, but he’s struggled to grab the mainstream headlines with a series of mostly solid, but occasionally rickety, showings. Meanwhile, Eubank Jr has been portrayed as something of an unstoppable machine which, truth be told, is probably not the truth.

Without question, he has looked impressive, particularly against Arthur Abraham and, most recently, Avni Yildirim [below]. And of course, the name ‘Eubank’ will always generate more attention than ‘Groves’ – at least in the mainstream consciousness, and perhaps from the bookmakers who spend significantly more time dissecting the football and racing form than they do contests like this.

What shouldn’t be forgotten among all the Eubank cheerleading is that Abraham, well past his best, nor Yildirim, wildly unproven, would probably not have posed any threat to Groves either.

So, Groves, even taking into account his three career defeats, should be the favourite. He’s the heavier-handed, has the superior jab, conventionally speaking he’s the more skilled and, importantly, has proven himself at world level in ways that Eubank is yet to.

Throw in the perceived lack of organisation in the Eubank ranks and it’s easy to see why hardcore boxing fans are betting on Groves.

Of course, this isn’t a bout of the ‘no-brainer’ variety like, say, Floyd Mayweather vs Conor McGregor, which was a bout that made a lot of boxing fans significantly richer as a consequence of betting big on Floyd to stop Conor. Groves-Eubank Jr is almost perfectly poised and the result could be in the balance for much of the contest.

The real value, unless you’re willing to lay some huge sums of cash down, would appear to be in the mode of victory.

Backing Groves in each of the 12 rounds at just £1-a-round would see a handsome return on your £12 outlay should he win inside schedule. Furthemore, despite the perception that Groves is somewhat delicate, it is he who is more likely to win in the first half than Eubank, despite the odds saying otherwise.

Eubank, of course, is being backed for good reason, but seems unlikely to blow Groves away early. The educated predictions on Eubank tend to be a late stoppage (between rounds 8 and 12), or his relentless aggression to tip the tables on the cards. Either result is perfectly feasible.

Without doubt, despite the short odds on the outright winner, there is value to be found for boxing fans who know their stuff.