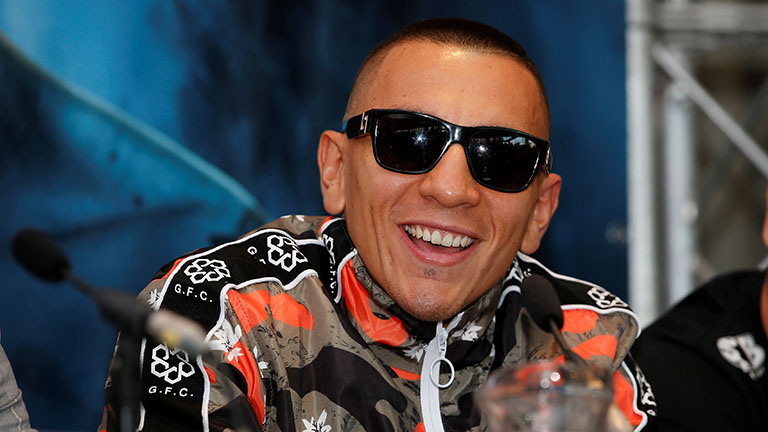 Who is Samuel Vargas? David Wainwright unearths a reason to wonder whether Amir Khan's next opponent will indeed be any better than Phil Lo Greco

‘WHO is Samuel Vargas?’ is the question on the lips of Amir Khan fans this afternoon, following the announcement he’s “King” Khan’s next opponent on the comeback trail. Fans who went home happy with Khan’s 39 second destruction of Phil Lo Greco last time out in Liverpool, may not be quite so forgiving this time if Khan-Vargas is similarly brief at the Arena Birmingham on September 8.

Looking at Boxrec we know that the Canada-based Columbian is ranked first out of 22 in his own country and has a world ranking of 46. Khan and Matchroom will claim that he’s a better class of opponent than Lo Greco whose world ranking of 110 would back this up.

Vargas comes into this fight with a decent record of 29-3-2 (14) with a majority draw battle over 10 rounds with Argentinian Mauro Maximiliano Godoy (30-3-1) last time out for the WBA-NABA welterweight title, which itself would indicate that he is a worthy opponent for the Bolton man. It’s only when you scrutinise his three defeats, we begin to have concerns about his ability to give the fans the kind of fight they want. He last lost to common foe Danny Garcia in November 2016 where he fought back bravely after going down in the first round until the referee waved off the mismatch in the seventh.

Prior to that his other defeats were a fourth-round stoppage by a 15-0 Errol Spencer Jnr in April 2015 and before that his first loss was on points over 10 rounds against Mexican Pablo Munguia (17-4) in December 2013. Here lies the problem, Munguia and Vargas share a common foe as well: Phil Lo Greco who stopped the Mexican in five rounds nearly two years later. It’s understood that this is merely another tune-up, but Khan needs more than a quick demolition job and the punters deserve more than a potentially three minute or less main event.

Local Birmingham welterweight Frankie Gavin took to Twitter earlier today to voice his displeasure at the news: “Just read Khan’s fighting Samuel Vargas next, **** fight really, especially when he’s fighting in Brum. Surely would have made sense to fight me or Sam Eggington. I know we both would have took the fight…” With Eggington ranked highly at super-welterweight and fighting on the Khan undercard, plus Gavin scheduled is to fight European champion Kerman Lejarraga on November 17, he may have a point.