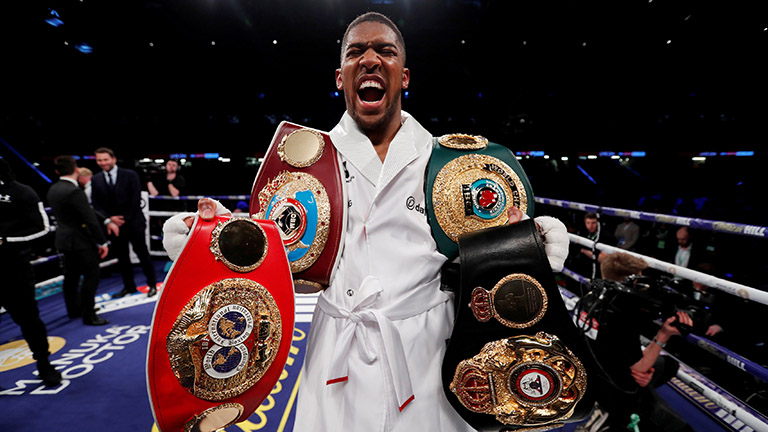 DILLIAN WHYTE’S career-best victory over Joseph Parker on Saturday in London proved beyond doubt that Britain has a further contender capable of threatening the reigning world heavyweight champions.

Anthony Joshua and Deontay Wilder remain the division’s leading figures, but where Tyson Fury was once considered the only rival with the ability to overcome them, promising alternatives have since emerged.

Anthony Joshua
The IBF, WBA and WBO champion, 28, next fights Russia’s Alexander Povetkin at Wembley Stadium on September 22. Promoters Matchroom have the same venue booked on April 13 in anticipation of his next fight, which it is little secret he hopes will come against Wilder, for all four titles. If terms with Wilder cannot be agreed, his bitter rival Whyte’s victory over Parker makes him his likeliest challenger in a rematch that has significant appeal.

Deontay Wilder
When the time comes for America’s WBC champion to fight Joshua to become the first heavyweight ever to hold all four world titles, it will likely be the division’s biggest occasion since Lennox Lewis defeated Mike Tyson in 2002. Even if that time was to come in April, the undefeated 32-year-old will need an opponent in the interim; mandatory challenger Dominic Breazeale seemed the likeliest but Fury insists they have begun negotiations for a fight in December.

Dillian Whyte
Whyte defeating Joshua in the amateurs and then hurting him when losing his only fight as a professional in December 2015 has made a rematch almost inevitable. His victory over Parker means that fight could be next for Joshua. The 30-year-old has spoken of his desire to have a further bout before then but is improving to the extent that the combination of his growing abilities allied with his remarkable chin makes that no longer seem the risk his fight with Parker once did.

Oleksandr Usyk
The gifted Ukrainian, 31, this month became the first cruiserweight to hold all four world titles when he outclassed Russia’s Murat Gassiev in the final of the World Boxing Super Series. Despite having a significant size disadvantage, his talents are such that he is already considered a future world heavyweight title challenger and could prove the biggest threat to the reigning champions. Joshua’s promoter Eddie Hearn has already discussed a fight with him, suggesting it is a case of when and not if they will fight; he would have a greater chance of success if he makes a slower transition into the heavyweight division.

Tyson Fury
Former IBF, WBA and WBO champion Fury fights for the second time since beginning his comeback, against Francesco Pianeta, at Belfast’s Windsor Park on August 18. The following morning it will be clearer whether he truly retains the abilities that inspired his shock points victory over Wladimir Klitschko, and if his partnership with new trainer Ben Davison can be a success. Even if he does not, he will remain a high-profile fighter for as long as he fights, which after that he hopes will next be in December against Wilder.

The best of British

It is not just at the top of the heavyweight division that British boxing has the greatest presence; there are further fighters close to establishing – or re-establishing – themselves among the leading contenders, and others who are expected to join them.

Dereck Chisora
The 34-year-old revived his career when he also secured his finest victory when stopping Carlos Takam on the Whyte-Parker undercard; a similar success, potentially in a rematch with Whyte, could lead to a title shot against Joshua.

Hughie Fury
Tyson’s 23-year-old cousin was outpointed by Parker when they fought for the WBO title last year, but remains fresh and retains enough pedigree to eventually earn another world title shot.

Joe Joyce
The Olympic silver medallist, 32, is being fast-tracked by his promoter David Haye and has made an encouraging start to his professional career, winning each of his five fights. As with Hughie Fury, his abilities and nationality means there would be significant interest in him one day challenging Joshua.

Daniel Dubois
The youngest of the lot, 20-year-old Dubois has begun his professional career even more impressively than Joyce, and with eight wins from eight is similarly promising. There is already widespread belief that he has the abilities to one day fight for a world title.