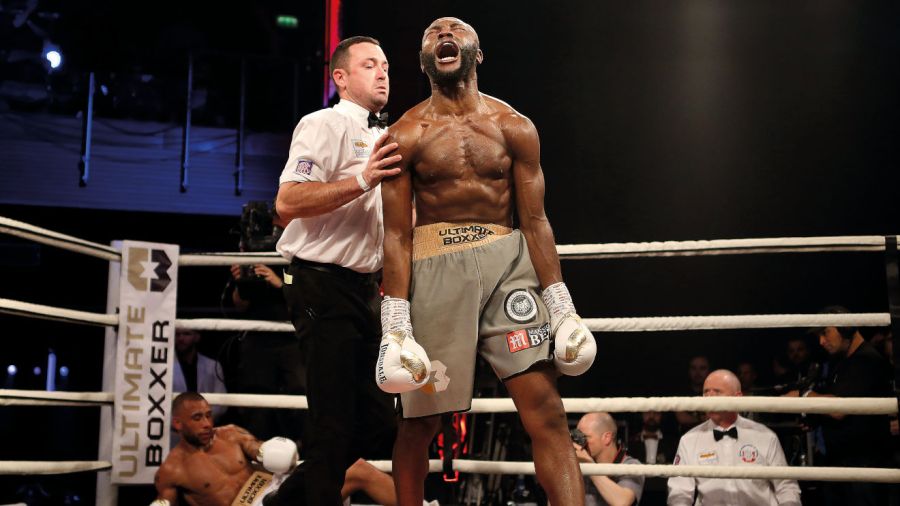 The Punching Preacher Derrick Osaze has a mission that goes beyond the sport. He speaks to John Dennen

IT has not been the year anyone expected. In 2019, after winning the Ultimate Boxxer tournament and advancing his record to 10-0, British middleweight Derrick Osaze was looking to push on to title challenges.

“I feel like I’m a new school boxer with an old school mentality. I just want to win belts and titles. I’m not chasing certain fights,” Osaze tells Boxing News.

But then the coronavirus pandemic descended and so life, and boxing, was put on hold. Osaze could not preach in person as a pastor at his church. “Church is like an escape for me, it’s like a release,” he said. “Missing the community aspect I think has been the biggest thing.”

His streams of income from boxing and youth work also dried up. “Outside of boxing I run my own business called AIM Youth, so an alternate education provider. So I go into schools regularly do mentoring sessions, assemblies, workshops,” he explained. “The moment the pandemic happened the schools shut.”

“I can imagine there are a lot more people in worse off situations.

“The pandemic has affected everyone.”

The organisation he set up, AIM Youth, is a passion project for Osaze. Through it he goes into schools to work with young people. “It stands for Aspire Inspire Motivate. For quite a few years I’ve been doing quite a lot of work in terms of schools, youth clubs. Years ago I used to work for National Citizen Service as well, so part of my job was going into schools and giving assemblies, trying to encourage 16 and 17 year olds to sign up for the NCS programme,” he explained. “Now a lot of schools are starting to reintroduce [boxing] to the PE curriculum because they’ve noticed that boxing just requires a different level of discipline that it teaches the students in comparison to other sports.

“Something I’m extremely passionate about, just helping the next generation. Just helping them reach their potential regardless of what they’re going to do.”

It’s a cause motivated by Osaze’s own experience growing up in Peckham in south London. “I’ve just had a deep passion to help young people like myself, just help people maximise their potential really. Me myself I didn’t have the easiest time in school, My school experience was quite turbulent,” he reflects. “I got excluded many, many times. So I love going into schools and being able to work with people that reflect me because I kind of know where they’re coming from. I do a lot of work with kids who are on the verge of being kicked out.

“My start in terms of life in general as a young person was quite turbulent. Many times I could have been kicked out of school, I was on the verge of being kicked out of school just before getting my GCSEs. A lot of the influences I grew up with around me could have easily had a massive effect on some of the decisions I made. Obviously growing up in an area like Peckham, I went to school with gang members. It was normal to me.”

He adds, “Most of it [his own troubles] stemmed from anger management, fighting. Teachers will say I was disruptive in class. I think I was misunderstood. I was definitely misunderstood!”

On a visit to his old school the same receptionist was still there and recalled his tempestuous time as a pupil. “She tried to find my old school record,” he said. “She said my school file was so big she couldn’t find all of it.

“I was quite quick tempered. I got into a lot of issues and fights. I think I got excluded every year from year one till year 10, I lost count literally.”

He has a serious point though when he reflects on how much low expectations can influence outcomes. “Instantly we had some teachers that unfortunately looked down at some students,” Osaze said. “If I remember some of the stuff that teachers said to us when I was in school, I can look back and say that actually wasn’t right. I remember a school teacher telling us in year seven probably half of you will end up in prison by the time you’re 20, half of you may end up dead and stuff. At the time it just blew over our heads but now I look back as someone who works in schools and think that’s not the right thing to say.

“There were some great teachers but unfortunately there were some teachers who came into that school with a bit of a chip on their shoulder and sometimes they didn’t gauge the right reaction.

“Growing up you always had that feeling of having to work twice as hard or just do better, not prove yourself but making sure you don’t end up another statistic.”

Now he is working in a different way, to put his faith in young people. “For me the biggest thing is it’s not how you start it’s how you finish,” Osaze said. “There is this notion in life that if you start bad, you can’t finish good, which I think is wrong. There’s a lot of people that may have not started on the best foot but they’re able to finish. That’s one of my big things. It’s never too late to turn it around.”

“The main thing is making sure whatever they do, they maximise, they be the best that they can be, whatever it is,” he continued. “It’s all about being passionate about whatever you want to do and working hard.

“Passion I think is something that’s kind of dying out now… Money is important but at the same time I feel like your passion will keep you going. Your passion will always find a way to pay.”

That’s been a lesson of his own life. “I made a habit to always follow what you’re passionate about,” Osaze said. “Boxing was just to keep me out of trouble and one thing led to another, went from a hobby to a passion to a lifestyle.”

He found where he belonged. Osaze once he was in a boxing ring, strangely, he felt at peace. “When I started boxing there weren’t a lot of people saying yeah go for it. There were a lot of people that were against it. But I think there are a lot of people now who understand not only the impact it’s had on my life but in terms of where I’m trying to get to or what I’m trying to achieve in the sport,” Derrick said. “For the longest time it was just me and God in terms of boxing. Because I was so stubborn, the fact that I knew that I was meant to be in this sport.

“I was so certain that this was what I was meant to be doing, irrespective of what anyone else said to me.”

“There was a level of comfort and peace that I felt in the boxing ring, in the boxing gym,” he adds. “I was so certain. For me obviously my faith is a big element of that. I always pray to God to direct me.

“It’s just that level of peace that I feel, which is weird. I think that sustained me through some of the harder times with the challenges I’ve had to face in the sport as well.

“Without my faith in God I definitely wouldn’t be boxing now.”

Osaze uses the sport to pursue his calling. Being a boxer has leant him further credibility as a youth worker and gives him a certain impact as a preacher in his church. “I love the sport,” he says. “I hate elements of the sport. I hate the fact that it means I can’t see my family all the time, the sacrifices you have to make sometimes, I hate the fact even that I don’t get to eat all the stuff I like. But for me there was just a different sense of purpose in the boxing ring.”

He finally has the chance to compete on November 10, against John Telford, which will be televised on both BT Sport and ITV 4, on a show featuring the Boxxer tournament too. With a new-born baby Osaze is more motivated than ever. “It’s given me another element of dangerousness. Because you have more things to fight for,” he says. “I want to go through the ranks… All I can do is keep my head down, keep training, keep improving, keep fighting and then whatever opportunities present themselves present themselves.

“I’m never one to call out individual fighters but if the English belt is there for the taking, 100 percent. [In future] if the opportunity presents itself to fight for certain titles, like the English, then great, if it doesn’t then we move on.

“I just want to win titles.”

The next step, the first new step comes on November 10.

The latest Ultimate Boxxer, now called Boxxer, can be viewed free-to-air, on ITV 4 (as well as on BT Sport) on Tuesday November 10. The quality four-man super-middleweight field features Zak Chelli [below], Ben Ridings, Diego Costa and Charlie Schofield and is promoted by Ben Shalom. “We want people to watch our shows without knowing who is going to win, true 50-50 fights and we are really proud of the card we have put together,” said Shalom, the youngest promoter with a UK licence. “We’re confident it will keep viewers gripped, all around a really competitive four-man, one-night tournament.” Mikael Lawal also features as well as Derrick Osaze in separate bouts.