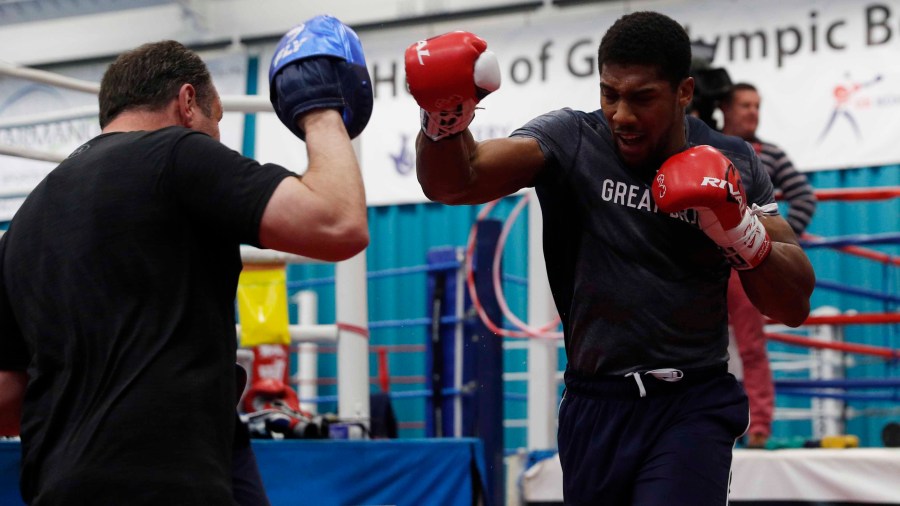 I’M inside a boxing ring with Rob McCracken, in a world of pain and trouble. The former world middleweight title challenger moves towards me ominously, hands raised and intent in his eyes. Fortunately, the only jabs he’s throwing my way are verbal.

“One-two. Again. Nice and easy,” he intones. “That’s a bit better – you were moving around like Mr Bean earlier.”

“Vaughn Bean? Went 12 rounds with Holyfield in 1998? I’ll take that,” is my sharp counter. Or rather, it’s the sharp counter that comes to me four hours later on the train home. Instead, I just suck air.

Some context: I’m standing in a ring working the pads with Britain’s premier boxing trainer in 2013, during the build-up to Carl Froch’s rematch with Mikkel Kessler. It’s a media day with Froch and his coach, which includes a training session for the assembled press with McCracken in advance.

Only the total number of assembled press who show up in time turns out to be one. Cue a mano-a-mano training session with McCracken, which would be gold dust to an aspiring young pugilist but is perhaps wasted on a wheezing hack with a very stiff neck.

But reflecting afterwards, it did occur that I had learned one thing from my experience – and it was nothing to do with footwork. It’s that McCracken is a natural born tutor. It wasn’t the content of his instruction, more his delivery: calm, reassuring and unhurried, delivered in his soothing Midlands monotone. He has stock phrases that he keeps using. “Just relax”, “Bit higher,” “That’s better”, “When you force things is when you f**k them up.”

Admittedly, that last one is delivered later on to his charge Froch, but McCracken’s manner never changes whether he’s dealing with a world champion or a (distinctly) rank novice.

Calm in a storm

Watch McCracken in the break after the first round of the first Froch-Groves fight, as his dazed charge wanders back to their corner after that sledgehammer knockdown and bedlam in the arena. However he was feeling inside, McCracken is a picture of calm. Dousing Froch with the water bottle, then leaning into his ear to deliver his wisdom. If McCracken raises his voice at all, it’s only to be heard over the raucous crowd.

He has the manner of a natural teacher. Perhaps he’d be educating kids in history if he wasn’t doling out lessons in hooks. Of course, none of this comes as a surprise. McCracken’s day job is performance director of the successful British amateur set up. In this role, more so than in most elite-level professional coaches, he’s dealing with a range of boxers of different experience. He’s used to more than just fine-tuning a top professional, he can turn his hand to outright education if he needs to.

His bond with Froch was a model of trust and what a strong partnership between a professional boxer and his coach should be. His relationship with Anthony Joshua is more opaque, perhaps as they haven’t been in the spotlight as long together. If there’s no sign yet of the genuinely close friendship that he shares with Froch, the high levels of trust and respect are clear.

When I interviewed Anthony Joshua in mid-2016, I asked him a simple, open question. Who was his sporting idol? Joshua chewed the question around in his mind for a moment before giving an answer that surprised me.

“Rob McCracken. Guys like him really helped change my life. They set me up on the path. So I do my best to keep these people in my life and stay in their good books.”

It made more sense when Joshua began officially working once more with McCracken, his old amateur mentor, soon afterwards. But what’s interesting about their dynamic is that McCracken still seems a man slightly apart from the growing, fawning admiration for the 27-year-old heavyweight.

When he refers to “Anthony”, McCracken does so with the warmth but reserve of a head teacher discussing a favourite pupil. There’s no sense of awe or delight that he’s been called up to be a part of this potentially hugely lucrative gravy train. Perhaps this is why Joshua – no fool – is so keen to have a character like McCracken around him.

It may sound cruel, but the contrast with this and the Johnathon Banks-Wladimir Klitschko dynamic is stark. Banks is an engaging and knowledgeable fellow when he talks boxing. There’s no sense that he’s a hanger-on masquerading as a trainer (as was sometimes found in the corner of one Mike Tyson). But there’s also no doubt who the boss is between the pair of them.

While Joshua-McCracken seems at least an equal partnership, Banks – from the outside at least – takes his lead from Klitschko, eagerly repeating mantras or picking up on threads the man himself has delivered.

It was notable that Banks didn’t seem to impress upon his charge that rounds were slipping away during Klitschko’s loss to Tyson Fury in late 2015. Wladimir was stuck in neutral through much of the fight and if Banks had a Plan B, we caught no sight of it in the ring that night.

Of course, it’s understandable that the dynamic between these two pairings is completely different. Joshua was working with McCracken when he was a relative nobody and the trainer’s guidance helped propel him to Olympic gold in 2012. It’d be natural if Joshua feels in McCracken’s debt.

Banks is more than six years younger than Klitschko and was once a less acclaimed fighter in the stable of Emanuel Steward, the trainer they shared until his sad death in 2012. The 34-year-old Banks has been a part of Klitschko camps for some time, but it was still a minor surprise when this novice was given the full-time gig of training the world heavyweight champion after Steward’s passing.

The harsh view is simply that Klitschko craved continuity rather than being challenged. That he has coasted since Steward’s death and that Banks was a comforting yes man; one who could do nothing when a combination of Tyson Fury and Old Father Time ganged up on Wladimir in 2015.

Yet now Banks has the chance to change that perception. Wladimir came to Steward humbled by career-threatening defeats and looking to rebuild. He isn’t quite in the same boat now, but his last fight was his first loss in more than a decade – and the first time he’d actually been outboxed on the way to a defeat.

If the pair were just ticking over before, Banks now has the opportunity to say: it’s time we did things my way, Wladimir (and having his fighter actually listen).

Nothing you hear publicly indicates that’s the case. Banks has affably followed the party line of Wladimir having a bad day in the office against Fury. But that might not be an indication of what’s going on behind closed doors. There’s talk that Banks believes Klitschko has been overtraining for years and that being in good shape – but leaving a little more in the tank and relying on his brains above his outstanding athleticism – is the key to this fight.

We shall see. But while the underdog Klitschko has a huge advantage in experience in this heavyweight bout, it’s countered somewhat by the fact that it’s a complete role-reversal with their trainers. McCracken is battle tested at the highest level: in a sold-out main event at this very arena, no less. It may be a biased perspective, as I’ve only shared a boxing ring with one of them, but I know who I’d rather have in my corner on April 29th – delivering instructions in close, above the din of the Wembley crowd.