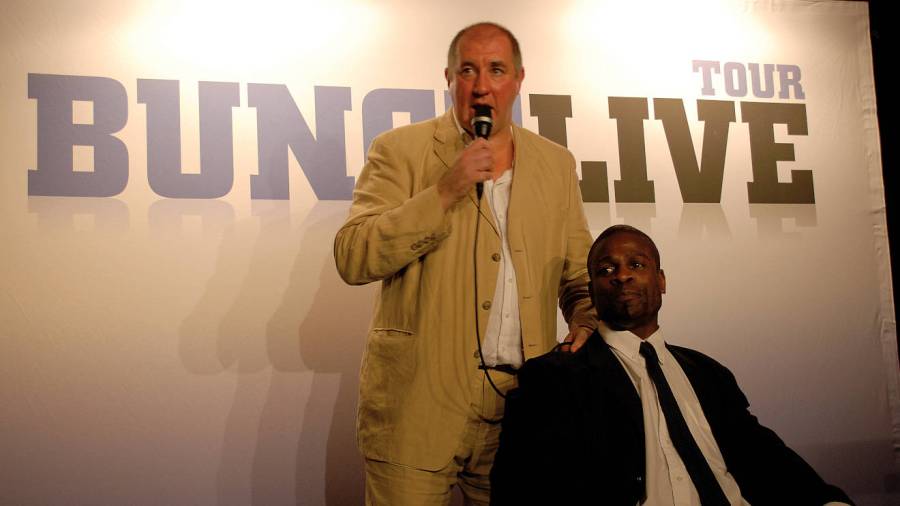 When Setanta disappeared, the Boxing Hour went on tour, writes Steve Bunce. It was not a success…

THE last Setanta boxing hour was on a Thursday in June of 2009 and five days later the channel vanished. The last guests were – all live – Enzo Maccarinelli, Frank Warren, Steve Farhood, Tony Jeffries and Darren Sutherland. And, about 100 of your emails. Less than three months later, I took the show on the road. It was a total disaster in many ways; a comedy, a mix of ego, dire planning, no planning, lies, more lies, bad hotels and, in there somewhere, some glorious nights. Late, late nights, by the way.

The plan was for a 12-city tour, but that shrunk a little bit when I found out the venue in Cork was abandoned. The man organising that show insisted that he could get a generator, a portable loo and get the boards down from the doors for the night. I swerved that and gave refunds. That sounds grand; I think there were 17 in the end.

It started in September of the year at the Lower Kersal Social Club in Salford. It’s an iconic venue, a beautiful place. Steve Foster arranged it and I went to see him and Tony, the manager, at the venue on the day. I had sold 40 tickets, but one of the men helping with the tour told me about the Facebook following. “I think about 300 will show on the night,” he warned me with utter confidence.

“Stevo,” I said to Foster. “You better open the back section and get some extra men in. I reckon about 300 will be here to pay on the door. Maybe more.” I even did a live hit for Granada news.

What a launch it would be. Matt Macklin, Foster, Matthew Hatton and Carl Thompson showed. They promised and they delivered; the boxers never let me down.

And this is what happened, not just at the Lower Kersal Social Club, but at every venue. It’s funny now, but it was not funny at the time.
The venue was set for about 250 seated and about 200 standing. The bar was packed on the serving side, extra security hovered. I had the scripts in my head. The doors opened and we waited and waited. Nobody paid on the door and only about 20 of the people who bought tickets showed. Other than that, it was a great show. I sold about 10 T-shirts and gave away another 10 and that left me with 1,990 to sell. To cut the T-shirt story short: If you want one, there are still about 1,950 available.

I have forgotten the exact sequence of the shows, but I moved on and did Sunderland, Dublin, Belfast, Leeds, Birmingham, East London, South London, Loughton and Nottingham.

In Sunderland I had been told that it would sell-out and I should get a bigger venue. Actually, somebody wanted to buy me out, offered me a fortune for the 250 tickets. I said to him: “No need, I have a good feeling about it.” Six came. I tried to auction a Ricky Hatton-signed T-shirt; I was offered a fiver. It was that type of night. T-shirt sales: zero.

Leeds was great. Sure, no T-shirt sales and only about 25 in the Irish Centre, but great people. Qais Ashfaq and Jack Bateson on stage, both still kids. Dave Coldwell showed. The Q&A was about an hour. It was perfect for boxing fans. We had a good drink that night.

In Nottingham, Andre Dirrell joined me on stage. Paddy Considine was in the crowd. Well, sure, crowd might be stretching it. Mick Hennessy was there and I think he donated 250 quid to a local amateur club. No idea if we even took the T-shirts. I was introduced by Thomas Treiber.

In Birmingham, at the Dubliner, Big Joe Egan was in demand, Jon Pegg was there with the Eastside Boys, Macklin travelled down with his European belt and the boxing crowd shared the space with a dozen homeless people. The governor at the pub opened his doors once each week and fed people who needed a meal. We were double booked with people carrying their sleeping bags. It was hard to tell the difference at the end. It was a brilliant night. I gave away a few T-shirts, that’s for sure.

John McDonald worked wonders in South London at a social club in Wallington. At times, it actually felt like we were in a big venue. In East London, at a comedy club near Bethnal Green, there was a warning that 500 would show. They never did, but David Haye, Errol Christie and Wayne Alexander did. It was less than 10 days before Haye’s fight with Nikolai Valuev. As I said, the boxers never let me down. Sweet Errol was raw and open. I think I gave Errol a T-shirt. I hope I did.

Maccarinelli, Jason Cook and Nathan Cleverly all came to the show with their belts on a Tuesday night in a Swansea nightclub. I held up the start because two coach-loads were driving over from near Cardiff. They never showed; I was told that a woman fell over walking a dog and that set in motion the withdrawal of 90 people on the two coaches. It’s hard to invent this stuff.

The shows in Dublin and at the Dockers in Belfast had their moments. They were busy and raucous. Paddy Barnes was in Belfast.

And I finished in Loughton, in the centre where Jim McDonnell trained his fighters; I had done 10-consecutive weeks. Loughton was golden, tight and packed. McDonnell, Alexander, Dave Odwell and dozens of old East End amateur boxers. It was like a reunion. I knew after 10 hard weeks what worked; do the show in two segments, hold back the best stuff and finish on questions. Bingo.

In the shows I used some lively language and that caused an immediate problem when a familiar face – an ex-amateur of about 40 – sat not four-feet from me in the packed room. That’s not the problem; the problem was his 13-year-old daughter at his side. I was uncomfortable swearing in front of a child. The boxers, meanwhile, just carried on talking, swearing, laughing and occasionally somebody would ask me: “Buncey, who did Mittee beat in the London finals after the Olympics?” I would be in the middle of a Joe Bugner story and would have to stop, think and reply: “Sid Smith at the Royal Albert Hall,” It was nuts, but everybody seemed very happy. At the break, after about an hour of talking, not swearing and answering questions, I called it off, went to the bar and toasted the tour.

And, it turns out the girl was 38, a health freak and certainly not his daughter.

I gave her a T-shirt.