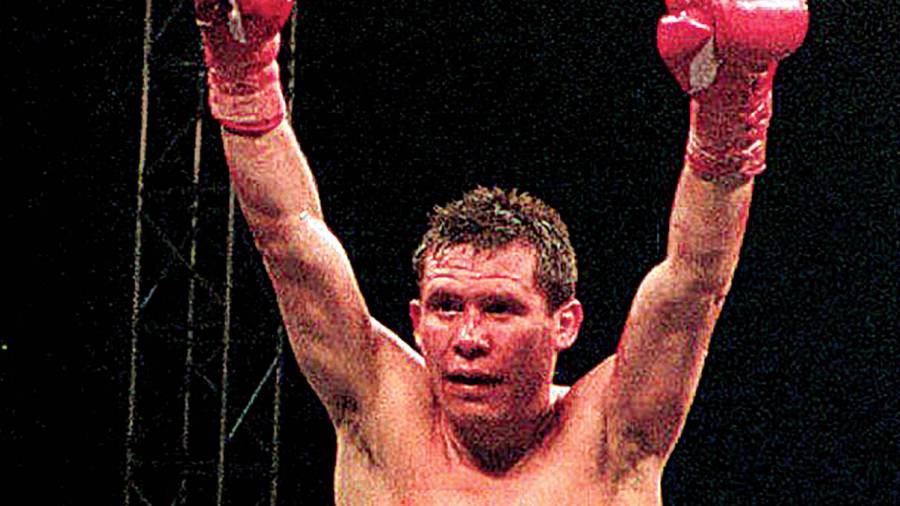 AT a bullring in Mexico in the winter of 1993 the great Robbie Davies was at ringside wearing his Commonwealth Games blazer. Backstage, in a cold room used by the apprentice matadors, Andy Holligan was getting ready for the fight of his life against the hero of all Mexico, Julio Cesar Chavez, for the WBC light-welterweight title. There was no need for bookies.

On the night, as he walked to the ring, the fans were clustered in the cheapest seats – not seats, just concrete slabs – around fires burning in metal drums. I could see the high flames whenever anybody spat a mouth full of beer into the barrels. It was a vision of hell from my safe ringside seat, but Holligan had a serious go and knew exactly what he had signed for. “I’m not stupid, I’m fighting a living legend,” he said on the Wednesday.

Davies was up throwing punches, shouting and ducking and diving during the fight. He was a man totally devoid of any notion of fear, that is for sure. He was the ideal travel companion for the journey and the tight, tight blazer just added to the look.

It was a lost and painful cause and at the end of round five, Arthur Mercante, the iconic referee, went to Holligan’s corner. Mercante told Colin Moorcroft: “I think this fight should end.” Moorcroft and Frank Warren pulled Holligan out. It was a perfect mercy stoppage. Chavez moved to 89 wins that night and no defeats.

A few days before the fight there was a run through the streets of Puebla with Chavez, a simple idea where the champion of Mexico would run and thousands would follow him up and down the cobbled streets. It was a lift from Rocky and there would be stray dogs, shoe-shine boys, joyous teens, cameras and publicity. It made sense; short run, nice pictures and then a word with the idol. However, it turns out I had the right attitude but at the wrong altitude. At 7,200 feet, I was finished after 10 minutes, gasping, sweating, struggling and drinking water, hallucinating on the steps of the restaurant that had served me chocolate-flavoured chicken the night before. It’s a local delicacy. The run was not nice and the chicken was not for me.

Back at the Maison Del Extortion, the wonderful fight hotel, where the management had hiked the prices by about 300 percent without any warning, there was a growing crisis in the Michael Nunn camp; the champ was heavy, very heavy. He was in and out of a steam room, looked drained and dangerously close to collapse. It was a regular thing with Nunn, who was six-foot tall and big. And he lacked discipline.

Nunn’s condition led to one of Don King’s greatest lines, a wicked blend of wit, grit and product placement. One day, at the edge of the pool, King was asked about Nunn’s issues with weight and whether he could recover for Saturday’s fight with Merqui Sosa for the WBA super-middleweight belt.

“Sure, Nunn can soak his balls in frosty Coronas,” said King as he pulled a bottle from a bucket of ice, the water dripping all over his safari suit. It was perfect. Nunn won, beating Sosa on points to retain his title. It was his last win in a world title fight and just his latest battle with the scales. Sosa, incidentally, is one of the bravest and most fearless men I have ever seen live.

Hector Camacho and Oliver McCall were also on the long bill; they were not guests at the same hotel. I can only imagine the party I missed late that night somewhere in Puebla. I chose a sensible late-night end, found somewhere to eat and a place where competing Mariachi bands would sing a lullaby to just about any fighter you requested. It cost a few pesos to hear the glory in their words and watch their actions. They tell a story of a fight; they put on imaginary bandages, walk to the ring, touch gloves and retell the action. It’s mesmerising and those fabulous, emotional songs should be called boxeocorrido, the boxing version of the infamous narcocorrido ballads, the ones dedicated to drug dealers and killers. I have no idea if Nunn, Camacho and McCall have their own back catalogue.

So many of the old, old King bills in the Nineties had hidden gems. In Puebla, Derrick James, the trainer of Errol Spence, moved to eight and zero with a win over the legendary Irish Danny Morgan. In another world title fight, Terry Norris was knocked out by Simon Brown for the WBC light-middle title. Norris and Brown is a main event in any language.

So, it was a tough, tough night for Andy Holligan in that faraway and hostile place. Chavez was respectful after the fight, not calling Holligan a “coward, bitch, dog” like he had with Greg Haugen earlier in the year. Incidentally, Chavez fought six times in 1993 and that includes the draw with Pernell Whitaker. He actually fought in Juarez six weeks before the Holligan fight. This sounds like a Fifties fighter, not a very modern great.

Chavez would lose for the first time in his next fight, a split to Frankie Randall at the MGM in Las Vegas. His troubles away from the ring had started.

Holligan was the British champion at the time and he lost for the first time in 22 fights; just six-months later he was beaten by Ross Hale, losing his British title.

Nunn lost his way after Puebla. In his trial for possession of cocaine in 2003 it was claimed that 1993 was the year he developed a cocaine problem – it was, sadly, probably earlier than that. He was sentenced in 2003 to a staggering 24 years in prison for paying an undercover agent 200 bucks for cocaine; he walked free in August, 2019.

McCall had his demons for years, Camacho is dead. Don King was reunited with Mike Tyson last week in Florida. In Mexico they still sing songs about Chavez and what he achieved in the ring and, with even more affection, his hard times since boxing. Even Saul Canelo Alvarez will never replace Chavez in the hearts, souls and minds of the Mexicans.