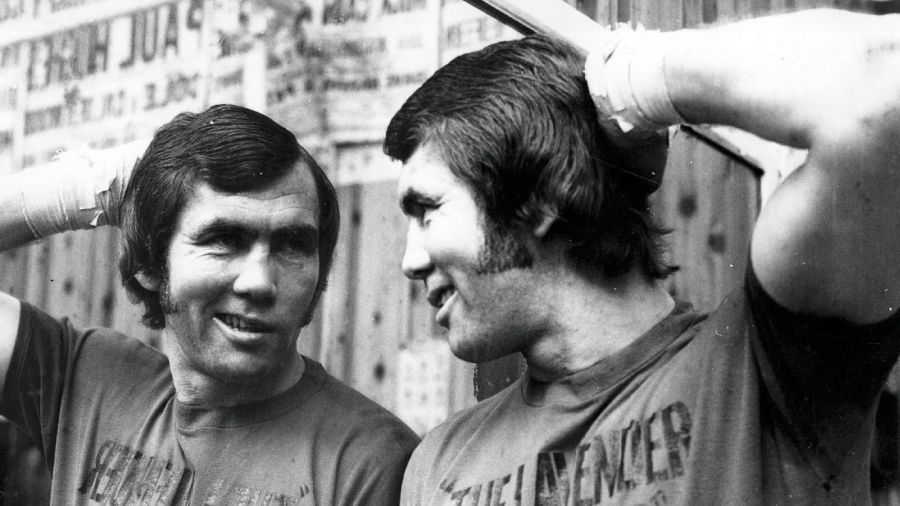 Alex Daley looks back at a talent-packed bill from this week in 1972 featuring Chris Finnegan, Joe Bugner, John Conteh and Alan Minter

AN array of talent was on show at Wembley’s Empire Pool this week in 1972. British and European light-heavy champ Chris Finnegan and his brother Kevin (a future British and European middleweight titlist), European heavyweight ruler Joe Bugner and future world champions John Conteh and Alan Minter were all on the card. Chris topped the bill in a fight that promised to propel him to a second world title match with the legendary Bob Foster. In his first title tilt, less than two months earlier, he’d lost courageously in 14 rounds to Foster.

Finnegan’s manager, Sam Burns, claimed tiredness was partly to blame for the loss and said his man would do better in a return. Bob was booked a fortnight hence for a heavyweight match with Muhammad Ali, but was receptive to a rematch with Finnegan, who was still ranked as his number-one contender. Britain’s Harry Levene was angling to stage the prospective bout in London, while a Detroit promoter was offering Chris £39,000 for the fight, provided he beat his next opponent, German champion Rudiger Schmidtke. Schmidtke was a solid 25-3-3 but had never boxed outside of Germany and was considered a low-risk opponent for the Brit.

Finnegan started as a firm betting favourite and in the first five rounds these odds looked justified. Schmidtke, a blonde-haired former male model, seemed to be troubled by Chris’ forcing tactics and crisp body punches. But a subtle shift in the sixth saw the German start to fire back. Finnegan kept attacking but was taking too many counters. Blood streamed from his right eye, but he kept piling forward, seemingly happy to take the German’s blows in order to land his own.

In the 12th, this policy badly backfired, as Finnegan walked on to a crashing right hand. The impact caused him to reel back and seconds later blood was spurting from a gaping wound on the bridge of his nose. A ringside doctor looked at the injury and allowed the fight to continue. But only briefly. As Chris charged in hoping to finish matters – his face now a blood-smeared mess – Schmidtke landed more punches on the damaged proboscis. The ref rightly stopped the fight, thus relieving Finnegan of his European title and dashing all hope of a quick return with Foster.

On the undercard, Joe Bugner hammered Utah’s Tony Doyle to defeat in eight and Kevin Finnegan, the reigning Southern Area middleweight champ, pounded out a clear-cut points win over Trinidad’s Carlos Marks. Former ABA champion and Olympic bronze medallist Alan Minter made short work of Middlesbrough’s John Lowe, forcing the ref to intervene in the third, and in a heavyweight match John Conteh KO’d Johnny Hudgins of Miami in the same round.

Conteh and Chris Finnegan were on a collision course. After realising he was too light to make the grade at heavyweight (Ali apparently told him: “Get out of my division – you’re too small!”), Conteh would drop to light-heavy and take Finnegan’s old European crown from Schmidtke to set up a May 1973 showdown with Chris for the European, British and Commonwealth belts. John would win that one on points, plus a return a year later by stoppage. In October 1974, Conteh reached the sport’s pinnacle when he beat Jorge Ahumada for the vacant WBC title.

Finnegan fought on until 1975 when a detached retina forced him out of boxing. In his final ring appearance, he recaptured the British light-heavyweight title from “Gypsy” Johnny Frankham to win a Lonsdale Belt outright. It was a fitting finish to an outstanding career – a career that could have been capped by a world crown were it not his misfortune to box in the era of the great Bob Foster.