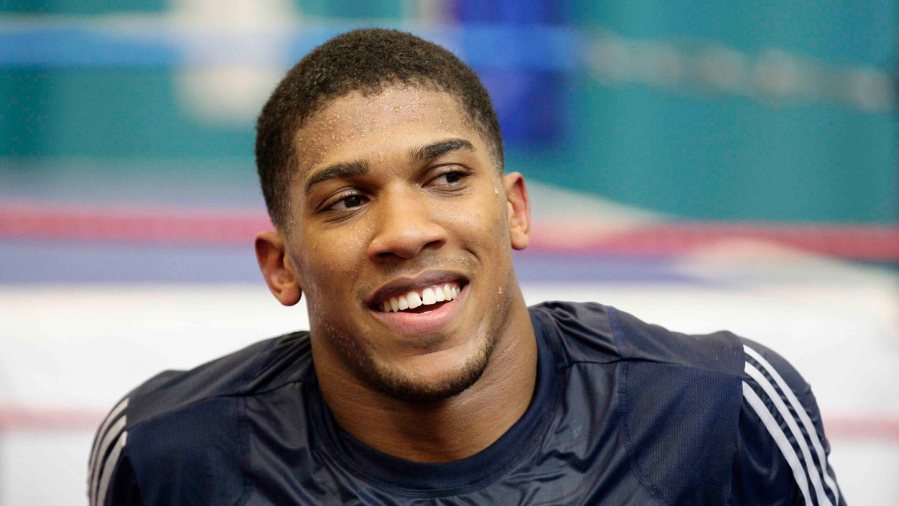 In an exclusive interview Declan Taylor goes back to where it all began and sits down with one of Anthony Joshua's first coaches, Sean Murphy

“LOOK how fat they look,” Sean Murphy says, holding two swollen fists in front of his face before plunging them back into the kitchen sink filled with ice cubes and water.

“They started getting like this about a month ago so I have to do this every morning. The doctor says it’s not rheumatism.”

It’s 9am on an overcast Monday morning and Murphy’s day is already one session old. As well as taking care of the many club boxers throughout the week, the former British featherweight champion also looks after personal training clients, the first of which, the 8-9am slot, recovers in a pool of sweat on the old gym’s floor.

He takes the chance to soothe his hands in the sink for a few minutes.

“This seems to work anyway,” he says.

Since the club’s most famous graduate, Anthony Joshua, parted with nearly £100,000 to buy Murphy a brand-new BMW, he has become part of the Joshua-Klitschko fight-week narrative.

That moment was captured on a BBC documentary which told the story of the IBF heavyweight champion’s meteoric rise to superstardom, thrusting the reluctant protagonist Murphy directly beneath the spotlight.

“It’s been mad,” Murphy says, drying his hands on a tea towel. “We’ve had the BBC here, Sky Sports, newspapers.

“We even had a woman come in from Germany. She was trying to get hold of us and just turned up, asked a few questions and took a photo with her phone.

“I tell you what though, those videos of me are terrible. I sounded proper punch drunk. It’s just my voice though! I was fucking cringing at it, mate.”

He also found the gesture from Joshua, who had Murphy’s name engraved on the dashboard by way of an extra flourish, a little difficult to accept.

“I wasn’t a lover of cars. They are getting me from A to B. I’ve never really looked after cars apart from keeping them clean and that.

“I’ve been driving bangers and now I’ve got a Rolls Royce. I look out my window sometimes, look at the car on the drive and think ‘fuck me I can’t believe that’s my car’.”

Despite the media interest it is very much business as usual for Murphy and Finchley ABC which is, as he puts it, ‘one of the busiest clubs in England’.

“Last year we had 230 bouts in the season, the years before that about 300 bouts,” he adds, moving from the kitchen into the gym area, where he perches on the apron of one of the two rings.

While Saturday’s mega promotion at Wembley Stadium is the commercial pinnacle of boxing in this country, clubs like Finchley remain the lifeblood of the sport. Of course the much retold story of Joshua’s transformation from bonafide toe-rag to heavyweight champion can be traced back directly to Finchley ABC, which is actually in Barnet.

“As I remember it, his cousin Ben [Ileyemi] had been coming in for about eight or nine weeks,” Murphy recalls. “He brought Josh along with him.

“We would usually have about seven coaches for the senior sessions and Josh would have been one of about 30-40 people.

“I must say, he didn’t really stand out that night, he was just a person. But he was always very friendly and he would talk to a lot of the lads – you would hear him laughing from across the gym.

“I was always on his back: ‘what you doing? Get on with your work. Why you talking?’ He wasn’t one who would every tell anyone he’s too busy, he would talk to them. He was instantly liked in the place.

“I wasn’t the head trainer at the time, Jimmy Oliver was, but he was starting to take a back seat. He wasn’t with the boys as much so I got hold of Josh and that was that.

“It all depends on what coaches are in at the time and we just seemed to click. He was always fucking talking but he was a nice kid.”

But as every coach in an amateur club will tell you, young boxers have a bad habit of going missing once in a while. Sometimes it’s the prospect of their first bout looming or a particularly bad hiding in sparring which keeps them away.

When Joshua vanished for the first time, however, Murphy sensed it was something else.

“When he first came he was here for about eight weeks or so but then he disappeared and I wondered if it was the last I’d seen of him,” he adds.

“Then it just so happened I was out and about in St Albans and I bumped into him. It was a Monday day time and I had a doctor coming in on the Wednesday. I told him ‘if you ain’t there mate, you won’t box for this club’.

“He was a bit sheepish, smirking. He just laughed it off and I didn’t know if I’d see him again but hoped he would come back.

“And I remember it clearly, the doctor was in the office and there was a big queue of boxers out the door and Josh has turned up and joined the back of it.

“Three or four of the other trainers said ‘what’s he doing?’ I said ‘he’s getting a medical’. They were saying that he wasn’t ready but I knew he would be alright. Anyway the other coaches let it go and Josh stopped his first one in the first round and his second one too. Then the other coaches said ‘you must have been right’.

“Anyway after a couple of bouts he went missing again, I didn’t see him for a couple of sessions. Then his mum rang me and said ‘Sean have you seen Josh? Can you give him a ring? I think he’s mixing with people he shouldn’t be mixing with’. I rang him up and said, pardon my French, ‘where the fuck are you?’

“I told him if he wants to box regularly he’s got to be in the gym. Then he just came back again and that was that. I dread to think what he was doing.”

As Murphy speaks, his son Danny, a professional with a 4-3 record, shadow boxes in the ring behind him. After a while he asks his dad to lace up his gloves so he can hit the bag.

“He had 54 bouts for the club,” the old man says, gesturing to his son.

“And now he’s had eight as a pro,” he adds. “Seven,” Danny corrects again rolling his eyes.

“My daughter Lucy boxed too,” he says. “She won the novices in her second season.”

Lucy and Ileyemi have a three-year-old daughter, Sienna, together meaning Murphy and Joshua are now effectively family.

When Joshua knocked out Emanuele Leo in his much-anticipated debut in October 2013, Ileyemi also made his professional debut and followed it up with two more bouts before the end of the year.

But Murphy said: “He’s not boxing anymore. He had a shadow behind his eye. He had three pro fights. They told him if he boxes again there’s a chance he could lose the sight in his left eye. Rather than risking it, he chose to retire.

“He does door work now and he also does close protection. He does Josh’s security too.”

Pictures of Ileyemi and his feted cousin adorn the club’s walls at nearly every turn, while the ring apron has been signed by Joshua, above his mantra ‘Stay humble and stay hungry’.

“It’s great for the young boxers to see all that,” Murphy says. “Josh has got a good story there, do you know what I mean?

“The only reason he has got where he is is hard work. That’s it. He did what he did in 2008, he came in here to start boxing. What he has achieved in that short space of time is unbelievable really.

“We are a community club really. Most of the kids who come into boxing are working class. They need someone to look up to. They can believe in Josh.

“We’ve got a lot of kids with one-parent families who, straight away, have no father figure there.

“We’ve got a little 12 year old and we had reporters in doing a story about the club.

“He said to them ‘I haven’t got a dad but I feel like I’ve got two – Sean and Gary. When he said it to my mrs she got right tearful. That’s what we do it for.

“I’ve got a lump in my throat now just talking about it. You don’t think like that but if you’ve got little kids looking up to you, you’re steering them what path to go down. You are a social worker in some ways.”

By now the club is half full with people of varying abilities hitting the bags, lifting weights and skipping.

“Joshua is the proof of that,” Murphy adds. “You never know when another one might walk in the door. It might be tonight.