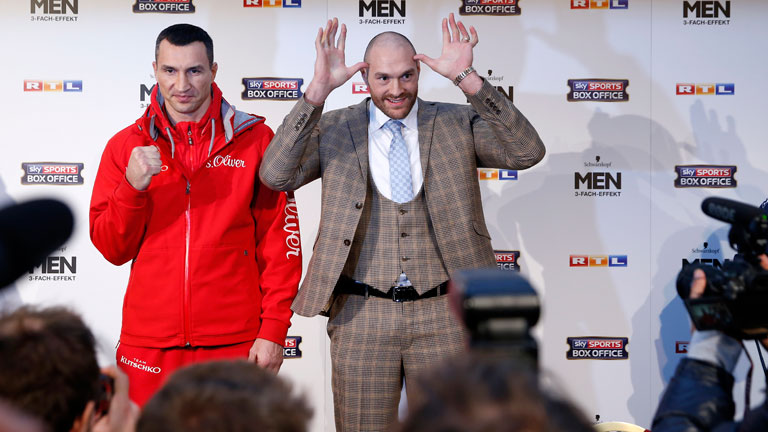 The Boxing News team discuss their hopes, dreams and fears for 2016, with the future of Tyson Fury a central theme

Matt Christie, Danny Flexen, John Dennen, Paul Wheeler, Nick Bond and George Gigney discuss the future of Tyson Fury as part of our hopes and dream for 2016  – in this week’s issue of Boxing News magazine, out on our app and in stores on Thursday (January 7).

WHAT will become of Tyson Fury this year?
DF: He will stop Wladimir Klitschko late on in their rematch, then probably find his efforts to take on the rival IBF and WBC champs thwarted by evasion and boxing politics.
GG: He’ll beat Klitschko in the rematch and start to win over the British public and media as his warmer side comes to light.
MC: One suspects the media attack has paused rather than stopped, which is a shame. Providing he and his family emerge from that unscathed, I expect his reputation – both in and out of the ring – to improve immeasurably.
JD: I think he’ll beat Klitschko in the rematch, but maybe have a frustrating time waiting for a heavyweight unification clash. Hopefully they’ll have a celebrity edition of The Great British Bake Off, enlist Fury and he’ll become a national treasure. (That’s based on my imagination as opposed to any facts mind.).
PW: With his larger-than-life demeanour, Fury will continue to be the centre of attention in British boxing. He will grab many headlines – both good and bad – and his world heavyweight title reign will be an exciting ride, however long it lasts.
NB: Expect his stock to rise in the build-up to the Klitschko rematch. Should he win, that trajectory will continue. He’s massive news either way.

TO READ THE FULL FEATURE, INCLUDING OUR PREDICTIONS FOR THE FIGHTERS OF 2016, DOWNLOAD THE LATEST EDITION OF BOXING NEWS MAGAZINE HERE NOW OR BUY IT FROM STORES ON THURSDAY (January 7).