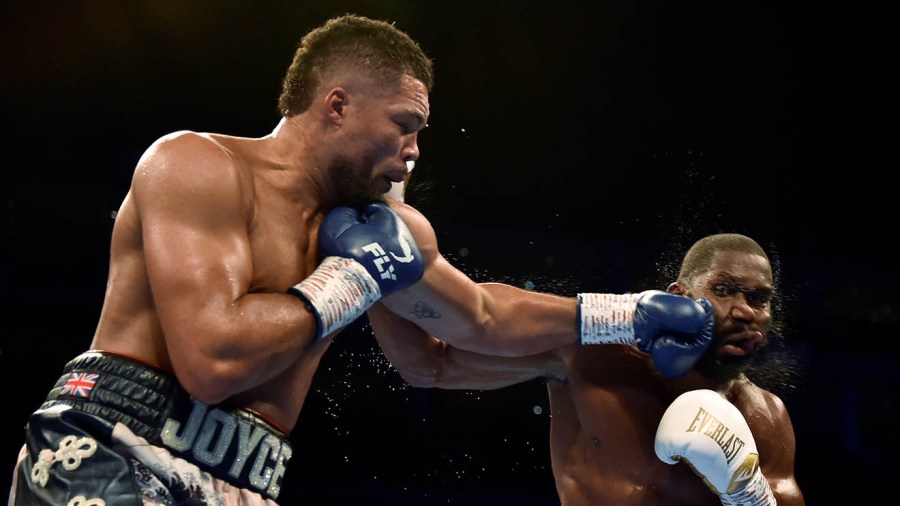 IT’S no secret what Joe Joyce is going to do. He will march into you and let punches cascade down. Those hands might not be so quick, but they’re heavy and the engine powering them is unrelenting. Whether they hit your arms, your head or your body they’ll erode your defences, chip away at your resilience and resolve unless that is you’re quick enough to get out the way and stay out the way. Or you hit hard enough to repel Joyce. Otherwise you are in for a tough night.

That’s what America’s Bryant Jennings discovered on Saturday (July 13) on the Daniel Dubois vs Nathan Gorman undercard at the O2 Arena in London.

Jennings scored with a hefty body shot early only for Joyce to regroup to control the opening three rounds. The visitor fought back. After blocking punches with his gloves, he sprang forward to clip Joe with his left hook. He brought up a swelling beneath the Londoner’s right eye but did not hurt him or persuade Joyce to back off. Despite those clear, crisp hits, Joyce assailed him continuously, ploughing forward to take rounds by sheer force of effort.

Referee Steve Gray helped Joyce on his way deducting a point from Jennings in the 10th round, harsh as Joe was hardly a stranger to rough work himself. This was a close fight. But considering that Jennings is a contender who went the distance with Wladimir Klitschko in 2015 and went into the 12th round with Oscar Rivas earlier this year, the result alone is impressive for Joyce, an Olympic silver medallist in just his 10th professional contest.

Joe won a unanimous decision, Pawel Kardyni scoring 115-112, Manuel Palomo and Robert Williams were too generous with 118-109 and 117-110 their respective tallies.

Sunny Edwards poses a very different type of problem to Joe Joyce, but one to which there is no easy solution. He moves quickly, easily and counters with slick skill that’s almost insolent. Mexico’s Hiram Gallardo soon recognised he could not outbox Edwards and his efforts to out-fight him were also thwarted. He charged the Croydon super-flyweight in the second round but Edwards was gone, landing a right hand to help Gallard on his way to the canvas.

Sunny continued to judge the distance between them perfectly, whipping hooks over to score and finishing with an attack when they traded combinations. He won a unanimous decision after 10 rounds, 99-90 for Bence Kovacs, Valerio Mosca and Terry O’Connor. Marcus McDonnell was the referee.

Liam Williams continued his devastating run at middleweight. Karim Achour had gone the distance with David Lemieux but Williams handed the Frenchman a first stoppage defeat and one that came within two rounds. Punching with clean power the Welshman wobbled Achour and dropped him with a hook to head. He allowed his victim no room to recover. Williams pounced on him at once, bowling him back down to the canvas. Referee John Latham had to spare Achour from further punishment at 1-51.

Archie Sharp and Jordan McCorry engaged in an exciting 10 round clash. Welling’s Sharp put the Scotsman down in the third round, when he skewered McCorry’s ribs, neatly angling up a heavy left hook. McCorry came back at him in the next round, look to seize back the initiative with swarming aggression. It drew Sharp into the battle. But Archie targeted the body with success and was the more accurate of the two with a shade more power. Sharp won a unanimous decision, 98-91 for Bence Kovacs, Valerio Mosca and Terry O’Connor. Marcus McDonnell refereed.

Ilford’s Hamzah Sheeraz is an explosive, tall man. Thin and rangy, he still crushed Bicester’s Scott James, rocking him with firm left hooks before opening up with long punches. He crumpled James into a corner and referee Kieran McCann had to stop the contest at 1-32.

Carstair’s Willie Hutchinson was in control throughout his six rounder with Josip Perkovic. The Scotsman started off at a sedate pace but as the bout progressed he cranked up the power in the right hooks he hacked through the Croatian’s defences. Perkovic engaged little, shifting himself across the ring to last the course, losing 60-54 for referee Kieran McCann.

Sydenham heavyweight Jonathan Palata wasted little time with Ferenc Zsalek. The Hungarian grunted with the impact of a body shot and at once Palata battered him off his feet. Zsalek did manage to catch him with a right uppercut, only for the Londoner to barrel back into him and stop the visitor after a mere 1-35, referee Chaz Coakley sparing Zsalek further punishment.

Florian Marku prevailed in a bizarre encounter with Tony Broadbent. The former had a vocal contingent of Albanian supporters in the arena but allowed Broadbent too much space to showboat. Marku walked straight after the man from Leeds, getting square on but eventually managed to club Broadbent to his knees. Referee Chaz Coakley counted him out at 2-32 of the fourth and last round.

Jerson Larios scooped his hair out of his eyes. Whether it was force of habit or showboating, it was a mistake. London prospect Dennis McCann darted in with a straight one-two that sent the Spaniard’s legs jittering. Larios’ mop of hair bounced beneath a further barrage. Jerson was tough enough to withstand McCann’s power but Dennis was too crafty for him, holding his lead right out to flick in punches. He screwed his right through to heave in an accurate left and won a 40-36 points decision. Chaz Coakley refereed.

Southpaw Mark Chamberlain towered over Sergio Gonzalez. The Portsmouth man marked the Spaniard out with jabs before moving in to blast Gonzalez off his feet twice in the first round, his left hand doing the damage. But Gonzalez sucked up the pain to last four rounds, succumbing 40-34 for referee Chaz Coakley.

Erith’s Jake Pettitt was a class above Elvis Guillen. He knocked the Spaniard off his feet in the third round, his left sneaking round the journeyman’s defences and took a 40-35 after four rounds for referee Kieran McCann.

Bexley’s Micky Burke made his pro debut, winning a 40-36 decision for referee McCann after four rounds with persistent Michael Williams.

The Verdict Joyce might not have been as frightening as Dubois but beating Jennings is a good result nevertheless.