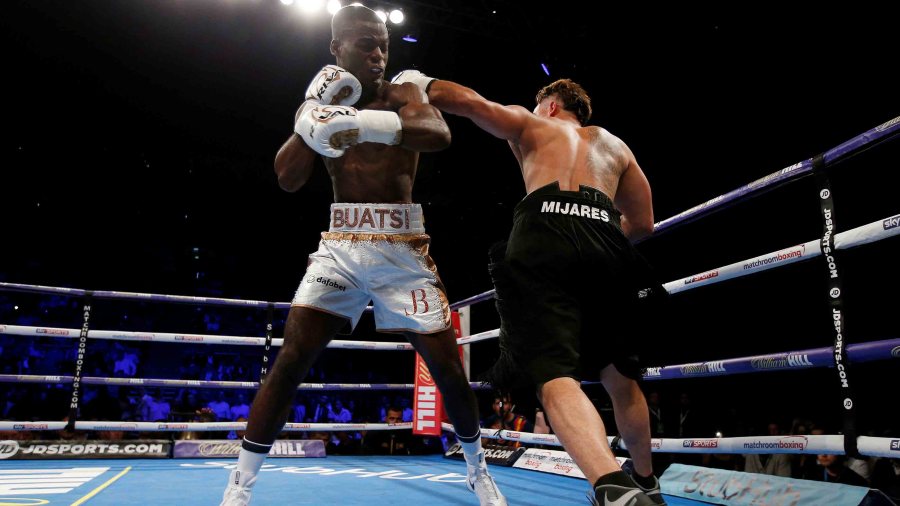 A south London homecoming fight could be next for Joshua Buatsi, writes John Dennen

OLYMPIC bronze medallist Joshua Buatsi got his professional career off to the perfect start on Saturday, battering game trier Carlos Mena to defeat inside two rounds at the O2 Arena in Greenwich.

“It was good to get out there, see what it’s like, get the feel of it, box in front of people, small gloves. I enjoyed it, it was good,” Buatsi reflected. “I felt I hadn’t been in the ring for a long time, it was a matter of going through whatever I needed to go through to get out there and perform. But once I stepped through those ropes, I was like, ‘No matter what happens, I’m winning this fight. However I win it.’

“He came, he landed shots as well. It was competitive enough for a debut, so it was a good choice by the team… It’s good that I had someone to fire shots back. Opponents that hit back, I prefer that.”

Particularly notable were quality right hooks that hurt Mena badly to the body. “He had a good tight guard, so I was thinking let’s go downstairs. The opening came and I took it. It’s something I’ve always been working on,” Joshua said. “It was against an opponent I was supposed to beat, so we have to wait until I go into a 50-50 fight, we can then judge me for my character, my skills, whatever.”

His promoter Eddie Hearn suggested Buatsi’s next fight could be a south London homecoming. “I might do some kind of NextGen show for him in Croydon, Crystal Palace,” Hearn said. “Croydon I’d like but Fairfield Halls is under renovations I believe. So Crystal Palace isn’t too far. We’ve got a few other boys that way, Charlie Edwards has got to fight Matthew Chanda, he’s around that neck of the woods, Jake Ball’s down there in Surrey, Craig Richards is from Crystal Palace. So it’s just a case of if we can get him out abroad, we’ll probably do that but if not we want to go middle, end of August. Those NextGen shows, we need to be a little bit more competitive on some of the fights but we’ll have a British title fight on the card as well. It’s great for the fighters to go and headline, we saw it with Josh Kelly in Newcastle.”

Otherwise boxing on the Terence Crawford-Julius Indongo undercard in August remains a possibility. “We’ll see. Because he started quite late I’d like to get him two before September. He’s going to box September, October, November, December, so he’ll box four times during that period,” Hearn said.

“He will definitely box on AJ’s next fight undercard. That could be Nigeria, it could be Cardiff, it could be Las Vegas. A great position to be in for him. But we want to try and build him in all the key markets.”