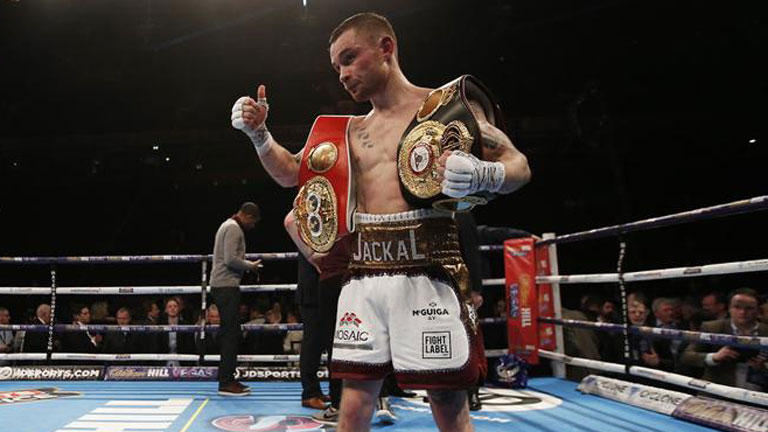 Barry McGuigan and Carl Frampton reflect on an amazing night

BARRY McGUIGAN was in tears at ringside as Carl Frampton was declared a majority points winner over Leo Santa Cruz after 12 titanic rounds inside Brooklyn’s Barclays Center. The victory – long predicted by Team Frampton – makes the Belfast star the first Northern Irishman to win world titles in two divisions after claiming the WBA featherweight title, the championship McGuigan won 31 years ago.

In the aftermath, during an emotional interview with BBC Radio Five’s Mike Costello, McGuigan described “one of the greatest nights of his life.”

“We’ve always believed he could beat Santa Cruz.,” McGuigan said of the fighter he has guided expertly from the start. “We knew he had more talent, he had more movement, and he would bamboozle him with his feet.”

The contest – surely a contender for Fight of the Year – swung both ways with both fighters enjoying success. But the consensus was that Frampton, whose tactics were hard to fault, had done enough to edge to victory. The judges scored 114-114, 116-112 and 117-111.

“We worked on the single shot counters, he [Frampton] hurt him several times with right hooks around the side. He did get a bit right hand happy as the fight went on but I thought it was a beautiful performance,” McGuigan continued. “He stood and fought with Santa Cruz, and Santa Cruz doesn’t like to be pushed back.”

The Hall of Famer has long campaigned for Frampton to take on Santa Cruz, and even Carl himself last week told Boxing News he would “show exactly why” they wanted the fight so much.

McGuigan said: “What I said at the beginning was, he’s got to fight him when he [Santa Cruz] wants to box and box him when he wants to fight and I thought he carried it out to a tee.

“It was an amazing fight, probably one of the fights of the year and I’m just thrilled because I knew he could do it. He’s a super kid, he’s a great fighter, and he’s an underrated puncher. He’s the whole shebang, I promise you.

“This is one of the greatest nights of my life. If you can’t do it yourself, if you live it and breathe it with your fighter, it doesn’t get much better than this.”

So what next for the unbeaten 29-year-old who has now won three world titles across super-bantamweight and featherweight?

“I wanted to be in with true champions like Leo Santa Cruz,” Frampton said about the possibility of rematch. “This guy is a three-weight world champion. He is a true warrior and I respect him a hell of a lot.

“I would love to bring him to Belfast and show them an amazing fighter but I have a good relationship with Lee Selby’s team. I want to be the best and be involved in big fights.”

Selby, who holds the IBF featherweight title and represents an enticing test for Frampton, but the Welshman – who was out in New York this weekend for the fight – may have to wait for the Santa Cruz rivalry to run its course.

Certainly, fans, and Santa Cruz, would welcome the return.

“It was a pretty tough fight but now I want a rematch. I don’t care where,” Santa Cruz said. “He’s a great champion and he’s got a very difficult style. It’s hard to forget your first loss but I will go back to the gym and get a rematch.”

FOR THE FULL RINGSIDE REPORT, DOWNLOAD BOXING NEWS ON TUESDAY