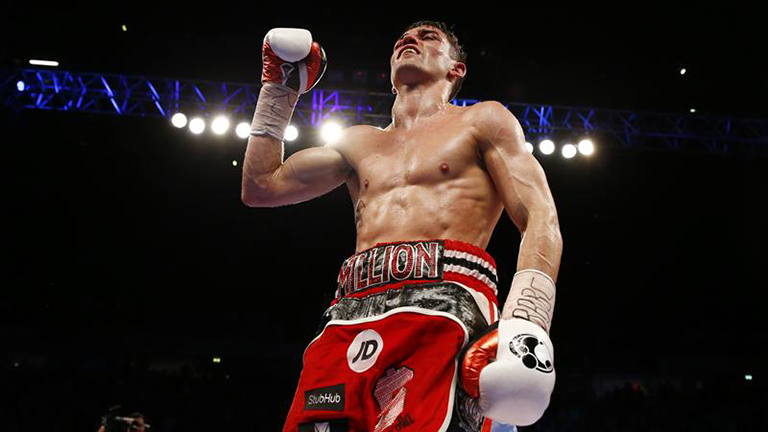 FORMER WBA  lightweight world champion Anthony Crolla is ticking over in the gym, waiting to make his next move after losing a second time to excellent Venezuelan Jorge Linares.

His trainer Joe Gallagher wants Crolla to return to world title level. “It’s been a rollercoaster of emotions with him since he’s come back from his injury. He’s had five tough, high level championship fights at world level, two with Perez, Barroso and Jorge Linares. Each time Anthony’s pushed the boundaries higher and higher and there’s no shame in his last fight with Jorge Linares,” Joe told Boxing News. “We’ve got to sit down with Anthony, whether he wants to come back in a 10 round contest against an opponent sort or to go straight back in at the deep end. It’s interesting seeing what happens now with [Jorge] Linares and [Mikey] Garcia, are them two going to fight? [Dejan] Zlaticanin, he’s still about in the mix. I see there’s talk that they’re trying to make [Vasyl] Lomachenko and Terry Flanagan. It’ll be interesting to see.”

Gallagher is eyeing a fight overseas for him. “Unless there’s a big opportunity or offer, I wouldn’t mind trying to get Anthony Crolla his Vegas night. A fight in America, in Vegas, whether it be in an eliminator, a final eliminator or a 10 round contest against somebody in America on a Vegas undercard somewhere. Give his fans what they’ve always wanted, that Vegas night. If that was to be on the Canelo-GGG undercard or something like that, I don’t know. I think everybody knows Anthony has great support everywhere he goes, he sells tickets,” Joe said.

“I’d like him to have a date abroad on a big show and to give his fans that away day trip. Whether it’s a 10 round contest to ease himself back into it or whether it’s a world title shot or eliminator, it just depends what’s out there, what’s on offer at the moment. Frank [Warren] and Flanagan’s lot have made quite clear  they’re not interested in fighting Anthony Crolla now he doesn’t have a belt,” he added. “There’s a new European champion as well, whether that’s a step back, there’s plenty of options available to Anthony. We’ll just have sit and wait but I really would like Anthony to have an away day for his fans, whether that’s Las Vegas or New York remains to be seen. We’ll see what happens.”

“He’s had five tough fights. You look at all good fighters that fight, they all come back with a confidence builder, whether it’s a 10 rounder or whatever, just to get that win and come back again, ready to go again. He just needs to get that win,” he continued. “A good rest, come back, a good camp, fight, get the juices going enough and the excitement of fighting abroad and the challenges that brings with it, get a win and put himself back in the mix again. If Linares does move up to fight a Crawford, or Garcia does, I think the lightweight belt picture will open up again. And Anthony could be in a position to challenge for one of the world titles again.”