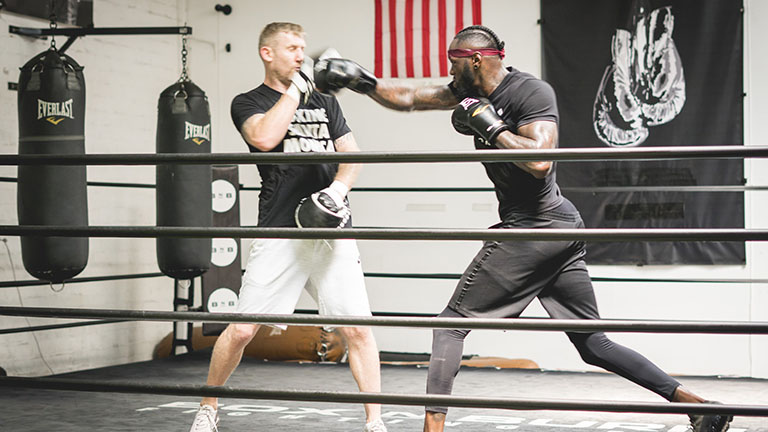 In his Letter from America, Tony Jeffries describes taking Deontay Wilder on the pads and what makes him so effective

LAST week I trained and spent time with the current WBC world heavyweight champion, Deontay Wilder. After he posted a picture of us training together, my social media blew up with people asking me about his power, speed, attitude next opponent, and pretty much everything else you can think of.

The last time Wilder lost was actually about an hour after my last defeat back in the 2008 Beijing Olympics semi-finals. He competed in the weight class above me and we both came away from the Games with bronze medals, which when I met him gave us an instant bond in a way.

He came to the gym I co-own in Santa Monica, Box ’N Burn, and I trained him for a TV show he is to be featured in. He was great – his energy and confidence were through the roof. I’ve never met Mike Tyson but for some reason he reminded me of him in some ways.

Catching the mitts for him was really something else, I must of caught punches for over 20,000 people in my time from working in the boxing fitness industry day in day out for the last six years. And Wilders power was way harder than anyone else, but what impressed me more than the power was the speed and accuracy of the shots. They were hitting right on the target with extreme force every time, and for a man that size to be so elusive was very impressive.

People have asked me what I think he should work on in his boxing technique. If he didn’t have a 40-0 record, KO-ing almost every man he has boxed, I would have said clean his straight punches up but … What I would say is keep doing what you’re doing because it’s working great! Those wild, crazy shots he throws are very difficult to prepare for, and he knows that. So he needs to keep that.

He was telling me then that the fight is 100% on with Tyson Fury, and that Fury is a real man of his word and once he says he will fight, then they will fight.

Now I know both Fury and Wilder personally, I’m even more emotionally involved, which for me personally is a great feeling when it comes to fight night.

Listen to my latest podcast here where I talk all about his power, speed, next fight and my prediction for him and Tyson Fury. LISTEN HERE

The Box ‘N Burn Academy is running a training course in Sheffield this weekend. Find out more here