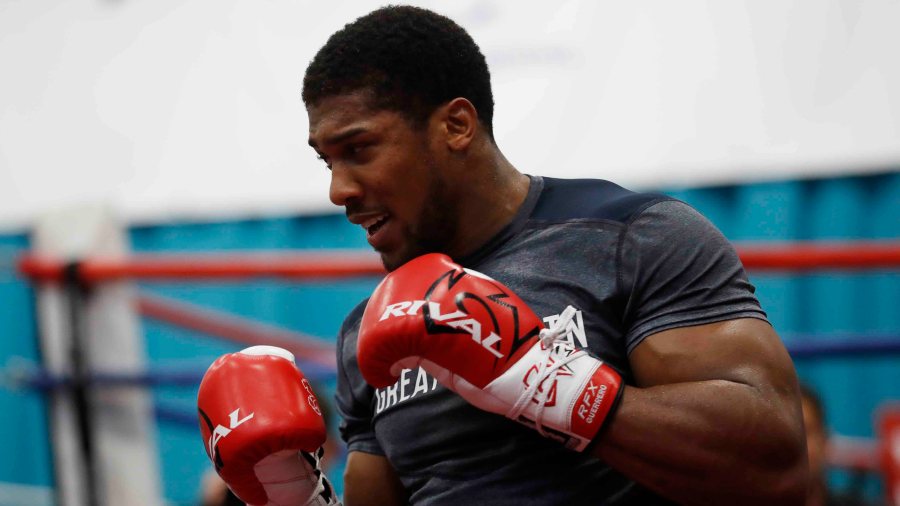 Don't make him angry. You wouldn't like Anthony Joshua when he's angry

THERE’S no doubt that Anthony Joshua is itching simply to get in the ring with Wladimir Klitschko. The last few days still need to tick down before the fight but the bulk of his training is done, with only tapering left after a hard training camp. But tensions will surely mount ahead of a contest hugely significant to British boxing and to Joshua himself.

He however cautions, “You’ve really got to get under my skin for me to whale out [in the build-up to fights]. The thing is, it’s a bit of an issue because I don’t want to get any bans or fines. I’m not the best verbally. I don’t want to lose control of myself, as that’s not a good place to be. So I just try to reserve myself a bit.

“I get angry quite easily when I’m tired from training. I get angry with my trainer [Robert McCracken] because he pushes me all the time. But it’s discipline, isn’t it? You have to be disciplined. It’s like when your coach tells you your left hook is wrong, and you think, ‘Right, I’m going to miss the pad here and go crack [on the coach], and see how bad the left hook is!’ It’s just little things like that. You have to control yourself. The lifestyle of boxing teaches you how to remain level-headed and disciplined, even when you want to lose your head.”

Joshua will be lauded if he is victorious. Klitschko may be 41 years old but he is the dominant heavyweight of his generation. The winner of this fight will surely be the leading man of the division.

“It’s so hard in this day and age to be yourself, because everyone expects you to be the way everyone else is going. If people accept me for who I am, and that fits into the bracket of being a people’s champion, then so be it. But if not, I’ve just got to stand for what I stand for,” Joshua said. “As long as [the public attention] doesn’t affect my time coming into the gym, I don’t mind. I’ve just got to get to the gym. I can’t really be waving on the streets and calling people in for photographs and signatures when I’m on my way to the gym! As long as it doesn’t get in the way of my gym time, I’m fine with everything.”

To reach this level of fame, acclaim, and success actually, the Watford man has progressed rapidly. “The [London 2012] Olympics doesn’t seem that long ago. Three-and-a-half years I’ve been a professional. That’s not that long. That’s why I like these documentaries [in the build-up] – it gives me a minute to reflect on how much has happened in a short space of time,” Joshua said. “I was supposed to be going to [the] Rio [2016 Olympics]. That’s when I was supposed to go to an Olympics, due to the fact that I needed experience. It would’ve given me seven years as an amateur. That’s a good amount of time.

“[After London 2012] I didn’t want to be headhunted as an amateur. I thought, ‘If I turn pro, I’ll go under the radar and fight in learning fights.’ Going around the country boxing [Paul] Butlin, [Matt] Legg, [Matt] Skelton, [Kevin] Johnson, Dillian [Whyte]. Now, I’m where I need to be, because I’ve learned a lot. I’m determined and confident. I’m in a good place.”

Eventually he didn’t mind leaping suddenly to world level. “I didn’t have to take the Charles Martin fight. I could’ve said, ‘No, I’m going to defend my British title and stay where I am’, but I don’t duck challenges. Now I’m here. It’s been a good journey. That’s why I feel confident. Fighting is about rising to the occasion each time. You don’t back down from any challenge,” he said.

Klitschko is indeed a huge challenge. But with British boxing already on a high, the sport in this country could be on the brink of a new era. “No sponsors would touch me with a bargepole when I turned pro. Heavyweight boxing is in a league of its own. It’s like the king of the jungle – big, strong guys,” Anthony mused. “We’re bringing big-time boxing back to the UK. When I turned pro, boxing was dead. So it’s nice that boxing is booming now.”