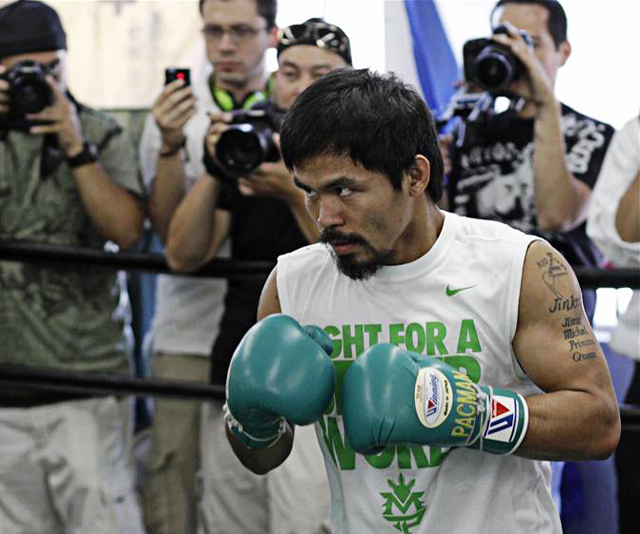 I WAS coming back from Australia, where I’d been fighting and I’d been back in England for a month or two. I was going to Boston to team up with Micky Ward – I met him in the Wild Card gym a year or two later – but I went to LA instead because Paschal Collins, the trainer, told me Freddie Roach would be the man if I wanted to learn my trade. I went to the Wild Card and asked Freddie if he’d train me. I was in the gym for six months before I met Pacquiao. For the first Juan Manuel Marquez fight they were looking for sparring partners and Freddie said, ‘We want you to spar Manny.’ We did four rounds, full-on sparring.

AFTER that spar Manny said, ‘He’s in’ and then I’d go running with him and sparring him three days a week. Then I’d only do two-three rounds each time because he’d have three-four sparring partners; he wants fresh guys all the time.  He’s one of the hardest trainers I’ve ever come across. He trains like a monster. If you can keep up with Manny Pacquiao, you know you’re a good runner, I only used to because I was inspired to be like him; he just takes off. It’s more long distance but he’s explosive as well.

Be humble AND ruthless

HE’S inspired by people coming in and watching him, he was just Manny and stayed the same. I learnt from him to work hard and remain humble. But I’ve seen bigger fellas come in, everybody wants to take out Freddie Roach fighters, people try to make a name for themselves, and Manny would just take them out.

THEY used to get a bamboo stick and whack him around the body with it, as it deadens the muscles in the body. I only did it once! He also has a square box and he bounces up and down on that for five-10 minutes after all his work is finished. In the ring he’s always bouncing in and out, his calves are massive and I think that box thing is one of the reasons