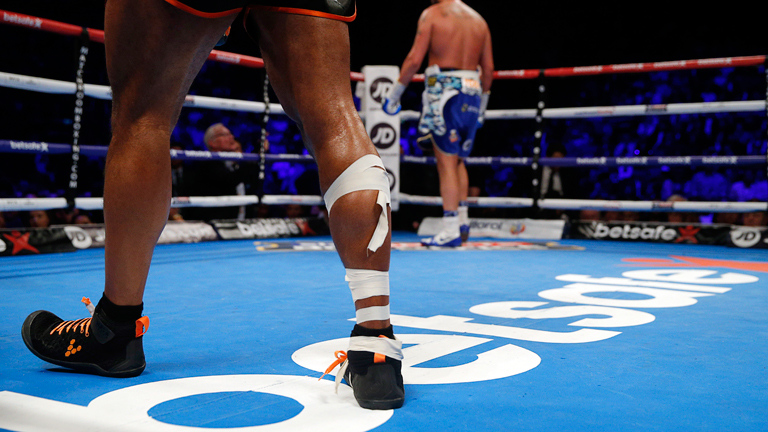 David Haye showed extraordinary bravery to fight on through his injury

DAVID HAYE is facing a lengthy recovery after completely rupturing his Achilles tendon during his loss to Tony Bellew at the weekend – but should be given enormous credit for fighting through the pain.

The injury came in the sixth round, and Haye fought on until the 11th when Bellew dropped him and his trainer, Shane McGuigan, threw in the towel.

British super-middleweight Leon McKenzie suffered the same injury in 2009 while he was a professional footballer and revealed that Haye displayed super-human courage to slug it out with Bellew after that sixth stanza.

“He’s ruptured his Achilles, I did that playing professional football at Coventry. I was 30 years old. I couldn’t stand, it was during a game,” he told Boxing News.

“It felt like someone had shot me in the back of the ankle and I just collapsed to the floor. I couldn’t put any weight on it. I couldn’t even stand.

“This is a 17st man, he’s ruptured his Achilles and he’s carrying on. It’s not normal, what he’s been able to do.

“I had to message him directly. The amount of respect I have for that man to even attempt to try and fight on is enormous. To be honest, I wasn’t really a fan [before] but after that kind of fight and the pain he was feeling, I’ve only got respect for the man.”

Haye has since had surgery on his ankle to repair the damage but he must now undergo months of recovery and rehabilitation to get back to normal.

It is not the first time the 36-year-old has suffered a career-threatening injury as a shoulder issue previously forced him into a four-and-a-half year hiatus.

McKenzie knows first-hand what lies ahead of Haye, but he was told personally by the former two-weight world champion that he is not thinking about retirement.

“I wish him a speedy recovery and he told me he’d be back, that just shows his mind-set. He told me that he would 100 per cent be back,” McKenzie continued.

“I was out for eight months with my injury, but he’s been operated on. Even with that he’s looking at six months recovery, at least, but for him to say ‘I’ll be back’ is a massive, massive deal. You can’t write him off.

“The rehabilitation takes a hell of a lot of time to rebuild it properly. I still have issues with running and things like that, although my body’s terrible, I’ve had every injury under the sun. But mentally getting back to the stage of being able to run or something, it’s very hard, let alone training and all that.”

Despite being a heavy underdog, Bellew boxed very well – even before Haye’s freak injury – and McKenzie feels he deserves full credit for the victory.

He said: “We can’t take away what Tony Bellew’s done, when you look at the actual strategy of the fight, Tony boxed and countered perfectly and accordingly. The first three, four rounds, although David caught him with a few good shots, Tony was countering and even hurt him a few times off the back foot.”