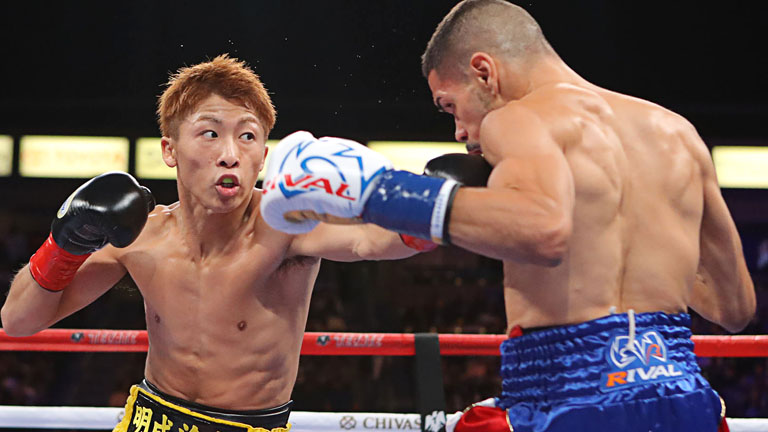 Antonio Nieves tells Lee Gormley exactly what it’s like to share a ring with Naoya Inoue, the man known as ‘the Monster’

WHILE Srisaket Sor Rungvisai’s second successive victory over Nicaraguan icon Roman Gonzalez and future Hall of Famer hogged the headlines from an impressive ‘Superfly’ fight night at the StubHub Center in California, there was another narrative that was hard to overlook in Carson. Before Gonzalez tasted the second defeat of his long and illustrious career and after Juan Francisco Estrada outscored Carlos Cuadras in a thrilling all-Mexican encounter, a monster was set loose in the same ring. Already a superstar in his native Japan, Naoya Inoue climbed through the ring ropes for the first time outside of the Land of the Rising Sun and shone bright on his United States debut.

Against game challenger Antonio Nieves, the reigning WBO champion at 115lbs enjoyed a sixth-round stoppage success in front of an admiring California crowd.

American challenger Nieves faced an uphill task against the man known as ‘the Monster’, who was aiming to impress and showcase his credentials to the US audience. But ‘Carita’ showed heart to battle on before his corner opted to call a halt to the bout in the sixth, and he was impressed by what was in front of him in the squared-circle that night.

“Yes I went six rounds and I could’ve continued to fight but my corner felt that it was time to stop it. The fight obviously didn’t go our way but no worries, I’ll be back,” stated Nieves. “Inoue is a great champion. He’s fast and has great power for the weight class and he is a very precise puncher.”

Inoue has become famed for his clinical and devastating body punching, a trait he was able to showcase in his most-recent outing, dropping Nieves in the fifth with a sickening left hook under the guard.

“You know, we expected him to be as good as he was. He does several things brilliantly in there,” outlined the Cleveland based fighter. “His jab was fast and he knew not to let me get set. He was very strong and a very sharp puncher. He’s really a very skilled individual.

“He caught me with a good front of the liver shot while I was moving back, but pretty much everything else down low I caught on the elbows. But he’s a very good body puncher.”

At just 24 years of age, many fighters are on the ascent in boxing and regarded as prospects to watch out for in the near future, but Inoue has already reigned supreme in two divisions

Nieves witnessed first hand what Inoue can offer inside the ring ropes in their super-flyweight battle and he has no doubts over who is currently the best fighter in the division.

“Right now, he’s the best in the division, until someone else proves otherwise.”

With Gonzalez potentially now out of the picture in the booming weight class, Inoue is seen as the heir to his throne, the man who can go on and dominate, as ‘Chocolatito’ considers his future following such a thumping stoppage defeat.

“It was bad! I think he was out for several minutes. I’m glad he came out of it ok,” outlined Nieves regarding Gonzalez’s stunning loss.

“I don’t know, hopefully he gets rest and hopefully he makes the best decision for himself and his family. He’s a great guy and I respect him a lot. I wouldn’t want to see him get seriously hurt.”

As for Nieves himself, the American fighter holds rejuvenated hope and aspirations despite his loss to Inoue.

“I’m taking a while off now to let my body rest then I’m back to it. I am hoping to get another fight before the year ends and start making my way back to the top,” he said. “Even though I wasn’t victorious in my last fight, being at the top of the sport fighting for a world title has made me even more hungry to win a world title myself.

“Mark my words, I’ll be back with a vengeance. I promise you that.”